SINGAPORE -- Casey Lai sits behind the counter at House of Hung, a jeweler at the northern end of Singapore's Orchard Road. Under the glass is an array of diamonds -- cut, but unset -- gleaming blue-white beneath the sharp shop lights.

"One of the worst mistakes you can do is walk into a jewelry store and make a decision based on your eyes," Lai said. "How you see diamonds under different types of lighting is very different. All jewelry stores, including us, use these calibrated LED lights. This kind of light makes everything look good. Even if I take a [glass] crystal, under this light it looks fabulous. So, good diamonds, bad diamonds -- under this light, it all looks the same."

Lai is one of three partners who founded an upstart in Singapore's jewelry business, JannPaul, from within House of Hung. Their business has no bricks-and-mortar store, but has built its presence online, focusing its attention on "millennials" -- people who became adults around the year 2000 -- who are accustomed to making their buying decisions online.

JannPaul's YouTube channel teaches potential clients how to assess diamonds for themselves. A full e-commerce site is the next step, and is in the works. "Nowadays people are more tech-savvy. They want to do their research. They want the best value for money," Lai said. "The whole industry is changing." 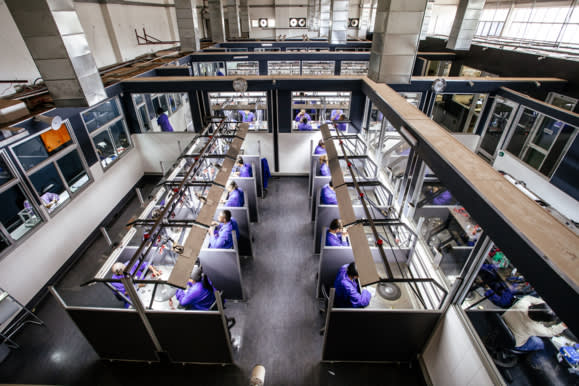 Diamond trading is a business that has for centuries hinged on relationships between buyers and sellers, and on a degree of opacity that makes pricing a difficult art. Today, through a combination of technological innovations, demographic changes and the shifting economics of the industry, that process is finally opening.

The disruption is being felt far beyond the shopfronts, including in the guts of the diamond trade, where rough and newly-polished stones circulate before they arrive at stores.

For De Beers, the South African group that is the industry's biggest player, the transition started slowly but has gathered pace. The company still sells most of its rough stones through a closed and arcane process called "sightholder sales." 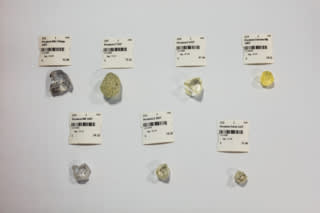 The sightholders are De Beers' biggest customers, who commit to buying a significant and consistent quantity of diamonds. These sales take place person to person, 10 times a year, in a high security facility in Gaborone, the capital of Botswana, which is home to the company's largest mine, Jwaneng. Customers such as KGK, an Antwerp-based diamond group, buy mixed lots of diamonds which they inspect in private in small rooms.

Since the 1960s, the company has supplemented this process with physical auctions to the wider market, held in diamond centers such as Antwerp, Tel Aviv and Hong Kong. "That really operated in a way that was very consistent with how the industry operated," said Neil Ventura, executive vice president of De Beers Auction Sales.

"That was face-to-face, bilateral negotiations ... We might invite you forward to come to the negotiating table ... and we'd offer you some diamonds. I would start high, you would start low, and we'd end up meeting in the middle." 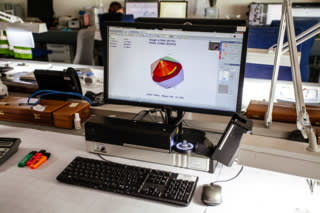 A gemologist maps the inside of a diamond at De Beers' Sightholder Sales in Gaborone, Botswana (Photo by Peter Guest)

That process continued until 2008, when De Beers put the auctions online. "It caused quite an uproar in the industry, because it was such a break with tradition, with many decades of the industry norm. It was unsettling for some," Ventura said.

Today, around 10% of De Beers' total sales goes through these auctions -- equivalent to 3 million carats per year. The auctions may be online, but the stones still tour the world so that customers can inspect them before they bid. This year, that will include a stop at the Bharat Diamond Bourse in Mumbai, after the Indian government relaxed its rules to allow the diamonds to be temporarily imported and exported again after inspection.

The Bharat bourse is the beating heart of the diamond-cutting business in India, where 80% to 90% of the world's diamonds are processed. Many cutting companies are small, family-owned businesses which are vulnerable to market fluctuations and need flexibility in their supply of rough stones. These so-called "mid-stream" companies suffered badly in 2015, when an unexpected slowdown in demand in China created a glut of stones that is only now being shifted. 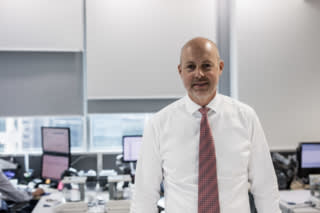 According to Ventura, access to more auctions could help these smaller companies meet their supply needs more efficiently. It could also be an extra route to market. Flush with the success of the platform, since November, De Beers Auction Sales has been running a trial from its head office in Singapore, allowing a handful of mid-stream companies to sell polished stones through its online auctions -- rather like an "eBay for diamonds."

The company has created a strict certification regime, combining certificates of origin with the technical information used to process the diamonds. Modern polishers use sophisticated scanning equipment to map stones before they are cut; this can be used to provide an additional layer of data about the diamond when it is sold. This, in turn, opens another interesting prospect for Ventura.

"If we can provide customers with the right data and visuals and all the right information ... is there scope to get into this whole virtual viewing space? Do you need to always follow the conventional norm of always shipping products around the world?" he said.

An additional beneficial effect of online auctions is that the company can see in real time how the market prices diamonds. Down the road from DBAS, a start-up is taking that notion a step further. Launched in May, the Singapore Diamond Investment Exchange is an ambitious attempt to "financialize" diamonds, turning them into an asset class on a par with gold.

"The wholesale market is a closed market for diamond traders ... You and I, as men on the street, don't have access. We wish we could, because the difference in price between the wholesale market and the retail market is quite substantial," said Alain Vandenborre, the exchange's executive chairman and founder.

SDIX has built an electronic trading platform -- similar to a stock exchange -- for polished diamonds, with 17 sightholders as members. Vandenborre believes that meshing existing stock exchange systems with technology used in the diamond business -- including a machine that can grade stones automatically -- could take much of the subjectivity out of valuing diamonds, turning them into something approaching a commodity.

Speaking privately, several industry players said that they are taking a wait-and-see approach to this platform, since previous investment funds and vehicles have not taken off. Asked if the "commoditization" of diamonds concerned them, they said that they do not expect volumes through investment channels to come close to demand from the jewelry market, meaning that values are unlikely to be eroded. However, Vandenborre said the industry is coming round to the idea that this kind of transparency has huge potential advantages. Standardizing the value of diamonds, making them fungible and easy to price, might mean that they could -- like gold -- become part of the financial markets.

"The reason that we have so much support from the diamond industry is that they can't wait to sell diamonds to an investor. They've always been trying to sell you diamonds as an engagement ring," Vandenborre said. "I want to bring people who used to buy diamonds as jewelry to see diamonds as a form of savings...