Governments and companies struggle for common ground amid shaky recovery

SANTA CRUZ, Philippines/JAKARTA -- In the eyes of Diosdado Alota, chief of Guinabon village in the northwest Philippines, the mining industry is key to his community's health.

Until the national government ordered a suspension of operations in 2014 over alleged river pollution, a nickel mine belonging to LNL Archipelago Minerals employed 80% of the village's men and annually financed 3 million pesos ($60,000) worth of road work, streetlights and other infrastructure.

"These anti-mining [campaigners] ruined everything," Alota said. "They say [mining] is destructive to the environment, but I believe natural resources are God's gift to people."

Not all villagers agree with Alota's view. On May 14, a number of them joined a group of 20 protesters for a Mother's Day rally against mining in front of the town hall in nearby Santa Cruz, whose surrounding hills have been stripped of vegetation by miners.

"The mining that we have is so destructive," activist Josephine Ignacio said to the group. "It kills the livelihood of the people and destroys our forests and rivers."

Since the inauguration of President Rodrigo Duterte last June, the Philippine government has been firmly on Ignacio's side. In February, Regina Lopez, a former activist serving as secretary of the environment, ordered the permanent closure of LNL's mine and three others around Santa Cruz, along with 19 elsewhere in the country, following an official audit. She also canceled 75 mining exploration contracts and banned new open-pit mines to protect freshwater sources.

The high-stakes confrontation has taken a toll on the country. Its mines, which make the Philippines the world's top producer of nickel, employ 236,000 people and, according to the industry, support the livelihood of another 1 million people.

Global prices for nickel, an important ingredient in steelmaking and batteries, have been affected, too, as the closed mines accounted for 10% of the world's supply. After the Philippine Congress Commission on Appointments voted against confirming Lopez in her post on May 3 amid heavy industry lobbying, nickel prices fell 2.5% on expectations of increased supply, reversing a gain posted after Lopez's shutdown order last September. 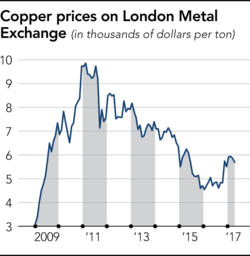 The turmoil in neighboring Indonesia is just as serious. A government push is forcing mining companies to invest heavily in local ore-processing operations and pressuring foreign players to yield majority ownership of their mines. This has put the fate of Grasberg, the world's largest gold mine and one of its biggest copper mines, into limbo. The mine's well-connected U.S. owner, Freeport-McMoRan, has trimmed output and laid off thousands of workers there -- a cause for serious concern in Jakarta given Grasberg's location in the volatile province of Papua and its position as one of the country's largest taxpayers. The speaker of Indonesia's lower house temporarily lost his post after he was accused of seeking a payoff to resolve Freeport-McMoRan's quandaries.

The showdowns in the Philippines and Indonesia come as the global mining industry has been shakily regaining momentum after a calamitous crash in commodity prices. Guarded optimism about the outlook for Chinese demand has seen prices tick up since late 2015, but some observers think the rebound may have already run its course.

Many foreign mining investors have given up fighting with Manila and Jakarta and taken their money elsewhere. Newmont Mining of the U.S. and its partners last year yielded control of a large copper and gold mine in eastern Indonesia to local investors in a $2.6 billion deal. 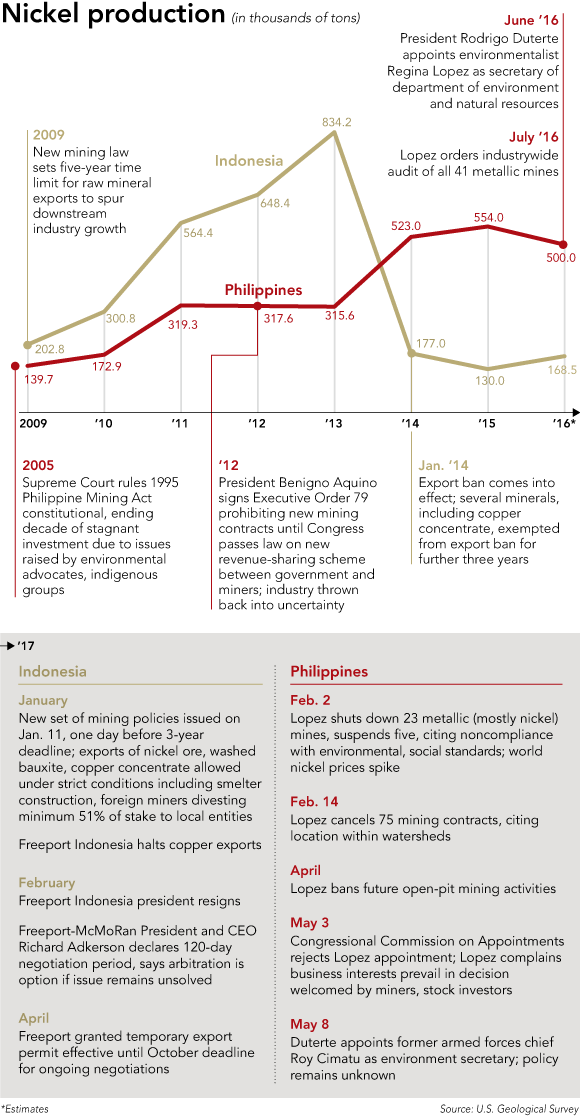 Both the Philippines and Indonesia ranked among the 10 worst governments in the world on the annual mining-sector Policy Perception Index published in February by the Fraser Institute, a Canadian research center, as did Mongolia and Afghanistan. None of those four were in the bottom 10 the year before, though Myanmar and Kyrgyzstan were.

In a wider Investment Attractiveness Index ranking by Fraser that factors in mineral potential too, India joined Afghanistan in the bottom 10 this year. Under Prime Minister Narendra Modi, however, India is working to shake off its reputation as a treacherous destination for mining companies. China, the highest-ranking Asian-Pacific market after Australia and Fiji, is working to balance conflicting priorities in reining in coal mine output.

Freeport is reluctant to exit Indonesia, despite its troubles, because Grasberg is a jewel too valuable to give up. Analysts have dubbed it one of the most profitable mines in the world and rate the quality of its deposits as high. Amid the standoff, Freeport has been weighing a plan to invest $15 billion to develop an underground mine at Grasberg after 27 years of tapping its open pits.

Freeport claims the government's demands would breach the official concession agreement, or "contract of work," signed in 1991 under authoritarian President Suharto. The company originally entered the country in 1967, the year Suharto came to power, and it has yet to shake the suspicions many Indonesians have of deals reached under his rule. Energy and Mineral Resources Minister Ignasius Jonan has said that Freeport is free to operate under the old contract, but only as long as it does not export, hardly an appealing option.

In 2014, Freeport agreed to pay export duties until it finished building a copper smelter in Indonesia and to divest up to 30% of its ownership in Grasberg. The smelter has yet to be built, however, and no share placement has gone forward.

"We're all going into this with goodwill and optimism about reaching a win-win situation," Richard Adkerson, Freeport's president and chief executive, said after meeting with government officials in early May. He said earlier the company's priority is to obtain "legal and fiscal certainty" beyond 2021, when its contract is set to expire.

Nickel Asia Corp. operates this mine in the Philippine province of Palawan. (Photo by Nozomu Ogawa)

The previous government of President Susilo Bambang Yudhoyono, the country's first directly elected leader, banned raw mineral exports as of January 2014 to step up the pressure for smelter investments to edge the country up the value chain of metals processing. In a last-minute policy change, exports of copper concentrate, a key material in electrical wires and motors, were exempted for three years.

This past January, the government said miners would have to commit to completing smelter construction within five years and to divesting foreign-held majority stakes within 10 years to resume exports, escalating the confrontation with Freeport. Nickel miners, however, received new clearance to export unprocessed ore -- much to the aggravation of Chinese companies that have invested in smelters. State-owned miner Aneka Tambang recently said that it had secured a one-year permit in March to export up to 2.7 million tons of low-grade nickel ore.

Jakarta backed down slightly in April by issuing Freeport a six-month copper export permit. Company and government negotiators are now to meet every week through October.

Some officials have publicly toyed with the idea of a state company taking over Grasberg. But the loss of Freeport would add to market jitters about Indonesia, where foreign investment grew only 1% in the first three months of 2017 from a year earlier. It would also deprive the government of tax revenue badly needed to support its ambitious infrastructure development plans. "The problem with the government is [knowing if] there is a real coordinator," said Yustinus Prastowo, executive director of think tank Center for Indonesia Taxation Analysis.

Many mining companies in the Philippines are still feeling their way ahead after Lopez's confirmation was blocked. DMCI Holdings, however, which owns one of the suspended mines near Santa Cruz and another elsewhere, began calling back some of its 1,200 laid-off staff "as soon as [Lopez] was rejected," said Cesar Simbulan, president of the company's mining unit, told the Nikkei Asian Review. 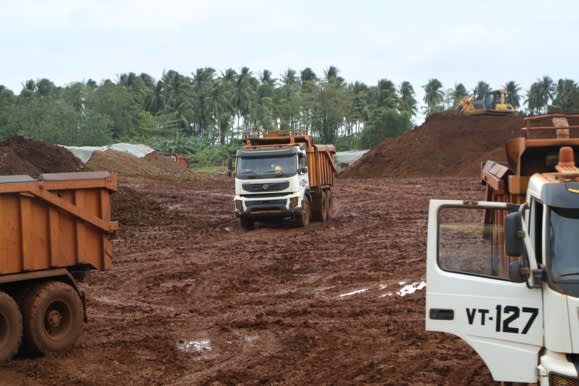 While Duterte has accused mining bosses of seeking to destabilize the government, Finance Secretary Carlos Dominguez, a former mining executive, said on May 11 that issuing operating suspensions "on the basis of unseen audits ... [will] never again" happen. "One could be environment-friendly and business-friendly at the same time. They are not mutually exclusive inclinations."

Lopez's replacement, former military chief Roy Cimatu, has struck a similar tone. On a visit to the Mines and Geosciences Bureau, he said, "It is now time to ... disabuse the public's mind about the misinformation and disinformation they have heard about mining." Simbulan described Cimatu as "very organized and regimented."

Nevertheless, a quick shift in industry direction looks unlikely. BMI Research, an affiliate of Fitch Ratings, said in a May 15 report that "the Philippines will continue to deter potential foreign investors in the country's mining space with its strict environmental laws, policy uncertainty and a social mindset that is anti-mining." Ronald Recidoro, vice president for policy and legal issues at the Chamber of Mines of the Philippines, said, "Even if policy stabilizes, most new investments will still depend on demand from China and global prices."

Mining policy in the Philippines has long been unstable, even though the government calculates the country has $840 billion worth of nickel, gold, copper, chromite and other mineral resources. A study by foreign chambers of commerce in Manila found that exploration has only been allowed on 2% of some 90,000 sq. km of potential mining land.

A new legal framework sought to put the industry on firmer ground in 1995, but it immediately came under challenge by environmental and indigenous groups. In 2005, the Supreme Court upheld the law, leading to new pledges of investment from companies such as Canada's TVI Pacific and Australia's OceanaGold. Benigno Aquino, Duterte's immediate predecessor, rattled industry nerves once again with a new policy framework in 2012 that included an increase in the government's share of private mining revenues. In 2015, Glencore, one of the world's largest mining companies, pulled out of a $5.9 billion project to mine gold and copper in Mindanao, which had been touted as the single largest foreign direct investment in the country's history.

The industry's rocky ride through the Philippines and Indonesia is almost certain to continue. In an unpredictable sector, that is one thing investors can count on.