SHANGHAI -- China's bitcoin mania has been greatly tamped down by a government that wants to control the cryptocurrency.

"We're getting fewer phone calls for inquiries," said a salesperson at Huobi, a digital currency trading platform based in Beijing.

"This is because withdrawals are controlled by regulations," the worker said with a resigned look. 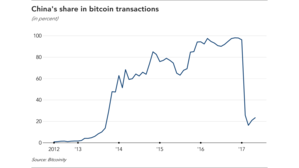 As elsewhere, bitcoin has surged in China. The yuan-denominated price topped 20,000 at one point -- quintuple year-earlier levels. At the same time, trading volume has bottomed out somewhat but remains less than a hundredth of a peak marked in November 2016. The Chinese share in the global market has plunged from more than 90% to just 20%.

The explanation is simple: the People's Bank of China. Despite government controls on cross-border flows of funds, sending money out of the country via bitcoin was easy, frustrating a central bank desperately wanting to keep the yuan from weakening and foreign-currency reserves from shrinking.

So in January, the PBOC launched inspections of three major exchanges, even mobilizing personnel from Shanghai. It banned margin trades and suspended fund withdrawals by investors. Such extreme measures naturally put a damper on sentiment.

Computer-aided automated trading also contributed to the rapid surge in transactions that continued through 2016. Generally offering bitcoin trades free of charge, exchanges in China apparently relied on interest income tied to margin transactions as a major source of earnings. But the ban on margin trading gave them no choice but to start charging for transactions. This threw cold water on automated trades designed to pocket small gains on spreads.

Trading volume has been gradually recovering since the PBOC recently eased the withdrawal restrictions. But the central bank is expected to soon introduce new rules for virtual currencies, keeping market players on edge. Five months after it tightened oversight, the center of bitcoin trading moved to Japan.

Bitcoin's trajectory in China reflects not simply the usual ups and downs of cryptocurrencies, but the nation's level of financial freedom.