TOKYO -- There is no telling what will happen next on the Chinese stock market, as it reflects the country's slowing growth.

But a closer look reveals China's structural economic slowdown and highly volatile asset prices are being driven by a decline in the working-age population ratio, which also resulted in burst economic bubbles in Japan and the U.S. If the pattern holds, Beijing may face a tough long-run environment.

All eyes on China

The Greek drama has largely ended, but the correction in Shanghai stocks could continue for a long time, said Norihiro Fujito, head of investment information at Mitsubishi UFJ Morgan Stanley Securities. The Shanghai Composite Index has trimmed its losses somewhat after plunging 35% from its recent peak to 3,373. But the benchmark index remains top-heavy, with strong selling pressure on rebounds. A stock plunge is usually followed by a bounce, and then often by a second bottoming out. 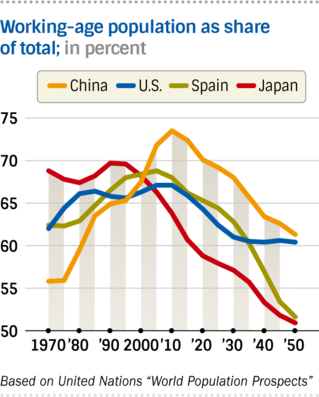 Many components of the Shanghai index remain suspended from trading. Fujito said the index is moving away from rock bottom.

The chart for the Nasdaq Composite Index in the U.S. around the time of the collapse of the dot-com bubble looks intriguingly similar to that of the Shanghai index from April 2014 through July 2015. Such patterns are common in stock market bubbles.

It will take some time for market players to discover whether the Shanghai index can level off, or whether it will crash through the floor as the Nasdaq did in 2000.

China's purchasing managers' index, released July 24, fell below the boom-or-bust threshold of 50, putting market players on their guard. Is the Chinese economic slowdown temporary? A country-by-country look at the working-age population ratio may offer a clue.

Japan experienced stock market and real estate bubbles around 1990, when the country's working-age population ratio peaked. Similarly, the U.S. experienced the dot-com and subprime mortgage bubbles in the 2000s, when its working-age population was at its maximum. In both countries, the potential growth rate had already begun declining, according to Ryutaro Kono, chief economist at BNP Paribas Securities (Japan). He pointed out that policymakers tried to keep their economies growing rapidly with monetary and fiscal stimulus, but these efforts created bubbles instead. In China, that ratio is expected to reach its zenith in 2010-2015. The nation's potential growth rate is already declining, while property prices are continuing their oscillation. Chinese authorities are calling the slowdown the "new normal" as they try to engineer a soft-landing, but repeated interest rate cuts since last autumn and measures taken to support the sagging stock market have backfired.

On the other hand, in the view of BNP Paribas Securities' Kono, China will not see a full-scale collapse, thanks to steps it has taken to slow the economy's descent. But he warned that radical moves to prop up stock prices could inflate another bubble.

China's slowdown is also having an impact on prices of commodities that are consumed in high volumes in China. Copper prices, for example, have been falling for a while. Shares in major U.S. copper producer Freeport-McMoRan traded sharply lower last week. Falling commodity prices are a heavy blow to economies of Indonesia and other resource-producing countries, depressing their currencies.

Nor are manufacturers immune. Slowing exports to China are dragging the shares robot maker Fanuc and other Japanese machine tool makers into a correction phase. So far, shares of companies sensitive to overseas tourism in Japan have only taken a small hit. But downward pressure appears to be building. Mitsubishi UFJ Morgan Stanley Securities' Fujito said slower growth in China is likely to hurt the earnings of Japanese companies in the July-September quarter.