HONG KONG -- Hong Kong is poised to become the world's largest initial public offering hub for the second consecutive year in 2016. But the absence of heavyweight candidates and high valuations offered in China's domestic A-share markets might strip the city of the title next year, according to market watchers.

Accountancy EY, for instance, forecasts that Hong Kong could print 207 first-time share sales worth a total of 200 billion Hong Kong dollars ($25.78 billion) in 2017, compared with this year's HK$196.1 billion raised in 117 transactions. But it warned that the current forecast was fairly "optimistic" and prone to downward revision. 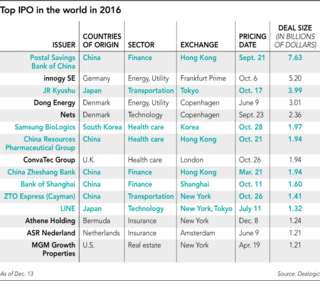 "About 40-50 billion Hong Kong dollars would be lost if certain fintech companies don't opt for Hong Kong," said Ringo Choi, EY's IPO leader for Asia Pacific, at a briefing on Monday. "That is almost like losing a jumbo deal matching [the IPO of] the Postal Savings Bank of China." At HK$59.15 billion, the Postal Bank IPO was the largest deal to list in the territory and the world this year.

Choi said Hong Kong still stood a chance of being one of the top three IPO markets next year, but competition would be stiff. "Shenzhen and Shanghai could be among the top three if their IPO activities were at full throttle," said Choi. "And if various internet finance companies choose to list in New York, Hong Kong might slip out of the top three."

Shanghai-based Zhongan Online P&C Insurance, China's first online-only insurer held by Ant Financial, Ping An and Tencent Holdings, is likewise preparing for a listing in Hong Kong and the U.S. by February 2018, according to Bloomberg. 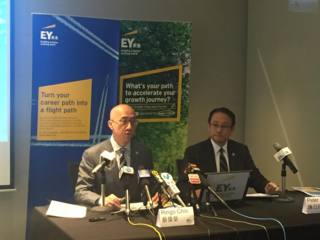 "The probability of some of them coming to Hong Kong is low," said Choi, adding that the city's "one share, one vote" system, as opposed to the dual-class share structure in other jurisdictions, might hold some companies back. Other impediments include the lack of a regulatory framework for emerging industries, limited comparables in Hong Kong for price discovery, and investors' unfamiliarity with the business models of startups.

Meitu, a selfie editing app and phone maker based in China's southeastern Fujian Province which will start trading on Thursday, priced its IPO at HK$8.5 apiece, the low-end of the indicative range. Moderate demand for the eight-year-old startup was attributed to its loss-making position. In the six months ended June, the company reported that its loss widened by 72.5% to 2.19 billion yuan ($317 million) from a year ago.

Jack Ma, who ditched Hong Kong for New York when listing of his Alibaba in 2014, told the South China Morning Post, which he also owns, that Hong Kong's existing IPO regulations were "not relevant to startups and new businesses" as they were "designed decades ago before the internet age for property developers, banks, financiers and traditional retailers."

Beijing-based microlender Qudian, which started out as an installment payment e-commerce platform targeting college students called Qufenqi, had reportedly approached four banks in preparation for an IPO worth at least $500 million as early as the first half of 2017. The two-year-old startup, also backed by Ant Financial, favors New York for its market debut, according to local media Caixin.

This year, eight Chinese companies listed in the U.S., of which six chose the Nasdaq platform. They raised a total of $2.15 billion, up 4.8 times compared to last year, including Shanghai-based delivery company ZTO Express's $1.4 billion IPO, the largest offering for 2016 in New York.

But Choi said he hoped Hong Kong would not scrap its current egalitarian regime. "Should we abolish it just for an industry or two," Choi said. "Don't forget that many companies also delisted themselves [from the U.S.] and returned to the A-share market, which runs on a 'one-share, one-vote' basis."

Attractive valuation, said Choi, was the key impetus driving issuers to the A-share market, in spite of its unpredictability. China's IPO market had been suspended thrice indefinitely since 2007. "It's very easy for a privately owned company to become worth 10 billion yuan [on the A-share market]," said Choi, noting that the average price-to-earnings ratio of A-share IPOs is about 21 times.

In terms of average rate of return, A-share stood at 416% as of Dec. 9. That compares with Hong Kong's 172% and the U.S.'s 23% in the same period, according to EY. The hefty returns has made the A-share market "the first-choice" for a lot of Chinese companies, said Choi.

There are 731 enterprises on China Securities Regulatory Commission's IPO waiting list as of Dec. 9. The backlog had been reduced from a peak of about 850 companies as the approval process had accelerated since June. In November alone, 52 companies were given the green light for issuance, which represents the total number logged in the first five months of the year.

Six of the 10 largest deals on the A-share market were from financial services companies. Topping the league was Bank of Shanghai, which printed 10.37 billion yuan in a Shanghai IPO in October. Against the backdrop of deteriorating asset quality and an economic slowdown, eight city commercial banks tapped a total of 29.43 billion yuan from the A-share market this year.

This trend was mirrored in Hong Kong, which saw nine of its top 10 issues from financial services companies. Most of these deals were priced at the low-end of the offer range, with strong support from state-backed cornerstone investors, who generally agreed a six-month lockup in advance for a sizable chunk of the deal. About 53% of total funds raised from Hong Kong's IPOs were provided by cornerstone investors, up from 18% a decade ago, data from Dealogic shows.

In line with the shrinkage of IPO markets across the globe, Hong Kong's average deal size fell to a three-year low of HK$1.68 billion each. Only three deals were above HK$15 billion, versus five in 2015.

KPMG also put a HK$200 billion forecast for Hong Kong's IPO in 2017, suggesting half of the sum would be raised on the Growth Enterprise Market board. The accountancy said it had also factored in potential deals from Kazakhstan, which is reportedly eyeing offshore IPOs for five companies with an estimated book value of up to $6.5 billion as part of its privatization drive. That includes its national flag carrier Air Astana and the state-owned oil and gas company KazMunaiGas.

The oil-rich Central Asian country, which is also a strategic partner of China's Belt and Road initiative, was pitting London against Hong Kong for listing destinations, according to the Financial Times.

Meanwhile, state-owned oil refiner China Petroleum & Chemical, also known as Sinopec, is reportedly resurrecting a Hong Kong flotation of its retail business. The deal, mooted in 2014, could fetch as much as $10 billion.