TOKYO -- Metal and automotive stocks sank in Asia on Friday amid concerns that U.S. President Donald Trump's decision to impose tariffs on steel and aluminum imports will spur protectionist policies around the world.

Nippon Steel & Sumitomo Metal dropped as much as 4.4% before ending down 3.81% on the Tokyo Stock Exchange. Another Japanese steelmaker, JFE Holdings, fell 3.7% before closing down 2.8%. Japanese steelmakers do not rely very heavily on exports to the U.S., and are expected to suffer little direct damage from Trump's plans. But the tariffs could push Chinese and South Korean players to redirect shipments that would have gone to the U.S. to the rest of Asia instead, driving prices down. 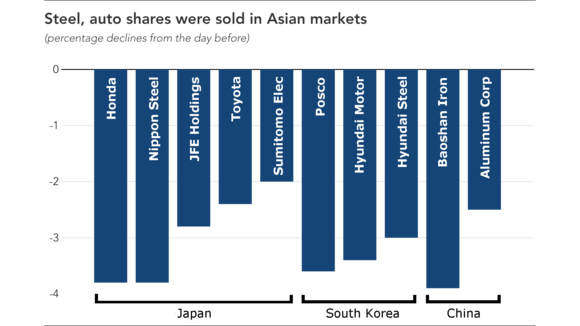 But the rise of protectionism could slam the brakes on the global economy. Trade will suffer if China and the European Union decide to retaliate against the U.S. with tariffs of their own.

"If the situation becomes more serious, a wide range of industries from machine tools to aircraft will be affected," said Takashi Ito of Nomura Securities.

The U.S. also introduced additional tariffs on steel imports back in March 2002. Investors then unloaded their shares in steelmakers and other companies, and Japanese stock prices declined toward the end of that year.

Stock markets may be similarly affected this time around. "We can't really actively buy stocks until uncertainties are eliminated," said Hiroshi Matsumoto of Pictet Asset Management.