Greece's Golden Visa program, launched in 2013, entitles people who invest more than 250,000 euros in real estate to five-year resident permits. This has helped lure Chinese hungry for overseas investments. Spouses and children under 21 are also entitled to the permits.

Chinese buyers, who account for 40% of the country's total investment, are expected to boost property prices, buoying Greek's sluggish economy.

China builds clout with boatloads of cash for Greece

Greece, at the epicenter of the European debt crisis, fell heavily into debt after the window-dressing of its balance sheet was revealed. The country has been on financial life-support provided by the European Union and other organizations since 2010. In exchange, Athens has been forced to implement severe austerity measures, such as cutting the pensions and salaries of civil servants, prompting many to move their assets overseas.

The country is now banking on foreign capital to boost the economy. Because of this, Greece is thought to have the most lax requirements among European countries that have similar invest-for-residency schemes.

The permits can be renewed on condition of continued ownership. Because Greece is a signatory to the Schengen Agreement -- under which there are no border controls between member nations -- anyone with a Greek resident permit can travel freely through most of the EU and some other European countries. 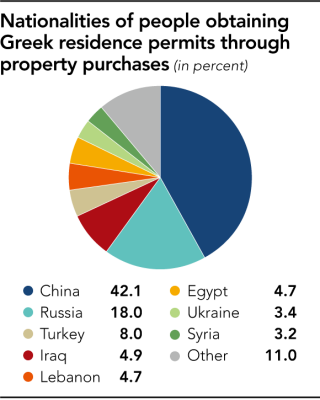 Government data showed that 2,014 foreigners purchased properties under the Golden Visa program through September, with property investment and related income topping 1 billion euros. Issuance of the resident permits, including family members, is increasing yearly, reaching 1,567 in 2016, up 80% from 2014.

Through September, 850 Chinese bought properties and 2,091 Chinese obtained the permits, accounting for more than 40% in both categories.

After seeing Chinese traffic to the English version of its website triple over the past year, Greece's Spitogatos Network plans to offer a Chinese version.

Greeks are welcoming China's increased presence due to its status as a big employer. This is in stark contrast to feelings towards Germany, which is pushing severe austerity measures onto the populace.

Citizens from authoritarian countries such as Russia, Turkey and Egypt are also swelling the ranks of permit holders under the Golden Visa program. After an attempted coup in Turkey last year and the 2013 toppling of Egypt's government, wealthy individuals from both countries began investing more in foreign real estate to protect assets.

According to revised figures released in October, Greece's gross domestic product in 2016 fell 0.2% from the previous year, the second straight year of negative growth. GDP is expected to be positive this year, but only at about 1% due to delays in talks with lenders.

Residential property prices have dropped by nearly half since the second half of the 2000s, before the debt crisis erupted, with the number of transactions declining sharply. Many Greeks purchased high-priced real estate in the early stage in the crisis, in a bid to protect assets. Now, non-performing real-estate loans have been weighing on the earnings of banks.

However, Alexandros Nikolaidis, a real estate broker in Athens said property prices are rising again, as supply has stopped and vacation rentals have become popular.

China's investment in overseas real estate has gradually risen since the 2000s, reaching a record $38.3 billion in 2016, according to a private survey. Chinese are big investors in the U.S., U.K and Australia, among other countries.

According to a survey by Morgan Stanley, the U.S. was ranked as mainland China's biggest investment destination at 43% in 2016, followed by Hong Kong, Australia and the U.K.

In the latest July-September period, however, Australia took the top spot at 31%, followed by the U.K. at 25% and Hong Kong at 22%, with Canada and the U.S. each attracting 8% of overseas real estate investment, according to data from U.S. property consultancy Cushman & Wakefield.

Greece did not rank among the top destinations.

That said, Chinese investment in overseas real estate could rebound to previous levels by the end of the year as several large projects are planned, said a C&W representative.