In the global real estate market, New Zealand used to be something of an unknown quantity. It was considered too small to attract the attention of big corporate investors and sufficiently illiquid to frighten off all but the bravest individuals.

That changed in 2014 with a surge in large investments. The shift looks likely to be sustained amid robust economic growth, attractive yields and an accommodative tax regime.

Traditionally, local and Australian investors have had the New Zealand market largely to themselves, together with occasional wealthy and intrepid Asians. But no fewer than six global institutional investors entered the market last year: Credit Suisse; GIC Private, formerly known as the Government of Singapore Investment Corp.; Germany's Deka Immobilien; the U.K.'s Forum Partners; Canadian pension fund PSP Investments; and Aviva Investors, then the Asian property arm of U.K.-based Aviva but since sold to JPMorgan Asset Management.

As in other markets, Chinese buyers have become a significant presence in New Zealand's property scene. Developers Fu Wah Group and Shanghai Pengxin have made substantial investments in the last 18 months, with Fu Wah acquiring a waterfront site in Auckland to construct a Park Hyatt hotel.

It is no coincidence that 70% of New Zealand's ethnic Chinese population lives in Auckland. The city, the country's largest, is a major international magnet for Chinese emigration. It is also a hot spot for house prices, which surged 26% in the year to June, according to the Real Estate Institute of New Zealand. The rapid increase in prices has been recently linked to Chinese immigration by the opposition Labour Party, although the country's Race Relations Commissioner, Susan Devoy, has accused the opposition of using "half-baked data." 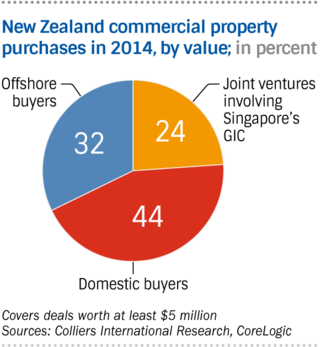 Commercial investment interest is also highest in Auckland. By value, the city accounts for more than 68% of commercial property sales in the country, followed by Wellington and Christchurch. The standout buyer last year was GIC, which invested more than $1 billion in two joint venture deals. It took a 49% stake in a group of five retail malls with Australia's Scentre Group, and a 49% stake in four Auckland office assets with Goodman Group, also of Australia.

Following closely in second place was PSP Investments, which acquired a 19-asset portfolio from AMP Capital Investors for $803.7 million.

Among offshore groups investing more than $5 million, the total value of transactions exceeded 3 billion New Zealand dollars ($1.96 billion).  This was an eightfold increase over the previous year, and a level not seen since 2007. Significantly, more than 60% of these transactions, by value, involved new market entrants.

With more than NZ$1 billion of retail assets alone currently up for sale in New Zealand, there is a strong likelihood that at least one or two more major new players will enter the market.

Part of the explanation for this flood of funds is global investors' insatiable appetite for better returns. Real estate is increasingly replacing fixed-income investments, which are burdened by historically low yields. With official interest rates at a relatively low level of 3% and prime grade investment yields at 7.7% for office properties, 6.6% for industrial, and 6.25% for retail, commercial real estate in New Zealand offers spreads of up to 4.7 percentage points over the official borrowing rate.

On the macroeconomic level, a large part of the attraction for offshore investors is the strengthening of New Zealand's economy, with the key indicators showing positive numbers. After a 3% contraction in 2009, gross domestic product growth has mostly stayed on an upward trajectory, with a 3% rise posted for 2014. Unemployment is hovering around 6% and is forecast to fall to 5.4% in 2016. That is an improvement from the near 8% levels experienced in the depths of the global financial crisis that began in 2007, although still some distance from the 4% level experienced between 2004 and 2008.

The primary drivers of growth have been the dairy, tourism and construction sectors, with the latter greatly strengthened by reconstruction efforts after major Christchurch earthquakes in 2010 and 2011. With demand for New Zealand dairy products running at an all-time high, offshore groups including Shanghai Pengxin, Singapore-based Duxton Asset Management and Germany's Aquila Capital are entering the market. Shanghai Pengxin has raised some eyebrows domestically by declaring its intention to double its current investments to NZ$1 billion, prompting calls by some groups for closer monitoring and possible restrictions on foreign acquisitions of agricultural land.

New Zealand's property market has also benefited from a series of taxation reforms by the conservative government. The top marginal rate of income tax has been cut from 66% in 2000 to 33% in 2010, and corporate taxation fell from 48% to 28% over the same period. The country's goods and services tax was raised from 12.5% to 15% in 2010. These changes have positioned the economy for further growth and will help to attract inbound investment.

Combined with a zero rate of stamp duty and no capital gains taxes on real estate transactions, the taxation reforms arguably give New Zealand a competitive advantage over Australia when it comes to minimizing tax leakage on investments. With a progressive, stable government and a growing economy, it is clear that New Zealand has largely overcome the long-held concerns of institutional investors about market size and liquidity risk. Sam Biggins is a senior manager with Colliers International in Singapore, responsible for facilitating Asian investment into Australia and New Zealand.