JAKARTA -- The bangs and screeches of heavy equipment are relentless as construction workers buzz around outside the building, eager to get their jobs done on time. Inside, it is a different story as marketing staff chat quietly at a receptionist desk, idly waiting for customers to enter.

The subdued atmosphere at the Ciputra Development marketing office in Jakarta is indicative of the depressed state of the local property sector. But the impressive project models in the spacious showroom reflect the industry's hopes that an inflow of funds from wealthy Indonesians repatriating savings from abroad under a temporary tax amnesty will fuel a revival.

Ciputra is preparing to launch a two-tower apartment complex in the capital in late September, with an eye toward the amnesty which Chief Executive Candra Ciputra said previously that he "really longed for." Fellow developer PP Property is preparing high-end apartments on the outskirts of Jakarta as well as in big cities such as Surabaya and Semarang for amnesty investors. Other developers such as Mayapada and Sinarmas Land are developing mixed-use projects.

In contrast, Intiland Development and Agung Podomoro Land are focusing on promoting projects already underway rather than developing new ones to attract amnesty investors. Intiland Corporate Secretary Theresia Rusia said this is because her company expects amnesty investors to favor existing properties over planned ones.

Property has been widely touted as one of the sectors that could benefit most from the program, after the government included mortgage-backed securities and real estate investment trusts as on a list of eight recommended investment instruments for taxpayers repatriating assets.

Real estate consultant Indonesia Property Watch has predicted that 60% of all repatriated funds will be invested in property, particularly at the luxury end, which is seen as offering a high return on investment due to rising values. State-owned Bank Tabungan Negara received 100 billion rupiah in the first 10 days after being designated as a gateway bank to receive repatriated funds, of which some 30% was put into REITs or mortgage-backed securities. Officials from developer Pakuwon Jati have reported a significant jump in sales of properties priced at 1 billion to 5 billion rupiah, with several high-rise projects nearly selling out.

Hanafiah Ponggawa and Partners, which provides legal advice on property issues, said it has received many inquiries about tax amnesty implementation in the real estate sector. 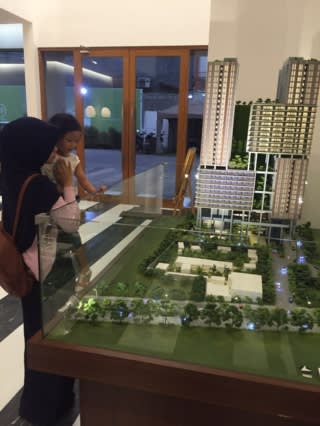 A prospective buyer looks at a model of one of PP Property’s high-end apartment projects. (Photo by Ardi Wirdana)

"Other than the hope of profit from valuation increases, if done smartly, investment in property can be an investment that is productive, such as by renting it out to other parties or choosing commercial properties like ruko (shop houses) to be rented out or used for business," said Al Hakim Hanafiah, the law firm's founder.

The real estate sector is still trying to recover from a slump last year when residential property in particular showed slowing growth in terms of both prices and sales, a development which analysts blamed on regulatory policy changes.

More supportive policies since late last year, such as an easing of foreign ownership rules, new tax incentives for REITs and reduced down payment requirements, have seen some rebound in sentiment. This helped set the stage for the tax amnesty, but developers have become concerned about the slow inflow of repatriated funds.

Almost a third of the way into the program, repatriated funds have reached 12.9 trillion rupiah, or a meager 1.2% of the target, even though funds repatriated after Sept. 30 are to be taxed at a higher rate.

Developers remain upbeat but some now expect to see a bigger impact from the tax amnesty next year. "In our view, it looks like the realization of taxpayers investing in the property sector will happen in early 2017, after they have settled their tax amnesty matters up until the end of 2016," said Agung Wirajaya, assistant vice president at Agung Podomoro Land. The second quarter of 2016 has seen better growth compared to the same quarter last year, he added.

"If early in 2017 a lot of funds are invested into the property industry, then market trust toward property will improve, not only among taxpayers participating in the tax amnesty, but also with the Indonesian people in general. Therefore, the property industry will be revived," Agung said.