Thai developers lay on glitz, and lots of marble, to sell high-end homes Several major high-end projects have been completed or are underway, and more are planned as developers shift away from the increasingly saturated mass condominium sector -- a trend fueled in part by growing interest among rich Chinese, Singaporean, Japanese and Hong Kong buyers.

Thailand permits foreigners to own condominiums outright, and most listed Thai developers are increasingly marketing their luxury projects directly to wealthy foreigners, as well as to locals. In 2016 condominium projects along Bangkok's iconic Sukhumvit Road sold out their foreign quota -- 49% of the available units -- to buyers from China, Hong Kong and Japan.

Domestically, a shift is also taking place among affluent urban Thais, according to James Pitchon, executive director of research and consulting at CBRE (Thailand), a property advisory group. Pitchon said high-income homeowners are increasingly moving from large suburban mansions to condominiums and apartments in central Bangkok.

"Bangkok has become a more inward-looking city, where we have now a greater concentration of facilities and attractions in the city center," he told the Nikkei Asian Review. "So the best hospitals, the best restaurants, the best shopping centers are downtown, and many of the younger generation work in the downtown area."

With prime locations and palatial interiors, developments targeting wealthy local and foreign buyers cost more than 300,000 baht ($8,655) per sq. meter on average -- more than double the price in the domestic midrange market.

The latest market offering, launched by Sansiri, one of Thailand's largest property groups, is a $246 million project at 98 Wireless Road, in central Bangkok, where prices for most of the 77 apartments ranged from $2 million to $8.5 million. Half of all units were sold ahead of the March 14 official launch, including a penthouse that went for 650 million baht to a buyer from Hong Kong.

"We came up with one of the best residential properties in the country, and maybe in Southeast Asia," Sansiri's chief executive, Apichart Chutrakul, said at the launch. Apichart expressed confidence that sales to foreign buyers would reach the 20% target set for the project. 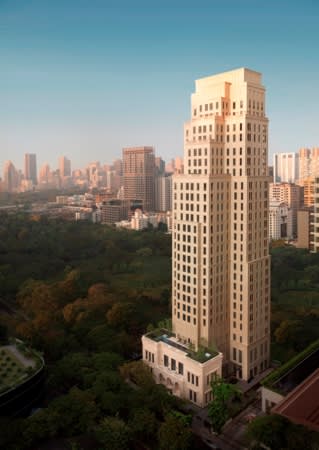 The latest market offering, launched by Sansiri, is a $246 million project at 98 Wireless Road, in central Bangkok, where prices for most of the 77 apartments ranged from $2 million to $8.5 million.

Overseas property giants have been quick to get in on the act.

However, Pitchon noted that Sansiri's efforts to distinguish itself from competitors were crucial in driving the increasingly sophisticated local market.

"The buyer is asking 'what's so good about this -- what kind of materials are you using? What type of kitchen appliances are you providing?' So you can't just say, 'It's luxury,' and slap a label on it. There has to be tangible benefits, and [sellers need] to say, 'We have provided the best materials, and here is our proof,'" he said.

Apichart is clear about the target buyer -- whether they are foreign or local. The people who buy luxury condominiums "don't worry about the cash in their pockets. They are worried about the situation for themselves. If they feel good, they buy everything," he said.

The Sansiri project demonstrated that the use of top materials is a key selling point for luxury condos. At Wireless Road these include rare mahogany door panels and solid oak herringbone floors from the U.S., with hand-carved moldings and Portuguese limestone flooring in the lobby, public areas and balconies -- plus slabs of pure white Statuario Carrara marble from Italy.

Apichart said sales had begun ahead of the official launch date. "With Sansiri we have long-term clients and some of the [senior] statesmen -- who ask us not to name them -- who want to buy ... before everybody else," he noted. "We sold 50% of the project [ahead of the launch] because of our friends and older clients."

The Wireless Road project is the latest in a series of luxury apartment blocks underway or in the planning stages. A front-runner in terms of price is the Mandarin Oriental Bangkok Residences, with 146 luxury waterfront units ranging from 130 sq. meters to 230 sq. meters along Bangkok's riverfront.

The 710-sq.-meter penthouse was priced at 620,000 baht per sq. meter, a record for the city. Visit Malaisirirat, managing director of the developer, ICONSIAM Superlux Residence, told local media on March 14 that more than 60% of the units had been sold.

Pace Development, a leading Thai property and hospitality group, has also looked to capture the luxury end of the market with several properties, including its Nimit Langsuan "superluxury" freehold residences located near the popular Lumpini Park. The final seven freehold units were each being offered at 27 million baht in February.

Pace also announced recently that it had finished raising funds for an 8.4 billion baht investment in the capital's MahaNakhon skyscraper development. This project includes 209 freehold apartments called the Ritz Carlton Residences, starting from 65 million baht. They are described as "individually sculptured, graceful homes" set 314 meters above the city. Residents will begin moving in from April.

Despite the promising picture, analysts are divided about the sustainability of Bangkok's luxury condominium market. CBRE's Pitchon said the sector faced a potential squeeze in the face of rising land prices and limited numbers of local buyers, forcing developers to depend on foreign customers to make up for any shortfalls in sales.

Nathavut Shivaruchiwong, a research analyst at Deutsche Bank in Bangkok, also said affordability was a key risk, and noted that capital gains from luxury projects had generally diminished over the past two years.

However, he added, the sector may get a boost from a steady influx of "gray money" -- funds with uncertain origins -- as holders seek to launder illicit or undeclared assets. "That's the only way you can actually spend a huge amount of money and convert it to an asset [that] is clean," he said.

Andrew Gulbrandson, head of research for JLL (Thailand), a property advisory company, said the supply of new luxury apartments had increased "considerably" over the last two years, and competition for sites was likely to intensify.

But CBRE's Pitchon warned of challenges ahead for Bangkok's developers. "Land prices are likely to continue to rise, meaning developers will have to sell at higher prices," he said. "However, we are dealing with a very elite market that is quite finite. Not everybody can afford to spend several million dollars on a luxury condominium in downtown Bangkok."