TOKYO -- Prices of secondhand condominiums in Greater Tokyo are rising thanks to brisk investment activity. The value of used detached houses, however, is stagnating. This has some experts concerned about the true state of housing demand -- and what it says about the Japanese economy. 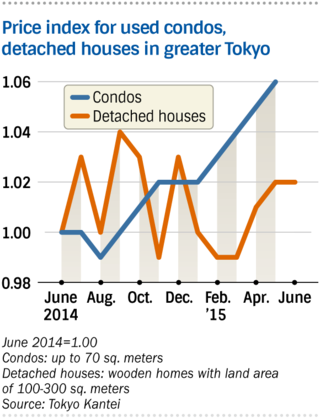 The price of used, wooden houses on 100-sq.-meter to 300-sq.-meter properties in Greater Tokyo averaged 29.52 million yen ($235,708) in June, according to real estate research company Tokyo Kantei. For the past year, the price has been hovering around 29 million yen; this was the first time in three months that it registered a month-on-month drop.

Most buyers purchase used detached homes to live in, rather than as speculative investments. When real estate developers acquire them, they usually tear them down and build new houses. Transactions involving used detached houses, therefore, are seen as a reflection of actual demand.

For the six straight quarters through January-March, the number of used detached home sales declined on the year, according to the Real Estate Information Network for East Japan.

Although the number jumped 11% on the year in the April-June period, prices of detached homes up to around 30 million yen -- an affordable range for general buyers -- have remained sluggish in Tokyo's suburbs. Used condominiums in Tokyo's waterfront Koto Ward are in demand. Detached homes in the capital and its suburbs are a different story.

The prices "have remained roughly unchanged and have even dropped in some areas," said Toru Kamizono, executive officer at Nomura Real Estate Urban Net.

By contrast, the prices of 70-sq.-meter secondhand condos in Greater Tokyo rose for the ninth straight month in May, Tokyo Kantei said. Soaring construction costs have been pushing up prices of new condos, prompting buyers to opt for less expensive used units.

Investors are increasingly looking at condos in central Tokyo and the capital's waterfront area. The weaker yen makes such properties relatively cheap for buyers from Hong Kong and Taiwan, for example. With money flowing in, prices are under upward pressure.

Japanese workers' total cash earnings have been declining on the year for more than two years, noted Satoshi Osanai, an economist at Daiwa Institute of Research. "The weak real economy has led to the slump in prices of detached houses."