TOKYO -- Nintendo ranks as the most heavily traded stock in the Tokyo market over the past year, as the company reclaimed its status as a top player in the video game industry with red-hot sales for the Switch console.

The company was so unpopular back in 2015 that the president of an electronic parts company wanted to be dissociated from the Kyoto-based game maker. "Please don't call us a Nintendo-related stock anymore," the president said at a news conference for an earnings release.

Inventories of Nintendo's disappointing Wii U device were building up at the time, leading to cuts in output plans that hurt electronic parts suppliers.

But three years later, critics see Nintendo in a completely different light. The Switch, a hybrid game system that serves as both a home console or a handheld, has been flying off the shelves. Its U.S. sales have outpaced those of a popular predecessor, the Wii, encouraging Nintendo to upgrade the sales target twice for the year ending this month.

Investors have shown their zeal for Nintendo, whose share price has more than doubled since the release of the Switch about a year ago. The stock's trading volume by value for the nearly concluded fiscal 2017 totaled roughly 25 trillion yen ($236 billion) as of Monday, more than twice the figure for second-place SoftBank Group.

Nintendo buys fewer parts from outside suppliers than Apple, yet is influential enough to lift profits at some electronic parts developers. Shares have skyrocketed 62% for Minebea Mitsumi since the debut of the Switch, as the company is thought to build the device. Hosiden, which also assembles the Switch, and supplier MegaChips have surged more than 30% each. 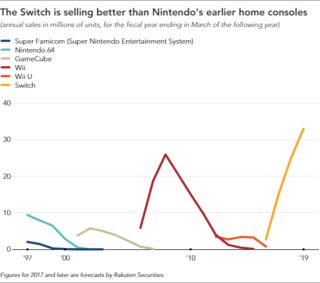 "The rally of parts suppliers will be followed by that of software publishers," predicts an official at Sumitomo Mitsui Asset Management.

Nintendo has been creating game content mostly on its own, but third-party publishers are set to benefit from the Switch's booming sales. One of the most promising developers is Capcom, whose shares hit a 17-year high Monday on strong earnings and growing hopes tied to planned titles for the Switch.

One big question involves whether the fervor for the Switch will be sustainable. Global sales will reach at least 200 million units, about twice as many as for the Wii, according to one estimate. Nintendo sees its operating profit more than quintupling to 160 billion yen this fiscal year.

Nintendo seeks to sell consoles even at a loss, with the company more than erasing the red ink through high-margin software. This business model means that profits usually would begin three to four years after releasing a new gaming system.

"It is highly possible that the company earns a record profit in fiscal 2019," predicts Hideki Yasuda at Ace Research Institute.

Video game sales generally are shielded from the economic cycle. As data at home and abroad hints at an economic slowdown, investors are shying away from blue chips such as banks and electrical machinery manufacturers -- making it even more likely that Nintendo and its suppliers will remain a driving force of the Tokyo market in the near term.