A Japanese ceramic repair technique teaches us to embrace our scars TOKYO "The wound is the place where the light enters you." These words, by the 13th-century Persian poet Rumi, sang in my head as I examined a simple ceramic bowl in a tiny cafe in a western suburb of Tokyo. The bowl had been elevated to a luminous, compelling objet d'art by the gold-filled cobweb of cracks snaking across it. 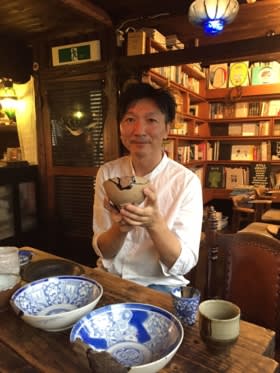 Light had indeed entered this bowl along the lines where it had once shattered, thanks to the particular Japanese art of repairing ceramics called kintsugi. The technique uses the sap of the urushi tree, a powerful natural adhesive, mixed with powdered gold.

Unlike other methods of repair like welding or gluing, kintsugi's power lies in its refusal to disguise the brokenness of an object. It does not aim to make what is broken as good as new, but to use the cracks to transform the object into something different and arguably even more valuable.

Kintsugi (kin means gold and tsugi means to join) is not just a practical craft, although it undoubtedly prolongs the utility of things. It is also a philosophy that speaks to the human condition. As with much of Japanese aesthetics, it is steeped in philosophical concepts rooted in Zen Buddhism.

One of these is wabi-sabi, an aesthetic ideal that emerged in the 15th century as a reaction to the contemporary preference for ornate designs and rich materials. In contrast, wabi-sabi saw beauty in the weathered, the aged and the imperfect. It found profundity in authenticity without garnish. Nature's cycles of growth, decay and erosion are embodied in frayed edges, cracks and rust. A wabi-sabi way of seeing embraces these markers of passing time. It is a difficult term to translate. In fact, it is an experience rather than a descriptive term. To behold a finely crafted, kintsugi-repaired bowl is wabi-sabi.

I was sitting in the bookshop-cum-cafe Rokujigen, run by Kunio Nakamura, a soft-spoken kintsugi practitioner who showed me an array of earthenware that he had recently repaired. Over bowls of steaming tea, we examined some pieces where shards of ancient pottery or colored glass had been inserted to make an object whole. Others featured the more classic technique of gold-dusted lacquer filling in fractures. But in every case, the act of repair was made plain by the deliberate use of disjunctive materials and textures. "The Japanese like cracks," Nakamura said. "The shapes of the cracks are like nature: a river, a tree. Each piece has a keshiki, a landscape."

TRUE CALLING Nakamura began his career as a television director for a program similar to "Antiques Roadshow." It was then that he started to collect pottery and teach himself kintsugi. But in March 2011, the most powerful earthquake recorded in Japan shattered parts of the country. Thousands of people were killed and hundreds of thousands of homes destroyed.

For Nakamura, it was a seminal event, one that spurred him to his true calling. "I realized we needed to repair ourselves, to remake things." He started holding workshops in some of the country's most devastated areas, encouraging people to bring in treasured ceramics that had broken in the earthquake and teaching them how to mend them. "For me, kintsugi was a technique of healing."

He gave up his TV job and started the cafe, where he now holds weekly kintsugi workshops attended on average by 10 to 20 people. To mend a broken object at one of these workshops costs only $20. The price is kept low by using silver and brass powder mixed with urushi lacquer, rather than gold dust. If gold is used, a skilled artist can charge hundreds of dollars for filling in a single crack, depending on the value of the object. But for Nakamura, democratizing kintsugi is an important goal, and he is meeting with some success.

VEINS OF GOLD One reason is that the craft's emphasis on reuse is in tune with the times. Kintsugi stands against a disposable culture of material excess. It stands for long-term use and minimalism. These are values suited to the current mood in Japan, which is undergoing a prolonged period of economic stagnation and deflation. 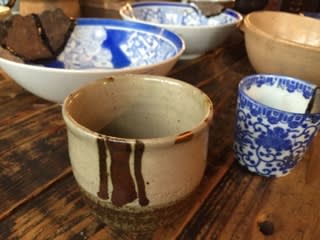 Moreover, Nakamura believes kintsugi to be in harmony with the emotional temperament of the people. "For us [Japanese], particular pieces of pottery are like family members. We cannot just throw them away." Kintsugi not only joins the broken pieces of a bowl but also welds the past to the present.

Nakamura pointed out his favorite teacup. Four tiny sparkles of gold glinted from its rim, where chips had been filled in. "Maybe this cup is nothing special, but I want to use it forever," he smiled.

Kintsugi inscribes an object's story into its body: the moment of the breakage, the fact that it was loved enough to be repaired, that it is likely to be handled with care in the future. All of this is written into the veins of gold and lacquer for those who care to look.

A kintsugi-repaired artifact is what it is because of -- not in spite of -- its fissures. And it is this that takes the art beyond the technicalities of ceramic repair, lending it the metaphorical power to describe the human condition. We have all been broken at some point. And the essence of who we are is not located in some flawless image we might present, but along the fault lines of our biographies. Kintsugi encourages us to embrace our past along with its scars, to realize that our cracks make us even more beautiful.