A Yangon art festival points to the city's past -- and future

'My Yangon, My Home' encourages people to think about the look of their town YANGON It is almost impossible to walk through the streets of downtown Yangon without having one's aesthetic sensibilities stirred, at least a little.

Many grand colonial buildings are crumbling relics of their former glory, and the golden glow of the Buddhist pagodas is sometimes obscured by smog amid worsening traffic problems in Myanmar's largest city. But despite the chaos and poverty caused by years of military-imposed isolation, beauty, in its various guises, shines through.

A recent walking tour of galleries in central Yangon -- part of this year's "My Yangon My Home" festival that ran through mid-March -- was, according to organizers, aimed at drawing attention to the former capital's burgeoning art scene and encouraging residents to think about the look of their rapidly developing urban environment. A visitor looks at works by Pe Nyunt Way at the Lokanat Gallery. (Photo by Fiona MacGregor)

Negotiating Myanmar's complex bureaucracy has not been a simple task, those behind the festival say, but the event's aim is to encourage the kind of civic engagement that was long suppressed under the former junta. Art and politics have strong links in Myanmar: Several of the country's leading artists are former political prisoners who found visual ways to express their beliefs during the long years when free speech was off-limits.

Internationally acclaimed artist Htein Lin, one of the festival's co-curators, is among them. "There is a huge gap between gallery space and public space," he said at the River Gallery, one of the venues participating in the event, which also features a series of art installations in public spaces across the city.

"Normal people cannot come to gallery spaces. How can we imagine they can come here?" he said. The problem is not simply psychological -- that certain spaces can be intimidating to those unused to formal art settings -- but also practical. "People have no time. They are busy just living. So many people live outside the city and only come in to work," he pointed out. A visitor catches a glimpse of the past at Pansodan Scene gallery. (Photo by Fiona MacGregor)

One of the challenges for the artists involved was coming up with works suitable for displaying in public spaces, Htein Lin said. Some of the innovations included "visual poems" on a footbridge -- which is also aimed at getting people to use the bridge rather than risk a dangerous dash across a busy road. Others include a giant, colorful duck placed at a hospital to cheer patients and families, an installation based on children's dream homes and even one inspired by the overenthusiastic use of loudspeakers in the city.

But organizers also wanted to encourage people to enter the city's many galleries. Some artworks, however impressive, are not suitable for general display in public spaces, said Htein Lin, pointing to a gold-painted sculpture of naked men by Myanmar artist Aung Ko. With its lifelike semblance it is a remarkable piece of art, but one which breaches a number of cultural taboos. Other artworks are less controversial, but too fragile or impractical to display outside.

MAPS AND STAMPS This is the second year of the festival, and the organizers want people in Yangon to think about what kind of art they want, what sort of public spaces, and what kind of city they want to see develop over the coming years. "Now people share photos [of the festival art] on Facebook and start to discuss and argue on social media about it," Htein Lin said.

Galleries on the walking tour helped produce a map to guide locals and visitors around 19 art exhibitions and galleries in a single day. Those who collect at least 10 galleries' stamps on their maps can win prizes. And if one or two gallery owners looked a little overwhelmed by the enthusiasm of visitors for collecting the stamps, they acknowledged it was a successful lure for people who would not normally visit. Don Wright sits between sculptures at the Wired on 39 gallery. (Photo by Fiona MacGregor)

"We've had a lot more people than on a normal Saturday," said Don Wright, a Myanmar-based Scottish artist who opened Wired on 39, a contemporary art gallery, last August. He said a number of people had come in, sought their stamps, and left almost immediately, but others had taken a real interest. As he talked, several groups of local and foreign gallery visitors were admiring the wire sculptures on display.

Among them was Stephen Weedon, who is in Yangon on an internship. "They should get more tourists to do this. It's a great way to see downtown," he said.

He had a point. The artworks featured on the tour illustrate the diversity of Yangon's art scene, but many of the galleries are themselves housed in buildings that capture the city's architectural and cultural intrigue.

Climbing the wooden stairs to the Lokanat Gallery, on Pansodan Street, visitors on the tour passed a dusty confusion of ancient electrical wiring in a corner, alongside boxes of sweet-scented soaps and malodorous fish-based snacks -- presumably stored there by the street vendors outside. Beyond lay a light and expansive gallery space, exhibiting works by artist Pe Nyunt Way.

His work, inspired by 19th-century rubbing-on-canvas art, hung above intricate tiles, and was lit by stately windows that recalled the building's colonial-era birth. It was once one of the city's most prestigious business addresses -- the creation of a Jewish trader from Baghdad, and a reminder of the city's diverse cultural and ethnic heritage. 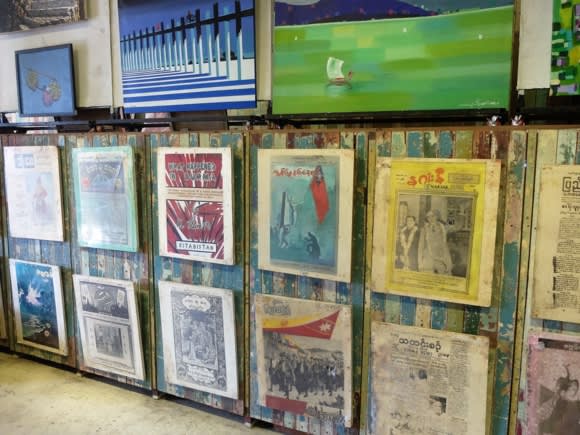 Pansodan Scene, a short walk away, is no longer in daily use as a gallery but was opened for the occasion by its founder, artist Aung Soe Min, allowing visitors a glimpse of evocative and colorful posters. Some advertise a long-vanished world of imperial commercial ambition, shining a rare light on the city's re-emerging openness to international companies.

Yet if evidence of Yangon's history was abundant on the tour, one of the final locations was a display of visions firmly based in the present.

Myanmar Deitta, one of the country's few dedicated photographic galleries, was hosting the finalists of the festival's photography competition. Open to anyone -- local, foreign, professional photographers and complete beginners -- the competition required entrants to submit three photographs on this year's festival theme: "Memories, Objects and Spaces."

"One thing I noticed a lot, compared to 2015, is [that] people are representing Yangon in a much more modern way," said Matt Grace, the gallery's founder. "The photos are of new buildings, [or] long exposures of moving traffic, built up with man-made light. In 2015 there were more dilapidated, heritage buildings." The backgrounds of the entrants have also changed, Grace added. "This year, it was 80-85% local photographers. That's a big difference from 2015."

Myanmar is, in some ways, changing rapidly under civilian rule, and as the economy opens to outside influences. Home, as the festival's theme recognizes, is a place of memories, but as the objects and spaces it contains evolve, it also becomes a place of dreams and ambitions.

As Yangon's art and architecture begin to reflect that shift, its galleries -- old and new -- offer a fascinating and inspiring insight into a city negotiating its way between conserving traditions and opening up to a new world of modernity.