Decades after the conflict, acceptance and reconciliation DANANG, Vietnam -- The first U.S. combat troops landed in Vietnam 50 years ago on the morning of March 8. The 2,000-plus members of the 9th Marine Expeditionary Brigade were tasked with defending the military airport about six kilometers inland. Nguyen Tien, 73, who was with the Viet Cong forces at the time, says it took the Americans almost the entire day to bring their forces ashore.

He should know. "I was assigned to monitor the Americans' arrival and their activities in Danang in 1965," he told Nikkei Asian Review. "One group headed for Danang airport in their vehicles. Another group left the beach for a Hawk missile post in Phuoc Tuong. And the other group crossed Highway One to reach Bau Mat."

Nguyen had been with the Viet Cong -- the southern resistance forces -- for more than five years by then. His father had fought, too, but many years earlier against the French occupiers. Nguyen remembers that the U.S. Marines who arrived that March morning were heavily armed and laden with equipment, sweating profusely in the tropical heat. He knew their arrival was a bad sign.

"When I saw the Americans arrive, I knew the war was about to get harder, more ferocious," he recalled. "And I knew it was going to go on for a lot longer. A lot more people were going to die. And if we weren't very determined, we weren't going to win."

The number of U.S. servicemen in Vietnam would grow to over 500,000. In the end, that was not enough. Forty years ago this week, North Vietnamese tanks rolled into Saigon, bringing an end to the Vietnam War, referred to domestically as the  "American War." More than 57,000 Americans died fighting that war and millions more Vietnamese perished, on both sides.

With reunification came peace and -- gradually -- better relations between the authoritarian communist state and the U.S. There are now closer economic ties and -- increasingly -- closer military ties, as both countries try to contain perceived threats posed by China's territorial claims in the South China Sea.

Here in Danang, any conflict seems reasonably remote. The beach goes on for many kilometers; the city is bustling with traffic and new construction; the economy here is more active than in much of the country where growth has stalled in recent years. Danang is now a popular beach destination with five-star seafront hotels that stretch south to the well-preserved town of Hoi An. Larry Vetter, former U.S. Marine, in 2015 holding a photo of himself from 1969. (Photo by Michael Sullivan)

Larry Vetter came ashore in Danang as a Marine in 1965. Fresh out of Texas A&M University, knowing nothing about Vietnam, he was simply determined to "defend America." He remembered vividly the day his unit landed.

"I was very excited. I can remember specifically wanting to take off my brown second lieutenant bars, didn't want to show I was an officer, didn't want to carry a pistol. I wanted a rifle, wanted to go, I was ready to fight communists."

Vetter did three tours -- two and a half years -- first in an engineering battalion, then leading long-range reconnaissance patrols in the mountains west of Danang, and finally as an infantry captain.

But as the war progressed, Vetter's thinking changed. He had an epiphany of sorts on a mission 50km south of Danang in 1969 when his unit discovered a network of Viet Cong bunkers and started pulling out prisoners -- including a woman, nine months pregnant.

"I pulled her out and sat on the beach holding her hand, trying to talk with her, telling her things would be okay which was bullshit, called a helicopter to get her out because she was going into labor, but she laid on the beach focusing her eyes on my eyes, pouring her soul into me, all her fear, hatred, all the anger that she had ... she didn't say a sound, but her eyes screamed and embedded her soul in me."

By putting her on the helicopter -- instead of with the rest of the prisoners -- Vetter had made a choice.

"I did not label her as Viet Cong. The other prisoners were going to HQ [headquarters] down the beach and they had South Vietnamese interrogators. This one I helicoptered off and did not say anything about her being Viet Cong, said pregnant woman, get her to a hospital, so went in without any stigma of being Viet Cong."

That decision may have helped save the woman's life -- and that of her baby. Vetter did not lie; he simply did not tell the whole truth. And he is fine with that. He now lives in Danang after his wife in the U.S. passed away - helping, he says, to repair the damage the U.S. caused here, particularly to combat the effects of the defoliant Agent Orange which are still felt today.

The airport in Danang is among a handful of so called "hot spots" that the U.S. government is helping to clean up. But Vetter and many others believe it is not nearly enough. So he volunteers and provides financial assistance to a family he has informally adopted. He also writes books and hosts the occasional barbeque -- like one such event in early April, where old foes meet to drink and talk. "We had five former VC soldiers and a bunch of old [U.S.] Marines who live here. It was great fun. I talked to one of them, told him where I was in recon, in what patrols, what year, and he looked at me and said, 'I think I was following you'." 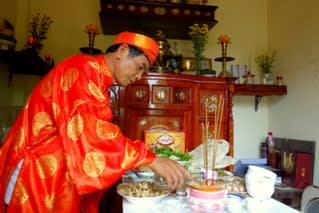 Vo Cao Loi, a survivor of the My Lai 2 massacre, at family altar on the anniversary of his mother's death. (Photo by Michael Sullivan)

In a small house about five minutes from Vetter's place, I met another former Viet Cong with a story to share -- but not with such a happy ending. Vo Cao Loi remembered another day in March -- in 1968 -- the day of the My Lai Massacre. He was not in My Lai but the hamlet next door, the one that no one talked about, the one the Americans called My Lai 2.

"There was a lot of shelling that day," he said. "My mother thought there was going to be a big deployment. So she said to me 'run, you can't stay with me. You're already 16 and if they catch you, they'll take you away ... or worse'."

She stuffed a small bag in his hand -- a few clothes and some rice -- and told him to come back after the Americans had left. He ran into the jungle and watched the helicopters land. A short time later, he heard the sound of grenades.

"There were only women and children left when the Americans landed. All the men had run away. The villagers were hiding in a few shelters, and the Americans just started throwing grenades inside. They didn't ask the people to come out. And anybody who came up, they shot."

He returned once the Americans left and found the dead everywhere, he said. In all, 97, including his mother lying outside the shelter, shot in the head. When he went inside, he saw his sister-in-law, holding her baby. She was also dead. No one was ever held accountable for what happened in his village. In the aftermath, Lt. William Calley was the only officer to be convicted for his role in the My Lai massacre.

"We have to move on"

The day I visited happened to be the 47th anniversary of Vo's mother's death, which the family marked with a small ceremony at the family altar and a meal afterwards. He was a gracious host, with a quick smile and an easy manner. I said I found his hospitality touching, given the circumstances. If it were me, I told him, I would still be angry. He grew serious. U.S. Navy sailors play a free concert on the beach in Danang where U.S. forces first landed 50 years ago in March. (Photo by Michael Sullivan)

"Time makes human pain fade. If we stick to the pain we couldn't live, we couldn't move on. And we have to move on. We have to accept what happened and let it go," and then tears welled up as he was momentarily overcome. I cut the interview short, not wishing to cause any more pain. Soon we ate lunch, with some former Viet Cong and their families, drinking and laughing as they remembered tricks they used to pull on the Americans.

That evening, there was a concert on the beach where the Marines landed 50 years ago. The band -- from the USS Fort Worth -- one of the U.S. Navy's newest -- and most advanced warships in Danang on a goodwill visit. The young, selfie-snapping Vietnamese audience knew the lyrics to almost all the songs. Some even sang along. But most knew almost nothing firsthand about the war. Like three quarters of the population, they were born after it ended and saw the Americans as friends, even a potential ally in Vietnam's ongoing conflict with China over the South China Sea. Some of the sailors said they were surprised by just how friendly the Vietnamese were, given the history. But here on the beach, it all seemed so long ago. The beach was beautiful and everyone was having a good time. Why not move on?