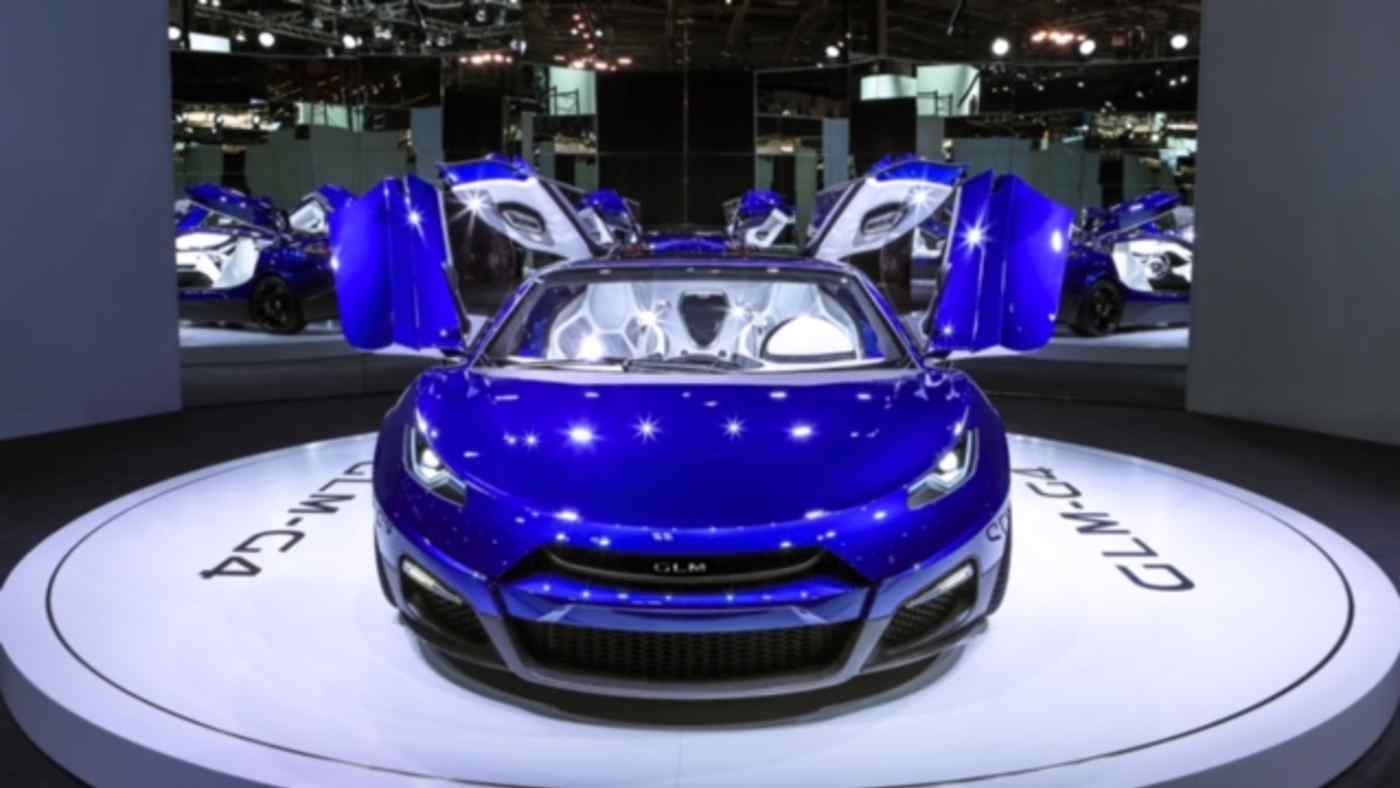 PARIS -- Asian carmakers are staging their biggest showing yet at the biennial Paris Motor Show, the world's oldest and largest car fair, which opened Oct. 1.

With the focus on electric vehicles, models and concept vehicles in this category are being introduced by Toyota Motor, Mitsubishi Motors, Hyundai Motor, Kia Motors, Honda Motor, Lexus and Suzuki Motor among others.

Toyota is showing its FCV Plus hydrogen-fuel concept car, first seen at the Tokyo motor show last year, and its new small crossover, the C-HR. But it is the world debut of Japan's exotic and extravagant electric supercar, the GLM G4, that could grab the spotlight from a plethora of EVs by start-ups and established international automakers during the 16-day show.

Kyoto-based GLM collaborated with Dutch design house Savage Rivale to create the four-seater G4, which has the looks and performance to suggest it could be Japan's answer to the U.S.-built Tesla -- the standard bearer for electric vehicles globally.

The G4's twin electric motors power it to 100 km/h in 3.7 seconds and deliver a top speed of 250 km/h, according to the company, while it has a range of 400 km before it needs to be recharged.

More than 1.2 million visitors are expected to visit the show until Oct. 16 at the massive Porte de Versailles exhibition center in the city's leafy 15th arrondissement. Many will head to Pavilion 3 for the chance to test drive an electric or hybrid car, while others will go to Pavilion 1 for the motorsports display, which includes Formula 1, rally, autocross, drifting, karting and hill-climb vehicles.

A record 230 brands, up 30% from the last Paris show in 2014, from 19 countries are offering an eclectic range of the world's most interesting vehicles, from tiny two-seater "city cars" and dune buggies to luxury limousines from Mercedes-Benz and ultra-expensive sports cars from Ferrari, Porsche and Maserati.

A few big names are absent. Rolls-Royce, Lamborghini, Aston Martin, Volvo and Ford plan to spend their marketing budgets in other ways. But this remains the biggest Paris motor show yet.

European leaders Volkswagen and Daimler are showing off their electric car concepts to compete with Tesla. Daimler CEO Dieter Zetsche, clad in jeans and sneakers, declared the "the emission-free automobile is the future" as he launched the company's new Mercedes-Benz "EQ concept" EV vehicle.

Volkswagen chairman Herbert Diess, fighting to restore the German group's reputation after its diesel engine emissions scandal last year, stood beneath a sign declaring "Our future is electric." He said VW would have "an entire family of electric vehicles" on the market by 2020, emphasizing his view that the sector is about to take off.

Indeed, the roll-call of Asian, American and European cars at the show offering hybrid or battery EV engine options reinforces the message that the world is on the cusp of an EV revolution. According to the International Energy Agency, the number of battery and plug-in hybrid EVs in use globally soared past 1 million in 2015, and the category is showing the highest growth rate for all vehicle types.

While the electric vehicle is one dominant theme at the show, another is the "connected" electronic car, which is filled with digital devices that transform the car into an office or home entertainment center on wheels.

But diesel vehicles are far from dead in Europe, despite the VW scandal. Renault-Nissan chief executive Carlos Ghosn, launching the fifth-generation Nissan Micra in Paris, said it "raised expectations" for what a hatchback could deliver to customers. The new Micra, to be built in a French factory, will have diesel or petrol engines. But critics on social media bemoaned the lack of an electric option for the new car since Nissan already builds the world's best-selling electric car, the Leaf.

Despite the strong Asian presence at the Paris show, the most conspicuous absence is China, which has the world's biggest EV market. Chinese makers have long had their eyes on Europe, the second largest car market after China, and some brands such as Great Wall Motor, Geely Automobile Holdings and Chang'an are sold there. But Europe's ultra-tough emissions and safety standards rule out many Chinese models.

Germany, Japan and the U.S. dominate global car exports, accounting for about 44% of the total global value of $673 billion in 2015, according to the Paris-based International Organization of Motor Vehicle Manufacturers (OICA). Chinese exports numbered only 728,000 vehicles in 2015, accounting for only 0.6% of global export market by value.

Otherwise, China is the giant of the global car industry, being the world's leading producer, consumer and auto investment destination. According to the OICA, China produced 24.5 million passenger cars and light commercial vehicles in 2015 out of a world total of 90.78 million units and had domestic sales of 24.6 million in that year.

China also leads in EV sales and production, with the China Association of Automobile Manufacturers reporting in August that EV volumes were running at more than double last year's rate. In the first seven months of 2016, the association said, Chinese EV sales were 207,000 units, with 153,000 being battery models and 54,000 plug-in hybrid EVs. That sounds substantial, but still represents less than 2% of total Chinese sales.

Still, the EV market is set to take off in the next few years, with a study by Bloomberg New Energy Finance earlier this year predicting that as battery prices fall and driving range expands, the EV share of new vehicle sales globally will rise to 10% in the next decade, then 20% by 2030 and 35% by 2040.

A host of new players have entered the Chinese EV industry in recent years. Yet while China has EV technology and cutting-edge auto design studios, its brands lack international cachet and its profile remains low in Europe. Eight Chinese manufacturers are among the world's top 25 producers, but none of their brands are at the Paris show. Even Volvo, which was bought by Chinese maker Geely for $1.5 billion in 2010, does not have a stand. Instead, China used the Beijing Auto Show in April this year to highlight its range of domestic new models.

Among other Asian offerings at the show, Lexus is introducing its UX concept for a luxury compact sport utility vehicle, while Mitsubishi Motors is unveiling its own concept for a high-end SUV, known as the GT-PHEV (plug-in electric vehicle), and a smaller crossover SUV designated the eX Concept.

South Korean maker Hyundai is showing its third-generation i30, the global car it hopes will win sales in Europe from the VW Golf and Ford Fiesta and Focus. Likewise, Honda is unveiling the European version of its new Civic hatchback.

The Toyota Corolla remained the world's top selling car in the first half of 2016, according to the Rome-based automotive consultancy Focus2Move. It was followed by the VW Golf and the Ford F-Series light truck, which is consistently the top seller in the U.S. market. The Ford Focus and the Hyundai Elantra were ranked fourth and fifth globally. China's favorite vehicle remains the Wuling Hong Guang, a minivan that is also sold in India as the Chevy Enjoy. In the Japanese market, the top seller is the Toyota Prius/Aqua hybrid range. Most Chinese car exports currently go to low-cost markets in South America, Africa, the Middle East and Eastern Europe, although they are gradually expanding into more advanced markets in Europe, Asia and Australia. If China follows the same "quality, value and innovation" path pioneered by Japanese and South Korean makers in previous decades, and if it achieves leadership in EV manufacturing, that mix is likely to change in coming years as quality improves and production increases, with Chinese names such as Haval, Brilliance, MG, BYD and JMC becoming better known abroad.

SAIC is China's biggest carmaker with sales of 625,000 units in the first quarter of 2016, according to British auto consultancy JATO Dynamics. That makes it the 11th largest among the top 25 carmakers by sales volume. Chang'an, Geely, Dongfeng and Great Wall are ranked 14th, 16th, 17th and 18th, with Beijing Auto, FAW and JAC also in the top 25.

The Paris Motor Show is primarily aimed at showing off Europe's automotive industry. But with the ever-shifting trends in global sales and production, EV cars such as the GLM G4, the result of Japanese-Dutch collaboration, may point the way to the future.