AMMAN -- As the sun set over the Prince Mohammad International Stadium in Zarqa, in the arid northwest of Jordan, Prince Ali bin Hussein climbed into the pilot seat of his Blackhawk helicopter for the ride back to Amman. It is not, he said, how he typically travels, but it has been a busy week and he is in a hurry. The prince, who has spent years in the upper echelons of world soccer, heads the Jordanian Football Association and is overseeing his country's hosting of the FIFA Under-17 Women's World Cup; a major undertaking for a small country in the middle of a turbulent region. 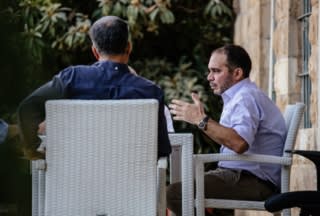 Prince Ali bin Hussein of Jordan, in conversation in Amman

Earlier that evening, he watched as the Jordanian team was overpowered by a more robust New Zealand side, cementing its early exit from the tournament -- although the loss barely seemed to dampen the spirits of the spectators. Throughout the match, the partisan crowd had chanted over and over: "Prince Ali, give us a wave," a request he complied with, albeit slightly nervously. His fear, he said afterwards, was that he would stand up at the exact moment the opposition scored.

By hosting a women's tournament, and doing so with great fanfare, Jordan is making a statement to the world that it is different from its troubled neighbors, Syria and Iraq.

"It is to show that we are a normal country that has the same values as the rest of the world," the prince said. More than that, he explained, it is a demonstration that top-level football -- tarnished as it has been by corruption scandals and bloated by money -- can still be a unifying force in tumultuous times.

"Football is the common language of the world," he said. "It transcends all barriers, and we need to utilize it as best as possible."

The prince, brother of the current king of Jordan, is well-versed in the cronyism and self-interest that have often infected professional soccer. As vice president of the sport's governing body, FIFA, between 2011 and 2015, representing Asia, he campaigned for transparency and reform within the organization. He took the unprecedented step of running against the incumbent president of FIFA, Sepp Blatter, in May 2015, after several officials were arrested on graft charges. Blatter resigned weeks after winning as the corruption scandal blew up, and Ali ran again, promising to clean up the game.

He lost the election, and since then has made no secret that he feels the organization has chosen continuity over reform, and shows few signs that it is prepared to change its ways.

"You have to clean up, and if you don't, the people at the top level have to be held accountable," he said.

Despite his frustration with the organization, he has left a mark on the global game. It was Prince Ali who headed a campaign to end the exclusion from FIFA events of women wearing headscarves -- a ban that had prevented players from conservative Muslim backgrounds from participating in World Cup qualifiers. That was "a hard fight," he admitted. The Jordanians faced opposition from various quarters, from conservative governments in the Middle East, to European associations who claimed it could encourage the repression of women. At one point, FIFA even insisted the ban was for health and safety reasons.

"Sometimes in the West, they don't understand that those people who have an extremist mentality, they don't want women doing sport anyway," he said. "This is actually getting [female players] to be accepted, and it's a step in the right direction. You prevent an excuse for having any sort of repression happening. There were some, obviously, in our region, who were not happy with it. But that's their problem... in the end, commonsense prevailed and people are now allowed to play the sport that they want." Samar Nassar, CEO of the local organizing committee for the Under-17 Women's World Cup

Removing the ban could have a profound effect on the women's game in the Middle East and Asia. As Samar Nassar, a two-time Olympic swimmer who now heads the local organizing committee for the tournament, said: "It was a barrier for so many women in the region... It's giving them an opportunity to practice the sport."

Although Jordan's hosting of the tournament is in part designed to showcase the country to the rest of the world, the main audience is domestic, the prince said.

Sport, he believes, is a way to promote cohesion in a society that faces major challenges, due mostly to turmoil in neighboring countries. Trade has withered due to the conflicts in Syria and Iraq, and more than 1.5 million Syrians have fled across the border into Jordan. The Zaatari camp, a sprawling town of shipping container houses and high fences -- home to 70,000 refugees and an emblem of the forced migration crisis -- is a short drive from the stadium in Zarqa.

On the edge of the camp, two dust-blown football pitches overlook the barren desert beyond. A machine-gun topped armored vehicle lurks under a shelter just by the fence. On both pitches -- girls on one, boys on the other -- coaches run dribbling and passing drills. The project, organized by the Asian Football Development Project's Carine N'koue and marshaled by local coach Alaa Al-Deen Al-Wadi, who was a judo instructor and physical education teacher before he fled Syria, offers free training sessions to 5,000 boys and girls from the camp every week. The 40 coaches were recruited from within the camp and trained by an international specialist.

When they began three years ago, N'koue said, they struggled to get women to sign up to the coaching program and even the office of the United Nations High Commissioner for Refugees told her it was a waste of energy to try. Now however there are 20 women coaches putting the girls through their paces. Attitudes, she said, are changing, and the camp's residents feel a real sense of ownership over the program. The AFDP was started by Prince Ali in response to what he perceived as an absence of social responsibility in the game in the Asian region, which he represented in FIFA. Among other projects, the organization has worked with girls who were victims of human trafficking in Cambodia, provided training to underprivileged children in India, and helped to establish girls' leagues in Malaysia and Palestine. "You can do a lot with a little if you do it right," the prince noted.

This grassroots approach seems a stark contrast to the vast sums of money flowing through the game, and the commercial imperative that drives its growth. At the moment, Prince Ali is angry that FIFA sets the ticket prices for its tournaments. "We have in Jordan tickets that are being sold at $70, when you have an average [monthly] income of $400 per family... That's the rules. It's a bit difficult, and sometimes it doesn't make much sense."

Likewise, the organization's grip on the broadcast rights for its tournaments means that the opening ceremony for the Under-17 Women's World Cup could not be broadcast on Jordanian national television.

The focus, said Prince Ali, is on the big money-makers -- the men's World Cup and the richest leagues in Europe -- often to the detriment of the grassroots, where the potential for social impact is highest.

Asian and Middle Eastern money has flowed in huge quantities toward the major European leagues, but not enough is trickling back, he added.

"All their focus is on outside, whether it's buying clubs, or buying rights to the [English] Premier League... or bringing teams over. But the amount of investment going into football in our own countries is minimal compared to that," he said. "It is a global game, we have to recognize that. You can't tell people not to invest one way or the other. But if we can make it a real fair, global sport, then it's our responsibility also within our own regions to promote it for what it is, and to have fairer rules that make it acceptable to all."