BANGKOK -- Sit down at the Tampa Coffee Shop at the Florida Hotel in Bangkok and the first thing you will get is a free glass of water. It is a suitably old-fashioned gesture.

The coffee shop opened on the ground floor of the hotel in 1968, offering what the menu describes as "delicious international cuisine and a comfortable atmosphere." It adds: "As you know, today a number of our fine food becomes the city renowned food selections." 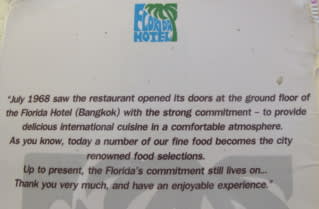 The reference is to the city of Tampa in the far away U.S. state of Florida, the inspiration for dishes such as the cafe's famed barbecue spare ribs. Both the name and the date locate the coffee shop firmly in a bygone era: The twilight zone of Bangkok's GI-era hotels -- fast-disappearing relics of the Thai capital's Vietnam War hospitality industry.

Bangkok enjoyed a hotel boom in the mid-1960s, catering to the sudden influx of thousands of American and Australian armed forces personnel from neighboring Vietnam, where they were stationed in the 1960s and early 1970s in a war that ended in defeat for the U.S. and its South Vietnamese allies. During the war enlisted men were entitled to rest and recreation tours, usually in the capitals of neighboring Southeast Asian countries. 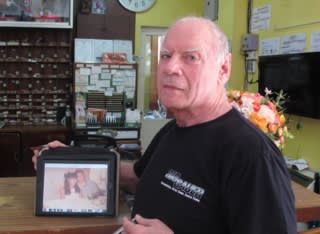 Christopher Holmes, former Australian GI, with a photo taken at the Miami Hotel in 1968 on his military rest and recreation in Bangkok (Photo by Peter Janssen)

"The first time I came here was in 1968," said Christopher Holmes, 69. "I was with the Australian Army in Vietnam and we got five days off on our 13-month tour of duty. You could either go to Singapore, Sydney, Hawaii, Taiwan or Bangkok. That was my first trip to Bangkok."

When Holmes arrived at Bangkok's Don Mueang Airport he and the other vacationing soldiers were put in a big room to choose which hotels they would stay in. Officers chose first and the enlisted men got the leftovers, choosing in alphabetical surname order. "By the time it got down to the Hs I walked over to a board that had all the hotels listed and I looked down the list and I saw Miami, and I liked the name, so I grabbed the card and they bussed us around to all the hotels," Holmes recalled. So began a love affair that would last for decades.

The young Holmes arrived at the Miami, rented a Mercedes taxi for $10 a day and immediately hit one of the 2,000 bars (a contemporaneous U.S. Army estimate) in Bangkok, mostly along New Phetchaburi Road. "I can't remember the name of the bar I went to but it was absolutely huge," Holmes said. "I'd never seen anything like it. And those girls. I picked one out; I've still got her photograph. The photograph was taken at the Miami."

The young woman took him home to meet her parents, and her mother washed his clothes for him. Holmes, who set up his own security service business in Australia after the war, still ranks his R&R in Bangkok as his best vacation. "Absolutely. I still tell people about it although it was 50 years ago." Miami Hotel has hardly changed since it opened in 1962. (Photo by Peter Janssen)

Holmes returned long after the war ended to stay at the Miami Hotel in 2000, and is now a regular visitor in semi-retirement. "It's still exactly the same, except maybe for a coat of paint," he said. "And the good thing about the Miami is the toilets work. The other thing I love about it is that the staff are so honest. Every other hotel I've stayed in [in Bangkok] I've had my bag gone through by the staff. I don't trust people, so I set it up in such a way that I know when people have been in my bag."

The Miami, which opened in 1965, has been run by the Tansirichaiya family for the past six decades. The family was originally in the rickshaw business, owning a fleet of 1,000 peddled taxis. After Field Marshal Thanom Kittikachorn outlawed rickshaws in the capital in the early 1960s the family moved into the vehicle taxi business.

"Thereafter we had 1,000 taxis for rent, and the taxi drivers would say to my grandmother, 'why don't you get in to the hotel business? We will send customers to you,'" said Suphol Tansirichaiya, the Miami's third generation general manager. Amid worries that the military would decide to close down their taxi business the family invested in a small plot of land on Sukhumvit Road and built the Miami, naming it after a city in Florida where a Thai woman had won a Miss Universe beauty contest that year. It opened just in time for the influx of foreign soldiers on R&R.

The Miami Hotel was one of a score of Bangkok hotels that would end up servicing the R&R trade. Others included the Embassy, Federal, Florida, Grace, Honey, Liberty Gardens, Manhattan, Morokot, Prince, Rex and Swan. These hotels all followed a similar model -- cheap, clean, with air-conditioning, a swimming pool and a coffee shop -- and for good reason. Most were built to meet the specifications of a former Thai air chief marshal, known to be the man behind Tommy's Tours, a travel company set up to handle the R&R business.

The powerful marshal reportedly encouraged his Thai-Chinese business friends to invest in the hotels to cater to the soldiers. "All hotels had to be $5 a night, have a swimming pool, 24-hour room service and, be, er, 'guest friendly'," said Alan Dawson, a Bangkok-based Canadian-born journalist who covered the Vietnam War for UPI after serving as a soldier. Hoteliers of that era confirmed that they had to pay Tommy's Tours a percentage of their profits from the R&R trade. After the war ended, many of these hotels catered to European tourists, who replaced the soldiers, according to Luzi Matzig, current chairman of Asian Trails Group, a Thai company, and a long-time veteran of Thailand's tour business. But as mass tourism took off in the mid-1980s, eventually turning into Thailand's single largest foreign exchange earner, the GI-era establishments have faced stiffer competition.

Many similar hotels, including the Federal, Liberty, Morokot, Prince and Rex have closed down within the past decade, selling out to condominium projects or new hotels. Keeping going is a challenge, especially for family-run establishments that do not have another core business.

"I have to keep these properties going because the owners love this land. They love the business," said Supisith Visaruthamrongkul, manager and son-in-law of the founders of the Swan Hotel. The family also owns the Swan Lake Hotel in Sattahip, opened in 1968 to cater to U.S. Air Force personnel working at U-Tapao Airport, built by the U.S. military to assist in the bombing of Indochina.

"But in fact, they don't benefit from the hotel," said Supisith of the now octogenarian owners. "For two years already I've had to put my own money in to keep it going. It's tough." The Swan appeals to European tourists, especially from France, who are drawn by the low prices and historical charm. Chinese tourists, who accounted for about 30% of the 16.6 million foreign tourists who visited Thailand in the first six months of 2016, do not generally like old hotels. "They ask, 'Why is your hotel so old? Why is there no lift?'" Supisith said.

A place to sleep The GI-era hotels, where prices ranges between 1,000 baht ($28.85) and 1,500 baht, are in the budget bracket, the most competitive segment of the hospitality market in Bangkok, which is getting tougher each year as tourism trends move down-market. "The main reason investments today have concentrated on three star or budget hotels is because the consumer behavior is changing," said Supawan Tanomkieatipume, president of the Thai Hotels Association.

"In the past, tourists would look for hotels with facilities. It meant that hotels would have swimming pools, gardens, restaurants, because guests came for leisure, relaxation. But nowadays people are just looking for a place to sleep."

The association estimates there are now about 370 to 400 licensed hotels in Bangkok, offering 74,000 rooms, compared with an estimated 53,000 rooms in Singapore. There are another 1,200 unlicensed hotels, with a further 56,000 rooms, all in the budget bracket, Supawan estimated. The unlicensed establishments avoid registration in order to avoid taxes and building ordinances, such as safety requirements on fire escapes.

Some GI-era hotels, such as the Reno, are surviving and even thriving because they still offer leisure facilities, along with good locations and a personal touch at budget prices.

"Nowadays there are many three-star hotels around here like Holiday Inn Express and Ibis," said Tunyanun Leenutaphong, owner of the Reno, which is near the National Stadium Skytrain station. "Our clients are mostly from Europe. They say they like it here because we treat them like family. The pool is also very popular. In this area no other budget hotel offers a pool," she said. 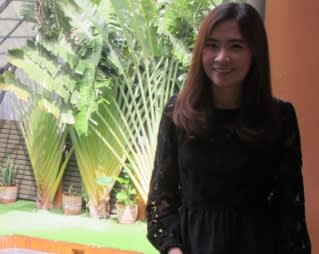 The Leenutaphong family bought the Reno from the original owners in 1994. The hotel was built in 1963 but has undergone several renovations, giving a modern look to the lobby and restaurant, which is popular among Thais.

In general, however, keeping an old hotel going on low revenues is a challenge, especially in the light of dramatic rises in Bangkok land prices over the past six decades, which have tempted the new generation of owners to sell to property developers.

"My father inherited the hotel and he told me not to sell, only to expand," said Miami's manager Suphol. While dedicated to keeping the Miami going as a "retro hotel," he admitted it might get tougher if land taxes rise because competition makes it hard to raise room rates. And the temptation to sell is persistent.

"People come to ask to buy the property every week, either for a hotel or condominium or even just to jointly manage it," said Suphol, who manages the Miami with the assistance of his wife.

It does not help that few Thai people are interested in historical buildings, especially in relation to the Vietnam War era and its R&R tours, which some think might be better forgotten.

"I think more and more 'older' hotels will be knocked down except a unique few, and this is not true just for Bangkok but also for most destinations in the world, except in a few cities where building permit is so difficult or new buildings are not allowed, such as central Paris or Munich," said Chanin Donavani, former chairman of the Dusit Hotel Group.

"Times change, customers change, and almost everything changes, so hotels that were built 30 or 40 years ago cannot really survive."