TOKYO -- China looks set to see more of the capital outflow plaguing its economy over the coming months. Earlier this month, the U.S. Federal Reserve suggested it could implement additional rate hikes next year, increasing the likelihood of more money draining overseas. Come January, Beijing will also have to deal with the administration of Donald Trump, and all the uncertainty it will bring.

As shown in the first graph, China expanded its foreign reserves by $739.6 billion between early 2012 through the peak in June 2014. Before even taking office in March 2013, President Xi Jinping held considerable power.

On the other hand, China's holdings of Treasurys increased by $102.2 billion during the same period. The gap indicates some $600 billion was spent on buying other foreign-denominated assets. In reality, Beijing's Treasurys ownership could even be larger if it were calculated to include holdings registered under the names of clearing houses, such as Belgium-based Euroclear. Such securities are instead included in the holdings of the Belgian government, for example. 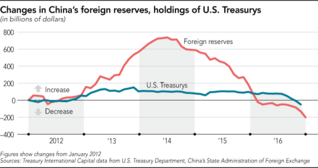 Even taking indirect ownership into account, Beijing was not keen on buying Treasurys while it was rapidly expanding foreign reserves. In doing so, Xi may have been seeking to deteriorate the base of the dollar -- the world's key currency. For the Chinese President, his U.S. counterpart Barack Obama was a fairly straightforward partner to deal with.

However, the circumstances surrounding foreign reserves suddenly changed in the latter half of 2014. While China's current account remained in the black, capital outflow accelerated at a speed that more than offset the current account surplus. Since then, China's foreign currency reserves have continued to fall. In early 2016, the amount fell below the level of early 2012.

However, later this year, China was no longer be able to maintain its Treasurys ownership at previous levels -- its pool of foreign currencies shrank at a faster speed.

As of the end of November, China's foreign reserves had fallen to almost $3 trillion, a drop of nearly $1 trillion from June 2014. Through July to November, the decrease amounted to $150 billion.

Between July and October, however, China's net selling of U.S. Treasurys totaled a similar amount of more than $120 billion. It appears the Chinese leadership was moved to sell Treasurys in order to buy yuan.

The move implies that outflow of private money from China has had a serious effect on the economy, particularly in financial markets. One of the recent victims is the country's plunging bond prices. Yields of 10-year Chinese government bonds stood at the mid-2% range in September. In just three months, the rate has jumped to the mid-3% band.

Falling bond prices mean higher fund-raising costs for corporations. In addition, surging long-term interest rates have helped reveal fraudulent bond-market transactions that had been made during its bullish period.

Excessive corporate debts are another concern. Some companies leveraged unauthorized deals to fund bonds, but then suffered losses from a recent plunge in the bond market. The impact spread to involve counterparties as well.

Under the current circumstances, currency devaluation could prove key to boosting foreign demand. The yuan has in fact been falling against the dollar. But further depreciation of the currency could suck the country into a cycle of weak currency and capital outflow.

The monetary authority in China appears to be trying to at lease stabilize the currency using part of its foreign reserves. Donald Trump could also blame a weak yuan for widening the trade imbalance between the two countries.

How Beijing deals with the new leader in Washington and whether it can stabilize the economy remain lingering questions -- not to mention major risks for the global economy -- going into 2017.