TAIPEI Once known for cities filled with noisy scooters, Taiwan is making a name for itself as a cycling society.

In November, Taipei Mayor Ko Wen-je opened a newly installed stretch of Taipei's growing bicycle path network along pavements and dedicated tracks. The network now exceeds 300km, 112km of which runs alongside rivers and streams flowing through the city. A group of Taiwanese retirees take a moment to pose after reaching the top of a hill east of Taipei. (Photo by Chris Horton)

Early last year, the capital's claim to being Asia's leading bicycle city was bolstered by its hosting of the Velo-City global cycling conference -- only the second time the 36-year-old event organized by the European Cyclists' Federation had been held outside Europe or North America.

Ko, a doctor, participated in the conference and has emerged as one of Taiwan's most visible cycling advocates, promoting its health and environmental benefits. In February, at the age of 56, he cycled 520km from Taiwan's northern end to its southern tip in under 29 hours.

"I wanted to nurture a 'Just Do It' mentality in Taipei," Ko tweeted afterward. "So I started with myself."

The bicycle has become a part of life for a growing number of Taiwanese, who use it to commute, socialize or simply to stay in shape. In Taipei, bicycles are used for 5.1% of journeys, according to data from Taipei's transportation department -- well above the 2% transport share achieved in London under former Mayor Boris Johnson, now the U.K. foreign secretary, who is a vociferous champion of cycling in the city.

Introduced during Japanese rule in the 19th century, the bicycle was once a part of everyday life for Taiwanese, but it was gradually abandoned in favor of motorized vehicles -- in particular, cheap gasoline-powered scooters that can circumvent car and bus traffic, which began to be widely used in the 1980s. Today there are 14 million scooters in this country of 23.5 million people. The public bike service YouBike, backed by Giant, is popular for short rides in Taipei and other Taiwanese cities. (Photo by Chris Horton)

A major catalyst for the growth of cycling in Taiwan is a public-private partnership known as YouBike, a collaboration between Giant Manufacturing of Taiwan -- the world's largest bicycle manufacturer -- and Taipei's transportation department.

Launched in 2009 and now available in six cities, the initiative has close to 400 bike stations in Taipei alone. For cyclists, it is cheap -- or free, in some cities -- to use such bikes for the first 30 minutes. So far, the program has facilitated more than 73 million bike rentals.

Taipei transport department data shows that 43.1% of YouBike users who cycle for more than half an hour do so to commute to work or school, with 35.1% using the bikes for leisure and 15.1% for shopping.

INSPIRING MOVIE A surprise hit film called "Island Etude," released in 2006, also helped to inspire a national craze for cycling. In the film, a deaf university student cycles around Taiwan's coast with a backpack and a guitar and discovers interesting landscapes, customs and people.

Longtime Taipei resident Michael Fahey, who has been cycling here since 1991, said the film changed a generation of young Taiwanese. "It was dramatic -- like night and day," Fahey said. "There was suddenly a huge uptick of young people cycling Taipei's river paths, getting ready to huandao."

Huandao, a Mandarin phrase for touring round an island, has become a rite of passage for many Taiwanese, while cycling in general has become fashionable across all segments of the population. Today it is the fourth most-popular primary form of physical activity among Taiwanese after walking, jogging and basketball. 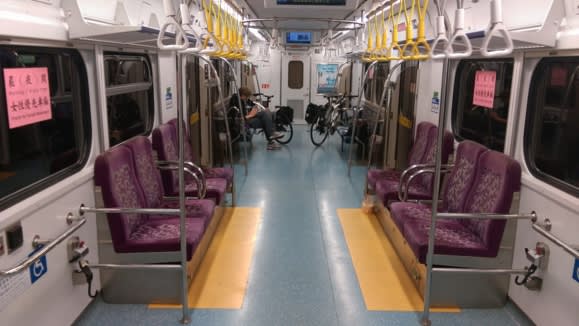 Bike-friendly trains make it easy for cyclists to go straight to their preferred cycling destinations in Taiwan. (Photo by Chris Horton)

"Cycling gives me a great feeling of freedom, an indescribable happiness," said Hu Yen, who was introduced to cycling in 1992 by her husband, Alan Ma. Since 1997, Hu and Ma have run Alan's Mountain Bike, one of Taipei's oldest bike shops.

Straddling his bike at the north end of Coastal Highway 11 on Taiwan's scenic east coast, Taipei resident Chong Jyun-shen took a short water break. Helmeted and wearing a scarf covering part of his face from the hot sun, he wore a high-visibility vest over long sleeves and shorts over black leggings.

Chong was on his second huandao by bicycle. Like many Taiwanese, he had done it on a motorized scooter first. Like many others, he was inspired by "Island Etude" and its signature line: "There are some things ... if you don't do them now, you'll never do them in your life."

"That line moved a lot of people," said Chong, who recently completed a cycling trip from China to Turkey.

PIT STOPS Chong was speaking at a fire station rest stop that provides water and refuge for cyclists. Such stops are a part of the infrastructure that Taiwan's government has put in place to facilitate cycling. Bike lanes along the coast are often as wide as car lanes. Police stations also serve as rest stops, offering water, shelter, and even light maintenance and repairs. Bicycle-friendly trains add flexibility for cyclists. 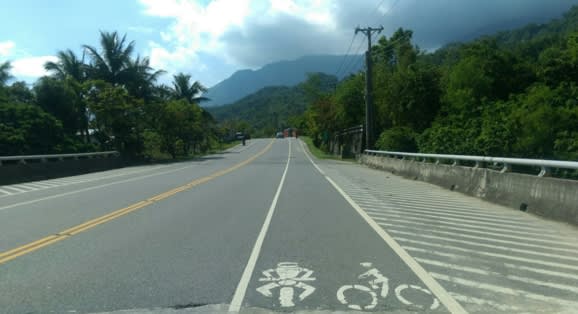 Bicycles are given plenty of space on the 900km bike path circling Taiwan. (Photo by Chris Horton)

Local businesses big and small are cashing in on Taiwan's bike boom -- most notably Giant. Ma's bike shop in Taipei sells a wide range of Giant bikes, priced from $95 to $5,000. Networks of bike rental shops, including one run by Giant, have sprung up around Taiwan, allowing riders to pick up a bike in one city and return it in another.

Hostels and small hotels in Taiwan's cities and countryside are also benefiting from the vibrant cycling culture. Many of these establishments cater specifically to cyclists, while others, such as Blue Coral Bed and Breakfast -- located in an unpopulated stretch of the east coast -- say there are more and more cyclist guests.

"I didn't have many cyclists staying here in the early years," said Lee Hwan-chin, owner of Blue Coral. "Now cyclists are a third of my business. Maybe a third of those are Taiwanese, the rest come from all over -- Hong Kong, Malaysia, Russia, the U.S." Many public toilets along Taipei's riverside bike paths allow cyclists to bring their bikes inside to avoid theft. (Photo by Chris Horton)

The needs of cyclists are also well-catered for by Taiwan's 5,000-plus 7-Eleven grocery stores. Aside from offering food and drinks, 7-Eleven has train ticketing services and even acts as a postal service, allowing items such as clean clothes or laptops to be sent to strategic locations along the route.

Eric Lin, director of the Taiwan Tourism Bureau's international department, said that the number of bicycle tourists coming to Taiwan has been growing steadily in recent years. "We're promoting Taiwan as a cycling destination in other markets, highlighting how convenient it is," Lin said. Chinese-speaking cyclists from China, Hong Kong, Malaysia and Singapore were primary targets, he added.

Cycling has changed how many Taiwanese view their own country, according to Ma. He described two types of Taiwanese cyclists: those focused on speed and those focused on experience. The speed-obsessed may finish the 900km circuit of Taiwan in a week or so, but for many who take the time to explore over a two-week period, he said, the journey has a profound impact, reinforcing Taiwanese identity, as it did for the protagonist of "Island Etude."

"They end up loving their country even more than before," Ma said.