Bringing the joy of reading in rural Laos

A local publisher plants the seeds of literacy for children Schoolchildren in the village of Nakang read to each other. (Photo by Karlee Taylor)
JOHN DUERDEN, Contributing writerFebruary 16, 2017 12:00 JST | Myanmar, Cambodia, Laos
CopyCopied

LUANG PRABANG, Laos "'Lao people don't read,' that's what people said," said Khamla Panyasouk, commenting on the reaction of his countrymen back in 2006 when he started a publishing venture aimed at taking children's books to rural villages.

A January 2017 visit to the Big Brother Mouse bookshop in Luang Prabang, the capital of Laos until the communist takeover in 1975, shows that much has changed. Many of the 350 books that Khamla has published in the past decade are displayed on the shelves, from children's stories like "Bangkok Bob," about a mouse that goes to the big city for the first time, to traditional Laotian folk tales and nonfiction titles.

The place is packed with tourists conversing with local students to help them with their English. A few of the visitors are buying books, others are arranging to sponsor the production of a new Big Brother Mouse title, and some are organizing a book party in a rural destination, where children and parents gather to consider the literary offerings. In 2016, there were more than 1,000 such book parties held in small villages under the bookshop's auspices, a big increase from 2007, when there were just 31. Those original doubters had a point, however. Literacy levels in the country have traditionally been low by international standards, languishing at 60% in 1995. They were lower still in rural areas where, according to the World Bank, nearly two-thirds of the population resides. Making matters worse, around half of the ethnically diverse population does not use Laotian, the language used in the school system, as their mother tongue.

As challenging as these conditions are, the original issue is still the biggest obstacle: The lack of books and the absence of a reading culture. It was tourists flocking to Luang Prabang who helped inspire Khamla. In a country where reading for pleasure was virtually an alien concept, it was puzzling to see visitors from overseas doing just that during their spare time.

"The only books children saw were government textbooks," Khamla said. "Most people over 50 or 60 here did not go to school." Khamla started reading at age 12, when he joined a local temple to be ordained as a monk in 1995. "There were just not many books around and no bookshops," he recalled. Then, during a visit to Chiang Mai in neighboring Thailand, he was inspired by the sight of shops bursting with books, and vowed to do something about the situation in Laos. "We started [the businesss] from nothing," he recalled.

In 2006, Big Brother Mouse was the first organization to receive a publishing license in the city. Being pioneers of a new book culture came with some challenges. Khamla and his team found that the Laotian script did not lend itself to computers, so they designed a new font. But there were larger hurdles. "Making books was hard because there were not many books [in Laos]." Few books means few readers. When people do not read, there is little reason to write, he explained. "It was very hard to find local writers."

It was the same with designers, illustrators and others whose skills are vital in the publishing business. "Most of them have only basic skills, so we have to spend time to teach them and train them to do a better job," Khamla said.

Big Brother Mouse has published fewer books in the past two years in order to focus more on distribution -- actually getting the books to children in the countryside. 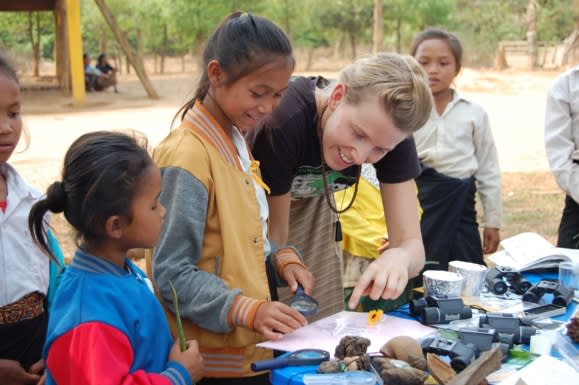 AUSTRALIAN INPUT Creative Literacy Laos has a big part to play here. Founded in 2012 as a nongovernmental organization by Australian Karlee Taylor, the group's volunteers have delivered well over 10,000 books to children in the countryside. The task has presented daunting logistical challenges in mountainous regions with few public transport options.

"The villages we are working in now are very remote and take many hours to reach, including travel by boat and walking," said Taylor, a volunteer herself. "They also require government permission to enter. Bringing people and resources into these villages to run activities can present challenges. These places can be difficult and costly to reach and are therefore difficult to visit regularly or maintain channels of communication to the district."

Creative Literacy Laos, which works with 24 schools and has set up 25 mini-libraries, has had some success in raising funds through online crowdfunding, but it has also gained support through more traditional events in Australia. Taylor's mother, Jane, is not only a board member of the organization but also a teacher at the Redwood Park Preschool in Adelaide, the capital of South Australia. Since launching fundraising efforts in 2011, the school has brought in thousands of Australian dollars. "It has been fantastic," said Taylor. "We do a pre-Christmas charity fundraiser to teach the kids it is better to give than to just receive. The parents and children love it."

The project also spreads awareness of Laos and the country's culture, she added. "I wanted to put some cultural diversity in my program and this has been perfect. I started teaching my class about Laos and we wrote letters. The feedback from Laos has been great, too."

Big Brother Mouse and Khamla's work was recognized in 2008 through an award presented by former U.S. President Bill Clinton as part of his Clinton Global Initiative. Khamla estimates that the body has given over 200,000 Laotian children their first book. A study commissioned by Khamla in 2014 found that children in the group's reading program improved their reading skills far more rapidly than those who were not. According to Khamla, the government now understands what his organization is trying to do and is more cooperative, removing red tape whenever possible. Primary school students in the village of Nahao test their reading skills. (Photo by Karlee Taylor)

According to UNESCO, the literacy level in Laos in 2015 improved to 80%, an impressive growth pace, although still significantly behind those of neighbors Thailand and Vietnam, which both hover at around 95%.

According to Karlee Taylor, there is much still to do. "Our initial design of training part-time education professionals already in relevant roles in the region was successful while it lasted but not as sustainable as we initially hoped." Staff were often promoted or transferred elsewhere. "We now hope to attract funding for training of community members as our 'literacy champions' and think this will be a far more effective model."

Big Brother Mouse is also as committed as ever. "We are still taking fun books to villages for children who have only ever seen a textbook," said Khamla. "We have to make them excited about reading. It is hard but I think Lao people are reading now."