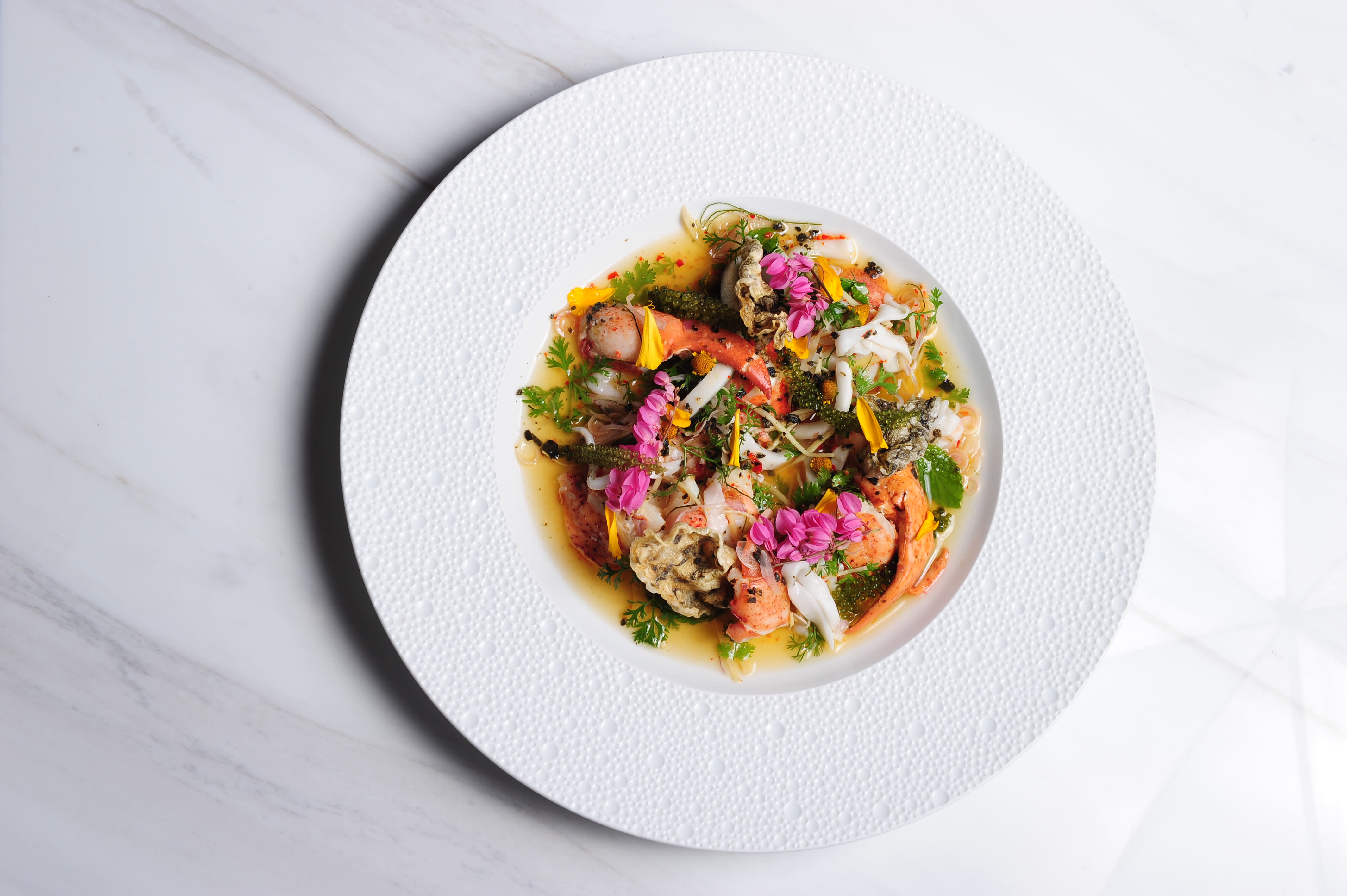 MACAU Bubbling with fountains of champagne and tabletop fields of sushi and caviar, Asia's 50 Best Restaurants Awards boasted the glitz of a red-carpet Hollywood opening and the suspense of a potboiler novel. Often referred to as the Academy Awards of Asian cuisine, there was no mishap here over the wrong envelope. Instead, it was a simple case of deja vu.

The winner was charismatic Indian chef Gaggan Anand, 39, whose eponymous "progressive Indian cuisine" restaurant in Bangkok took the No. 1 ranking for an unprecedented fourth time in a row. "Beating yourself is the hardest thing," he said on receiving the prize.

Gaggan has grown accustomed to challenging himself as he regularly revamps his tasting menu, while collecting a stream of honors from 50 Best and others. In December, he received two stars in Michelin's first Bangkok guide. Michelin, known more for its prestigious restaurant guides than its vast tire-making operations, launched its Bangkok guide after adding Singapore, Seoul and Shanghai in 2016. A guide to Taiwan debuted in March, bringing the French-based group's Asian collection to eight markets. 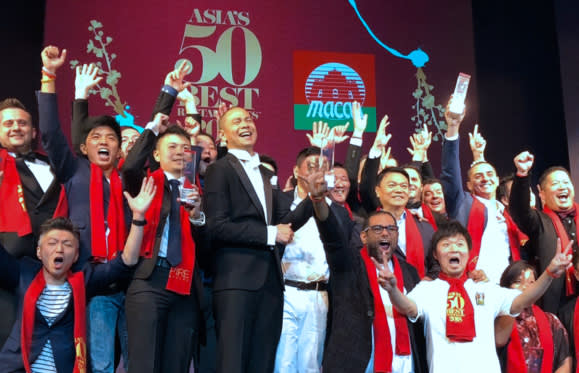 The winning chefs at Asia's 50 Best Restaurants awards, held on March 27 at the Wynn Palace Hotel in Macau, gather on stage to celebrate. (Photo by Ron Gluckman)

Gaggan and other speakers at 50 Best said that the event should not be viewed as a competition but rather as a conference of those devoted to cuisine: chefs, restaurateurs and gourmets. Over several days in Macau before the March 27 award ceremony, a packed schedule of food talks, cooking demonstrations and networking events stretched into the night.

This was the first time that the Asia's 50 Best event was held in Macau, after two years in Bangkok and three in Singapore. "We want to keep moving around," said William Drew, group editor of Asia's 50 Best Restaurants. "Part of this is about bringing more exposure to great food everywhere." While the event was held at Wynn Palace's Macau casino complex, many chefs spent much of their time in old Macau, which began as a Portuguese colony in the 1500s and was Europe's earliest port in Asia. Macanese cuisine can claim to be the world's first fusion food, blending flavors from Portugal, China and Portuguese colonies from Asia to Africa. "We raced into the old town and went everywhere," said Luca Appino of La Bottega di Luca, an Italian restaurant in Bangkok. "We wanted to try everything."

Italian legend Umberto Bombana hosted a star-studded degustation at his restaurant 8 1/2 Otto e Mezzo Bombana. After gaining three Michelin stars for the restaurant he opened in Hong Kong in 2010 -- the guide's only three-star Italian restaurant outside Italy -- Bombana opened in Shanghai in 2012, Beijing in 2013 and Macau in 2015.

"We thought, 'Let's make it fun,'" said Bombana. "'We'll get an Indian chef, a Thai chef, French modern, some Italian, and Japanese.'" Although the list of the top 50 restaurants was dominated by long-standing mainstays, eight new names joined. They included La Cime, a French eatery in Osaka, which debuted at No. 17. Two other young restaurants leaped up the charts by 25 places, the biggest jump this year: Mume in Taipei, to 18th, and Hong Kong's The Chairman, to 22nd.

Japan dominated the ranking with 11 listings, while Hong Kong and Thailand had nine. Malaysia, Vietnam and the Philippines were all shut out, although Manila's Toyo Eatery won an award as a special place to watch. 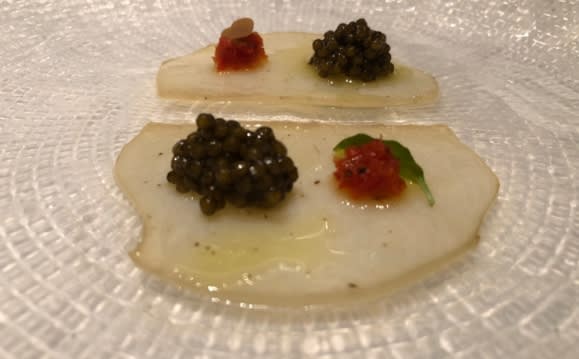 Singapore had seven listings, South Korea and Taipei three each, India and Sri Lanka two, and Indonesia one -- Bali's Locavore. Mainland China had only two listings, both for Shanghai restaurants. One was Paul Pairet's inventive Ultraviolet, where just 10 diners are served nightly with a 20-course meal in a multimedia environment. It ranked eighth on the list, with the other Shanghai restaurant, Fu He Hui, at 30th.

Michelin and 50 Best have widely disparate systems for ranking restaurants. While Michelin says it sends staff experts to survey dining rooms in the running for its highly coveted stars, 50 Best uses a system of anonymous judges. Asia is divided up into distinct regions, each chaired by a food expert who taps volunteer voters, divided roughly in thirds between food critics, well-traveled gourmets, and chefs and restaurateurs, said 50 Best's Drew. Each voter nominates 10 restaurants, up to six in their country of residence, with at least four more in other parts of Asia. Voters must have dined in nominated restaurants within the last 18 months. One of the youngest chefs to be honored, Bee Satongun of Bangkok's Paste restaurant, won Best Female Chef. She joined three past winners to put on a showcase lunch and gave an inspiring talk about the role of women in professional cooking.

The Diners Club Lifetime Achievement Award went to Taiwan's Andre Chiang, who is best known for the acclaimed Restaurant Andre in Singapore. He spoke passionately about Asia's growing community of chefs, and highlighted the impact of a new generation pushing the limits of gastronomy. "This is the kind of award you are more often given at the end of your career," quipped the 41-year-old chef. Chiang shocked the culinary world with the sudden closure of his small, celebrated restaurant in February, resulting in a rock star-style farewell event with ticket prices soaring to $600.

Gaggan spoke about the need to continually challenge oneself. He opened a small Bangkok eatery entirely devoted to tofu the same week as the Macau event. But he plans to close his flagship Gaggan restaurant within two years and move to Japan. "It's all about moving on, challenging yourself and pushing the limits for food."

Drew said the awards celebrate the diversity and growing appreciation of Asia's numerous cuisines. "Nowadays, people travel for food. This is not just about feeding people, but the entire dining experience. It's really like show business."