Can a building reflect a culture and get those working inside to act morally? BANGKOK -- By the river in a quiet and unusually dull area on the northern edge of this metropolis, 13 tower cranes stand poised over an enormous excavation that has been temporarily covered with steel sheets.

It is a desolate site made to look even more so by the almost daily squalls that the rainy season sends its way.

Well upstream of all the commercial and tourism action, this stretch of the Chao Phraya sees mainly river buses plying to and from the suburb of Nonthaburi as well as the ever-present rice barges. Cranes stand at the ready at the site of Thailand's future parliament building. (Photo by Ken Barrett)

Within a few weeks, however, the dangling crane hooks will be loaded with building materials. Workers will swarm the site. And up will go what is to become one of Bangkok's most majestic riverside landmarks.

Thailand's new parliament building, after years of controversy, is about to transform this part of the city, bringing in government personnel, commerce, residents and tourists.

In a quintessentially Thai way, the undertaking came together in an almost casual manner, with a competition for the design held in 2009 and progress since distinctly erratic.

Long delays in the clearance and handover of the construction site in the Kiak Kai district have held up work and led to the foundation being completed several months before construction of the superstructure could begin.

The lead architect had envisaged problems before he became involved.

"At first," Theeraphon Niyom recalled, "I wasn't interested in entering the competition, but my younger colleagues came to me and said that I must be a part of this because it is really important. 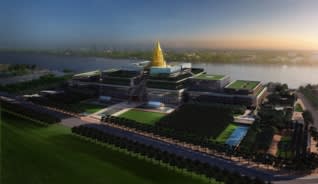 A rendering of the future parliament building

"They pointed out to me that it was very much part of our philosophy of integrating architecture with society, and would help to change the way in which Thai people thought about their heritage and their form of government."

Theeraphon is head of the Arsom Silp Institute of the Arts, an architecture school maintained by a foundation that uses project fees to help support the curriculum.

At 64, he has a certain tranquility. In the early 1970s, he was one of the founders of a successful commercial practice, Plan Group of Companies. In recent years, he has devoted his career to helping architecture students gain practical experience, and, hopefully, find it easier to solve problems when they go out into the world.

Theeraphon was speaking to the Nikkei Asian Review in a tiny meeting room at the Arsom Silp compound, formed by a series of Thai-style buildings set around a lake in a wooded area in the western suburbs. When we spoke, a group of students was working with carpenters and masons to build an extension.

Four architecture firms, including Plan Group of Companies, and one landscape design company all those years ago assembled under the name Sangob 1051 to submit a bid in the design competition.

The chairman of the selection committee said the Sangob design was chosen because it addressed the concepts of utility and design, and was a reflection of Thai identity. Theeraphon Niyom, center, and members of the Sangob 1051 design team take a break from a planning discussion

"We decided to use traditional Thai architecture as the main feature of the building because, in our opinion, it is too difficult for contemporary architecture to express Thai identity," Theeraphon said.

Theeraphon, who feels Thai politics and the Thai people have grown distant, said he hopes the building will not only symbolize a common purpose but also bring governors and the governed closer together.

"Thailand's politics are now in a crisis," he said, "in which the most important problem is the immorality of our leaders."

The design has three concepts behind it. First, Theeraphon said, the building must convey a "spirit of place" that would encourage integrity and a strong sense of morality in the people who use it. Next, the building must reflect Thai culture and identity. Finally, it must convey the power of the Thai people.

"The parliament building is a place where politicians execute their administrative duties for the nation," Theeraphon said. "We strongly believe that politics must have morality. ... The architecture has to support this supreme ideology, alongside other objectives."

The team based its design on tri phum, traditional Thai Buddhist cosmology that places Mount Meru at the center of the universe and nirvana on the most sacred peak. The lower parts of the universe represent heaven, earth and hell.

The main building has a stacked design and roof-garden terraces to represent Mount Meru. A golden stupa at its apex symbolizes nirvana.

"The intention is to suggest that if you do good deeds, you will be in heaven, or the other way around," Theeraphon said with a faint smile.

The site covers 160,000 sq. meters, 35% of which will be occupied by the building. Most of the rest of the area will be given over to greenery. A moat will provide a form of security. Importantly, the garden terraces and the riverfront will be open to the public.

"The design is for a people's plaza," Theeraphon said. "People can access the area on the top of the building with only conventional security restrictions."

Sino-Thai Engineering & Construction, one of Thailand's largest contractors, has been awarded a 12.2 billion baht ($337 million) contract to complete the building in 900 days.

There are plans to develop another 1.44 sq. km to create an enormous civic and government area, as well as to widen the road to cope with an increase in traffic.

As with many ideas in Bangkok, this plan may or may not come to fruition. In any case, a subway line is being extended to this part of the Kiak Kai district. So regardless of whether the parliament building gets erected, the eastern bank on this stretch of the Chao Phraya will eventually see a brighter future.