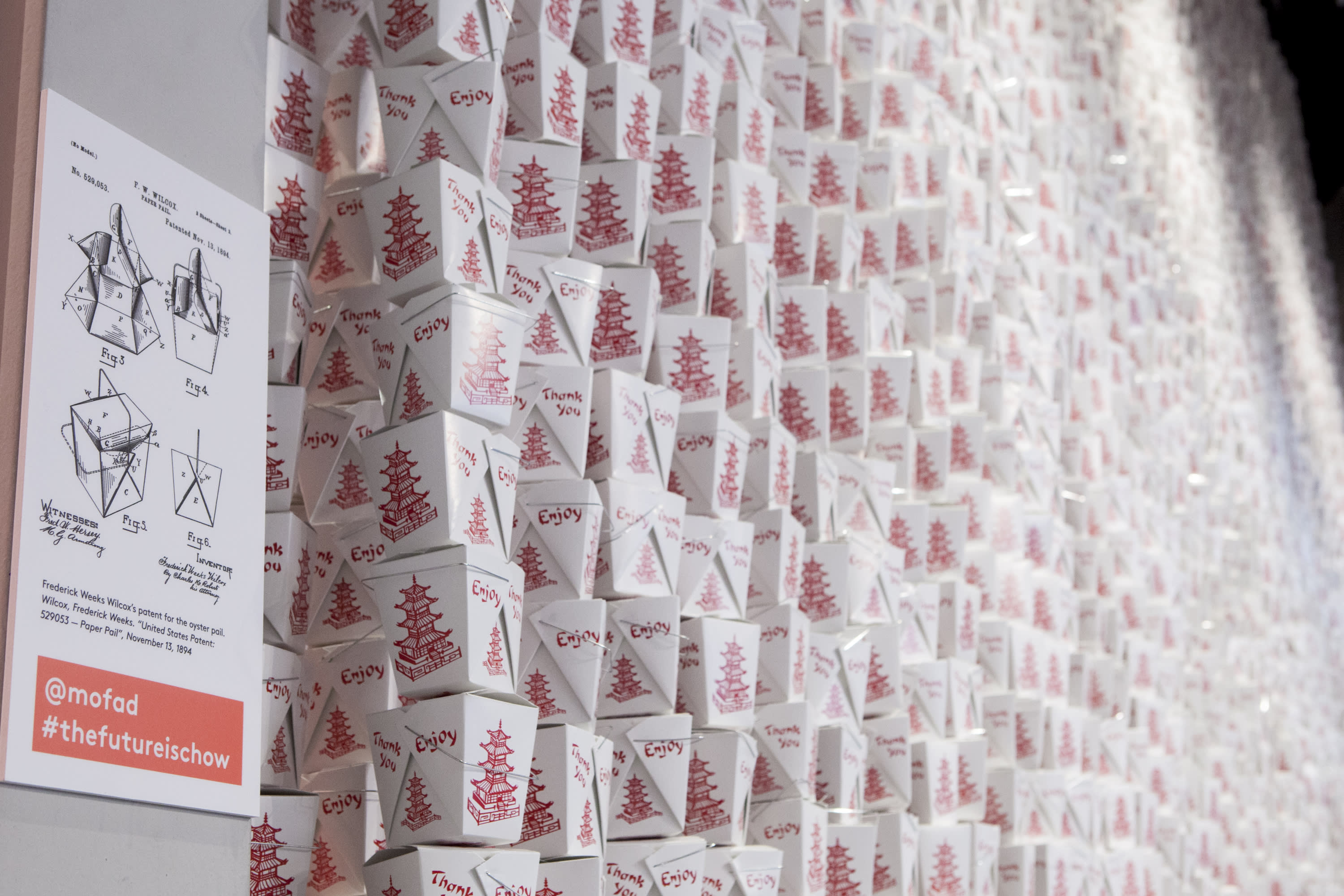 NEW YORK Chinese cuisine in America has come a long way from its early incarnation. For a long time, Chinese-American food tended to be thought of as cheap, greasy fast food to be eaten directly from the boxes it came in. But perceptions have changed, and these days Chinese restaurants are featured in fashion magazines and the cuisine is even showing up in museum exhibitions. The exhibition includes restaurant menus from as far back as the early 20th century. (Courtesy of the Museum of Food and Drink)

Fortune cookies, egg foo young and General Tso's chicken are bastardized versions of Chinese food that regularly feature on menus in the U.S. The popular impression of Chinese food as low-quality fare was partly the product of chefs being forced into the business. U.S. immigration laws in the late 19th century restricted employment for Chinese immigrants -- most of them men -- leaving many with little choice but to work in laundromats and restaurants.

Even though the laws were eventually abolished, migrants still tended to start out in the food business as a result of relatively low barriers to entry and close ethnic community ties.

Now, two museum exhibitions in New York -- a video installation called "Sour, Sweet, Bitter, Spicy" at the Museum of Chinese in America and the more interactive "Chow" at the Museum of Food and Drink -- highlight the place of American-Chinese food in U.S. culture, while celebrating a new generation of culinary talents whose kitchens now draw long lines. The MOFAD's "Chow" exhibition highlights the evolution of Chinese food in America. (Courtesy of the Museum of Food and Drink)

"If you grew up in America, you [have] probably [eaten] at a Chinese restaurant," said Emma Boast, program director at MOFAD. The difference now, she notes, is that customers are increasingly hungry for quality ingredients and care more about provenance.

New Chinese-American chefs often modernize traditional recipes for contemporary tastes. Ingredients are likely to be organic and locally sourced, and patrons get to watch up close as sous-chefs painstakingly make dumplings or laboriously pull dough to make noodles in the traditional method.

Such is the demand for Chinese food that professionals are leaving their jobs to open restaurants. Eddie Huang, whose memoir formed the basis for the U.S. sitcom "Fresh Off the Boat," is a former attorney who gave up corporate law to open Baohaus, a shop in New York's East Village. Huang sells bao, a Chinese snack of doughy buns with different savory and sweet fillings. Ironically, his father chose to open a steakhouse when they first arrived in Florida because steak commanded higher prices than Chinese food. Museum visitors can help themselves to some of the more than 600 fortune cookies this machine spits out each hour. (Courtesy of the Museum of Food and Drink)

With Mimi Cheng's Dumplings, which has two tastefully minimalist New York branches, sisters Hannah and Marian Cheng have turned their mother's Taiwanese recipes into a menu including dumplings made from pasture-raised chicken and pigs. The chain has been featured in Vogue magazine.

In Las Vegas, Sheridan Su runs one of the hotter tables in town with Fat Choy Restaurant, which serves a mix of Chinese and American fare, such as bao and burgers, and a fusion Fat Choy Breakfast of eggs, bacon, sausages and pork belly.

TAKING LIBERTIES "These chefs are taking liberties with really amazing food, which is neither entirely Chinese nor American," said Mike Lee, CEO of food design company Studio Industries, and a consultant to the museum show "Chow." He said: "Chinese-American food is a story you can only tell in America, and it's really beautiful that a fusion food is now normalized."

Indeed, Chinese-American food has evolved from its Chinese roots, to feature fried and sugary dishes and a heavy preference for meat. "Chinese-American cuisine is much sweeter and with bolder flavors, whereas generally speaking, on the [Chinese] mainland, Chinese food can be light and fresh," said Lee, whose grandfather opened a Chinese restaurant in Detroit in the 1940s.

Cooking techniques also differ, with sauces more heavily used in the U.S. According to MOFAD's Boast, American chefs have developed their own system of more than 100 sauces to accompany dishes like General Tso's chicken, which is drenched in an orange sauce named after a Qing dynasty statesman, Tso Tsung-t'ang. Such sauces developed from a technique popularly employed in the U.S. of thickening cornstarch to create gravy. 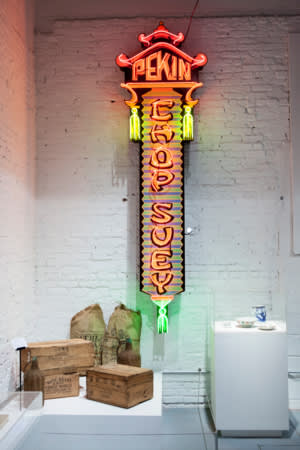 A 3-meter-high neon sign from Pekin Noodle Parlor, a 105-year-old Chinese restaurant in Butte, Montana (Courtesy of the Museum of Food and Drink)

The public can view -- and taste -- that metamorphosis at MOFAD in Williamsburg, a neighborhood in the hip New York borough of Brooklyn. Guests are greeted by a wall of suspended takeout boxes about 4.6 meters high, which represent the roughly 50,000 Chinese-American restaurants in the U.S. Restaurant menus from as far back as the early 20th century line the walls, while a fortune cookie machine spits out more than 600 pieces per hour, which guests are encouraged to scoop up.

Tucked away in a corner is a 3-meter-high neon sign from Pekin Noodle Parlor, a 105-year-old Chinese restaurant in Butte, Montana. Visitors can also snack on dishes such as tofu with crab sauce and honey walnut shrimp served up by a rotating cast of star Chinese-American chefs, such as Jonathan Wu.

The reception so far has been positive. MOFAD launched a Kickstarter crowdfunding campaign to raise $80,000 to help fund the show, cover the costs of the fledgling museum and raise awareness. In the end, more than 650 donors chipped in almost $91,000.

Perhaps those most surprised by this sudden spark of culinary interest are older chefs who had toiled for decades with little recognition.

"It was a bit surreal for my family to see all this stuff," said Lee, whose father and extended family operate restaurants. "It's inconceivable, because cooking was just a means of survival. They had a good work ethic, but they never really expected that the stuff they were doing would end up in a museum."