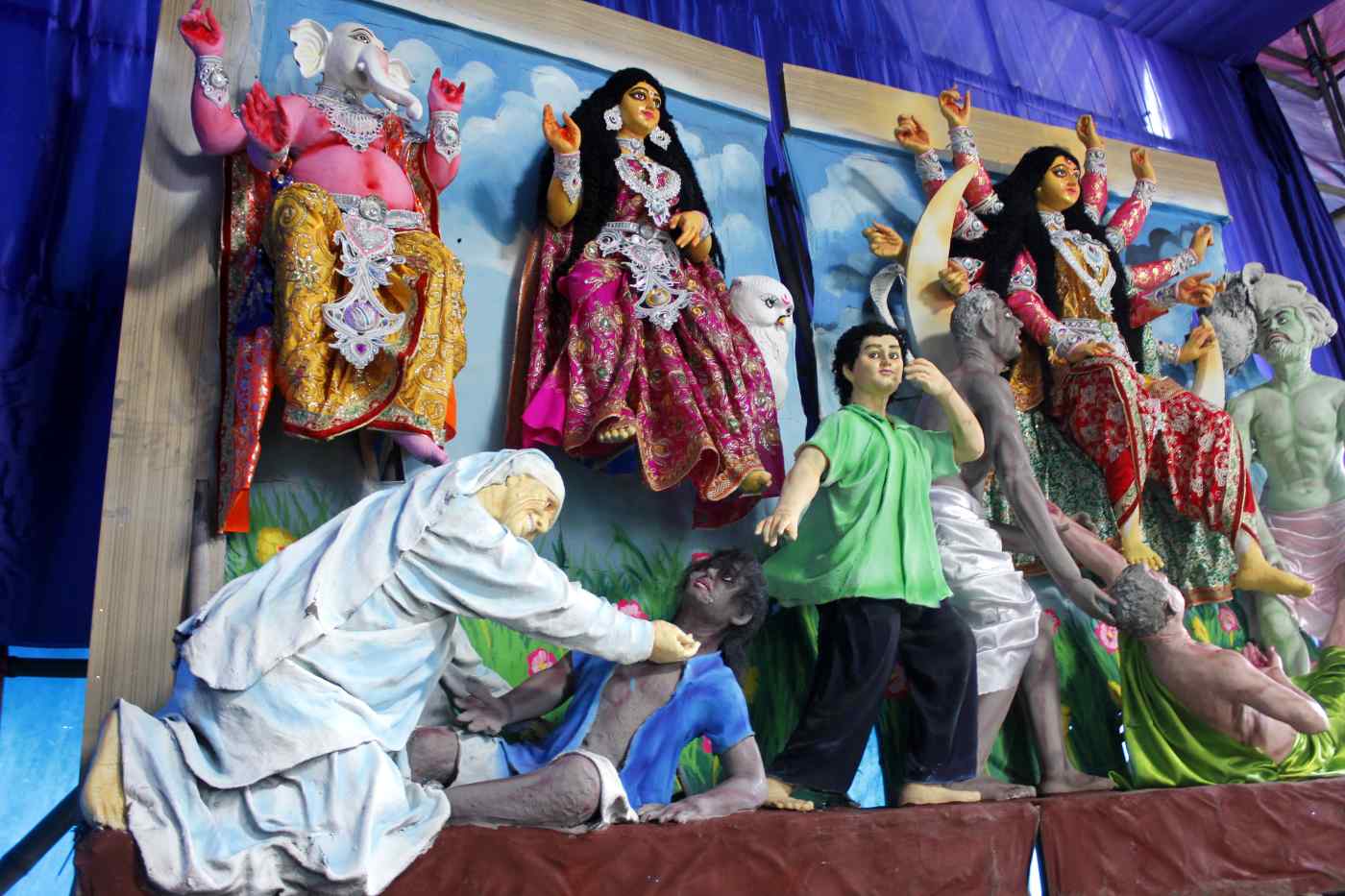 SILIGURI, India -- At a Durga Puja pavilion in this sub-Himalayan town, Mother Teresa, the Roman Catholic nun who was canonized by Pope Francis in September, is seen sharing a pedestal with Durga, the supreme Hindu goddess of power.

With them are Durga's children - Saraswati (goddess of learning), Lakshmi (goddess of wealth), Ganesh (the elephant-headed remover of obstacles) and Kartik (god of war).

"The theme is about our mothers -- the divine mother Durga in heaven and Mother Teresa who was sent to earth by the gods to serve humanity," said Bikash Pal, a clay artist who worked on the idols with his father Binoy Pal for over a month.

Durga-worship spans six days spread over just under two weeks, beginning with Mahalaya, the day on the lunar calendar when the goddess descends on earth from her heavenly abode. This year, Mahalaya was on Sept. 30 and Shashthi to Dashami, the main days of celebration in the state of West Bengal, run from Oct. 7 to Oct. 11.

Handcrafted clay idols of the goddess are put up in marquees called pandals, which become cultural epicenters for the communities that come together to organize pujas, prayer rituals that honor one or more of the deities, and spiritually celebrate the event. An idol of the goddess Durga created for the Durga Puja festival in Kolkata. (Photo by Sondwip Mukherjee)

As a unique street art festival, Durga Puja brings together craftsmen, artists and people of all trades to put together idols and pandals in temporary exhibitions thronged by millions. Billed as the biggest such event, and often compared in size and color to the annual Carnival in Rio de Janeiro, it sees about 20,000 pujas in the state of West Bengal, including 3,000 in Kolkata, the state capital. Durga Puja is also celebrated across India and the world by the Bengali diaspora.

At the Ujjwal Sangha Durga Puja in Siliguri, 600km from Kolkata, Mother Teresa is also seen attending to a leprosy patient, playing with children and treating Monica Besra, whose miraculous cure from cancer played an important role in Mother Teresa's canonization.

"I dedicate this work to my mother," said Bikash Pal, whose mother, Karuna, died in late September. Despite the tragedy, the Pals have been at their studio working hard to get the idols ready in time for the inauguration. "Mourning can wait. Durga Puja cannot," said Bikash Pal.

The fall sun slants down and the air is rent by the heady smell of the chhatim flower and the rhythmic beats of the dhak, a traditional Bengali drum. The pujas are here and people are already pandal-hopping in their new clothes.

Mother Teresa, who spent her life caring for the destitute in Kolkata, is clearly the toast of the celebrations. At a Kolkata puja, a life-size statue of the saint has been placed in a "selfie" zone. In another, an exhibition of photographs has been organized. "We have been able to put together some rare pictures of the Mother," said Anjan Samaddar, a member of the organizing Naktala Udayan Sangha Club.

Mother Teresa, now known to Catholics as Saint Teresa of Calcutta, is one of the greatest icons of Kolkata, formerly known as Calcutta, and her canonization is a big reason to celebrate, said Avijit Nandi Majumdar, president of Impact, a nongovernmental organization based in the city. Every year Impact gives out awards to the 10 best pujas in Kolkata for their creativity, aesthetics, crowd management and adherence to safety rules. This year, the Chinese consulate is providing fully paid holidays in China to the organizers of the top four pujas. Mother Teresa's Catholic religion is not an issue for the organizers of the Durga Puja. "The Pujas are very inclusive affairs bringing together all faiths," said Nandi Maujmdar. "There are many pujas organized with the active participation of Muslims. The spirit of the festival is secular. It is not so much about religion but more about art and culture."

In 2013 the Associated Chambers of Commerce of India (Assocham) put the revenue generated by Durga Puja-related activities at 250 billion rupees ($3.76 billion), a figure which was predicted to reach 400 billion rupees in 2015.

"The economy around Durga Puja is massive," said Nandi Majumdar of Impact. "It generates employment and supports families throughout the year. It is that time of the year when almost all sections of society, from artists to traders, make their earnings. It is the biggest industry in Bengal."

For an industry-starved state with a dubious reputation for work culture, the annual Durga Puja is a time of frantic economic activity. The pujas, traditionally supported by subscriptions and donations, are increasingly funded through corporate sponsorships and selling of advertising space.

This trend, which took off in the 1990s, helped do away with the age-old system of fund-raising through subscriptions, which often bordered on extortion as ordinary people were pressured into making donations for pujas in their localities and beyond. As a result, the pujas have evolved into a brand-building exercise, with every puja clamoring to win at least one of the many awards offered by different organizations as this can ensure better funding prospects in future.

"Honestly, funds are not a problem at all," said Naktala's Samaddar. "There is always a line of companies wanting to gain mileage by partnering with us." With an air-conditioned pandal, Naktala's puja, themed around Mother Teresa and Mahashweta Devi, a recently deceased Bengali author, had a budget of about 5 million rupees. Not all puja organizers can pool in such large sums of money.

Mother of all themes

Most leaders of West Bengal's ruling Trinamool Congress party are patrons of pujas. Political support helps in some ways, but has also led to an outbreak of competitive sycophancy among the pujas.

Some pandals play recorded "theme songs" written by Mamata Banerjee, who is leader of the ruling party and state chief minister and widely known as Didi, or elder sister. Other pandals have lined up photographic exhibitions celebrating Banerjee's achievements. Fierce competition ensued to get the chief minister to inaugurate puja pandals. So many pandals, so few days; Didi just about managed by lighting the inaugural lamps days in advance.

But it is a puja in Nadia, more than 100km from Kolkata, that takes the cake. It includes a fiberglass model of Banerjee in the form of the goddess Durga, but with 12 hands instead of 10. Two hands are folded in a gesture of namaste, the Indian greeting, while the others showcase government projects.

Banerjee has worked hard to help the festival go well, declaring an extra puja holiday on Oct. 6, nominally to reward the population for defying a general strike called by trade unions in the state on Sept. 1.

If there is anyone who wants the pujas to be over quickly it is the police. In an elaborate security operation more than 12,000 officers are tasked with managing the crowds in Kolkata, with the help of closed circuit television surveillance and cameras mounted on drones. Last year, a stampede at a south Kolkata puja with the festival's tallest Durga statue, nearly 27 meters, left many injured. The police clearly do not want a repeat.

Meanwhile, at their studio in Shaktigarhin Siliguri, the Pals heave sighs of relief as they near the end of their order backlog. As the start of the festival approaches, it is finally time to mourn their matriarch.