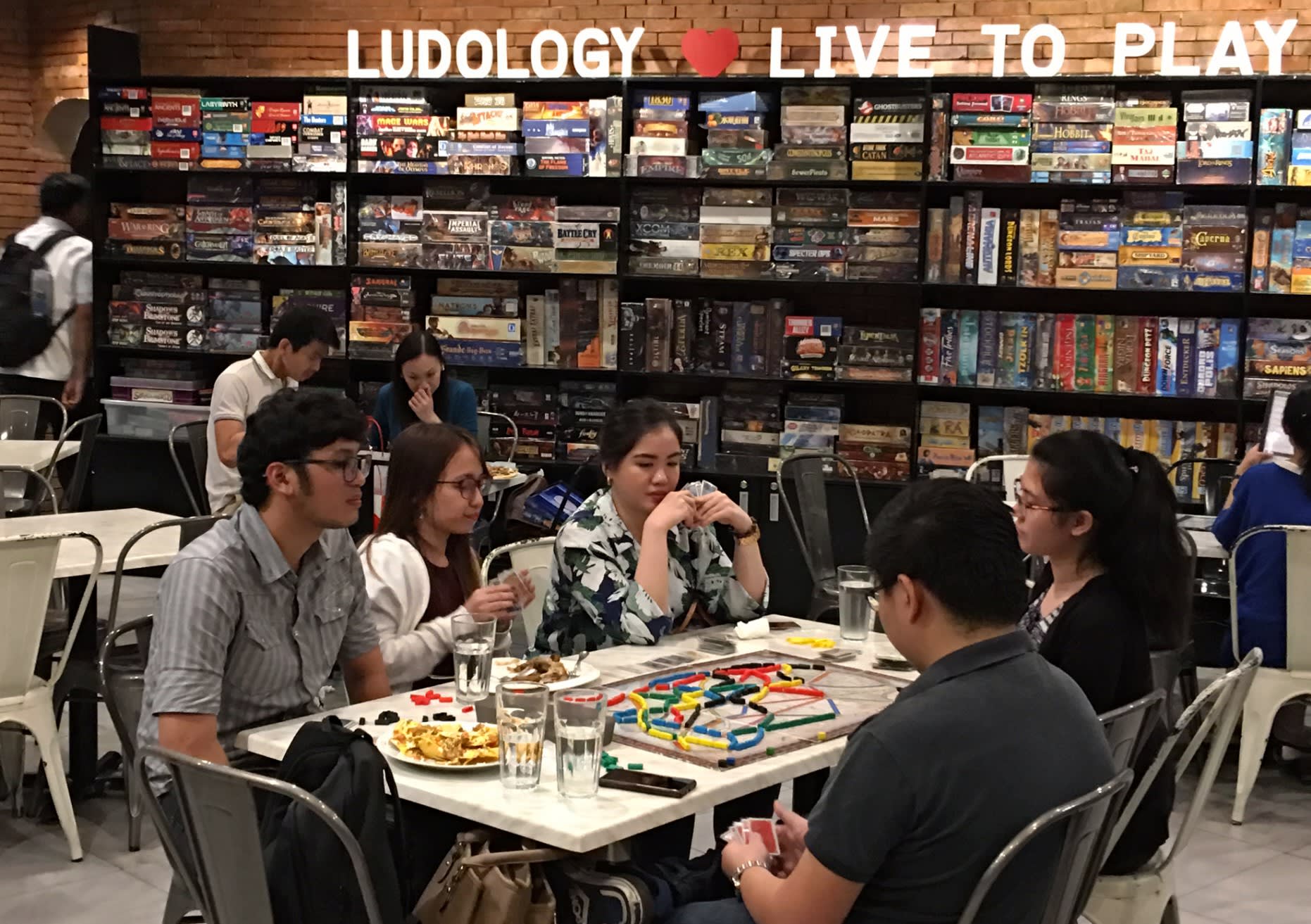 MANILA -- In a sort of backlash against the pervasive presence of social media, playing board games with family and friends in cafes is becoming an increasingly popular pastime in the Philippines.

There are at least a dozen board game cafes in Metropolitan Manila alone, which are thronged with young people and families on weekends. Although social networking services are widely used as daily tools for communications in the Philippines as in other countries, Filipinos are rediscovering the pleasures of face-to-face communication through board games.

In late December, Cristina Ondes, 25, visited Ludo, a board game cafe located in a business district in Manila.

As soon as she entered the cafe, Ondes started playing a game with her friends. She said she enjoyed spending time with friends at the establishment, which she described as an easy and effective way to relieve stress.

Ludo, which opened in 2014, is one of the first board game cafes in the country. Its shelves are filled with some 600 board games for visitors to play.

The most popular game at the moment is "Resistance Avalon," a 5-10 player battle game that pits two sides against each other in a setting representing a medieval British kingdom. Players battle each other while guessing the roles of their opponents, whether they are on the "good" or "evil" side.

Other favorites among Ludo customers include "Cards Against Humanity," a party game in which players score points by giving the funniest answers to questions, chosen from the answer cards they hold; "Exploding Kittens," in which players take turns drawing cards until someone gets an explosion card and loses the game; "Dixit," in which players score points by correctly guessing the card with an image the "storyteller" has chosen to create a sentence. The guessing is based on the cards other players have selected from those they have which they think best match the sentence.

At the table next to Ondes, five young people were having a grand time playing "Ticket to Ride," in which players collect train car cards and claim railway routes on a map of U.S. states.

"In a board game, they put their phones down, they talk to each other and they focus on the game," said Carlos Sandico, the 43-year-old co-owner of the cafe. While Ludo is a popular hangout among board game enthusiasts, the cafe's target customers are neophytes who do not have their own games.

The cafe buys new games every month, and "gurus" are available to teach newbies how to play them.

There are no video games in the cafe, which also helps to create a friendly environment for parents with young children.

The cafe attracts 100-120 customers a day on weekends. Customers order drinks or dishes and can play games for free.

Items on the menu are offered at prices not much higher than at ordinary restaurants, with a dish of pasta costing 250 pesos ($5) and a glass of beer 95 pesos.

Customers spend one to two hours on average at the cafe. People staying longer are encouraged to order something every two hours.

Board game cafes have popped up in the capital in the past two years or so.

Louie Lao, who runs Snacks and Ladders, a board game cafe in Quezon, Metropolitan Manila, said the number of people who want to have face-to-face communication with others while playing analog board games is increasing, exactly because IT has so deeply permeated society.

People's daily lives in the Philippines are inundated with social media. But Filipinos tend to place great value on their personal ties with family and friends and are unwilling to dispense with analog modes of communication.

Running a board game cafe in the country, however, has become more challenging despite its initial success. Competition is growing, and spending per customer is not large considering the relatively long average stay time.

Some establishments have been forced to close.

"Board games in general are faddish. You always want to try something new," said Lao of Snacks and Ladders.