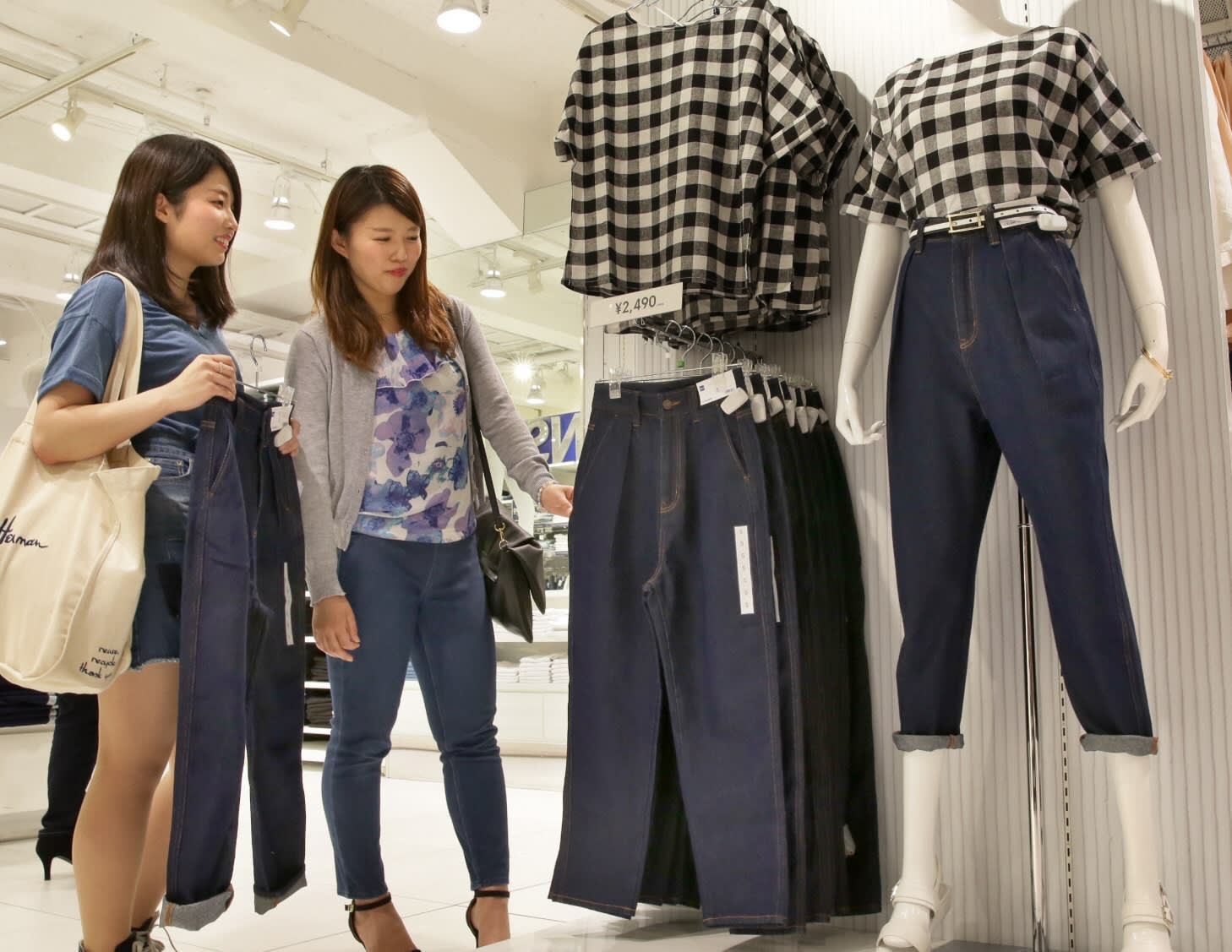 TOKYO -- Nerdy is the new cool among young Japanese girls. For those girls who are not familiar with the fashion trends of the 1980s and 1990s, oversized jeans matched up with a checkered shirt and a pair of geeky black glasses are a source of new inspiration. The nerdy cool or nerdy cute, as the style is redefined, is a new fashion statement that defies today's much-adopted go-to look of simple cool.

"I was so intrigued by this weird design because I've never seen it before," Kazuki Kaku, a 19-year-old university student in Tokyo, said on a recent visit to a GU clothing store in the Shinjuku district in central Tokyo. GU is a sister brand of Uniqlo, a popular fast fashion chain run by Japan's Fast Retailing. What caught her eye was the "high-waist mom jeans." Those high-rise denim jeans, which cover the hips and tummy, are much looser than the skinny jeans that have been popular in recent years. "I like this slightly nerdy feel," she said. 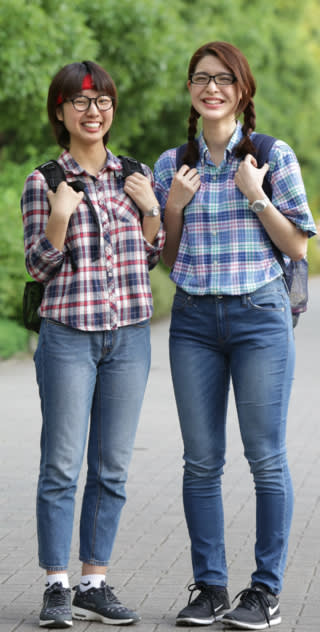 Chizuru Ioka, left, and Haruka Tanaka pose for a photo in Tokyo wearing their experimental otaku style with its roots in 1990s Japan. Body copyright:

A 13-year-old junior high school student was also interested in the look. "This baggy look feels new," she said, adding that "it will be cute if I paired it with a T-shirt tucked in." But her 42-year-old mother looked confused. "Are you going to tuck your tee in? That's so dated," she said.

But, the mother has a point. They are meant to be retro and a bit nerdy. GU said that the high-waist mom jeans were designed based on looks from hit American TV dramas in the late 1980s, 1990s and early 2000s such as "Beverly Hills, 90210," which aired in Japan. This revived trend drew younger generations' attention, and the jeans have been selling well since their launch in March, the company said.

Young girls are also discovering the new old on Instagram, a popular photo-sharing app. In early May, Chizuru Ioka, a 20-year-old university student from Yokosuka, a port city south of Tokyo, and her friend Haruka Tanaka, experimented with the otaku, or geek, style from 1990s Japan that they first saw on Instagram. They wore a red bandana around their heads, put on round, black glasses, tucked their colorful checkered shirts into their jeans, carried black backpacks and wore sneakers. Then, they headed off to Minatomirai, a commercial district in Yokohama. "I've always wanted to try this style that's been popular on Instagram," Ioka said. "I like the excitement that I get when I'm in clothes I usually don't wear," she added.

She is careful about details. The bandana, she explained, should not be worn like a plastic hairband over your head because that would be cute. It should be worn like a headband around your head to make you look nerdy cute.

"For today's teenagers who didn't grow up seeing the 1990s styles, the unsophisticated fashion sense seen in the mom jeans and the otaku style are rather new and fashionable," said fashion journalist Yoshiko Takahashi.