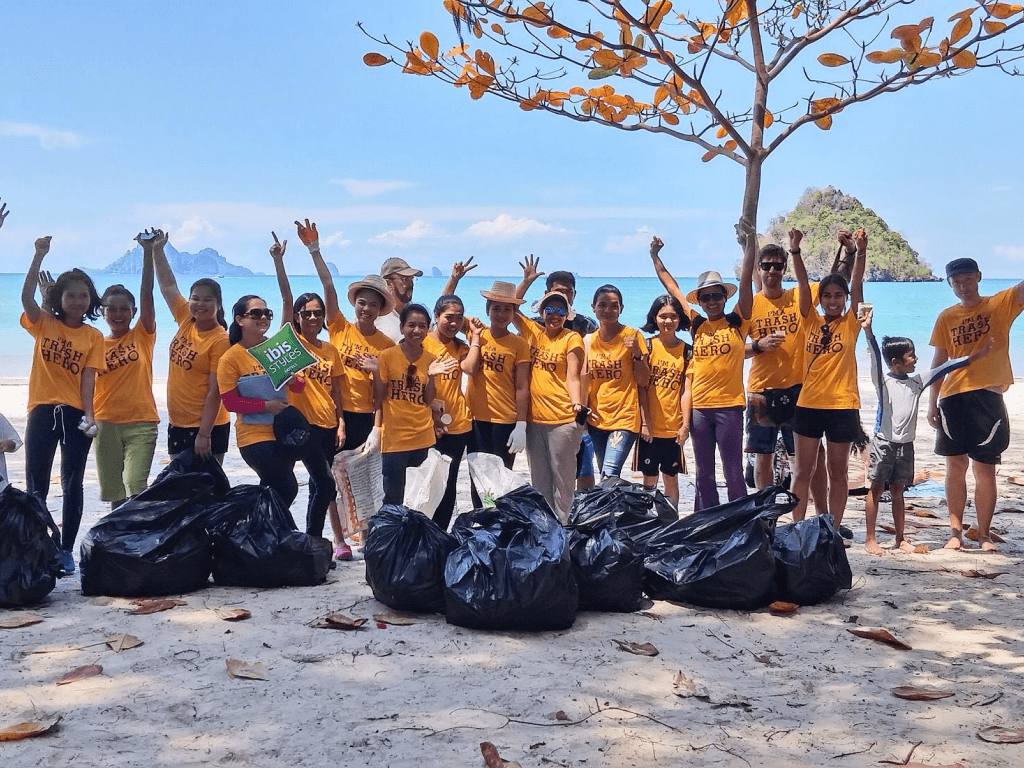 BANGKOK Even the remotest depths of the world's oceans are not immune to plastic pollution. Research recently published in the journal Nature Ecology and Evolution revealed alarming levels of toxins in crustaceans living in the Marianas Trench, the deepest known ocean trench.

The top six sources of ocean plastic waste are China, Indonesia, the Philippines, Vietnam, Sri Lanka and Thailand, according to a 2015 study published in the journal Science. The task of cleaning up discarded lighters, spent light bulbs, toothbrushes and plastic toys from beaches and waterways across Asia is daunting. But in Thailand, a grassroots movement, an entrepreneur and a hotelier have all proven that individual action can make a difference. KEY TO SUCCESS In December 2013, 17 people on Koh Lipe, Thailand's southern-most island along the Andaman Sea coast, rose to the challenge of cleaning up their beach. Their first organized cleanup has since morphed into a movement called Trash Hero with over 30 chapters throughout Thailand, neighboring Asian countries and as far away as the Czech Republic and the U.S.

By the end of 2016, the group had won two Thailand Green Excellence Awards and collected over 200 tons of garbage from Thai beaches and cities, with more than 21,000 volunteers participating in regular weekly cleanups.

Pennapa Krad, who goes by the nickname Nuu and heads Trash Hero Hua Hin, attributes the group's success to the power of social media as well as to its fuss-free approach to participation. "We make it easy to join -- no cost, no sign-up. Just show up and do the best you can," said Nuu, a food and beverage manager at Riad Hua Hin Hotel and a long-time voluntary litter collector. After discovering Trash Hero on Facebook, she reached out in early 2015 to establish a chapter in her area.

Branding has no doubt played an equally powerful role in the organization's success. "The main challenge was to transform the negativity around collecting trash into a positive message," said Swiss native Roman Peter, one of the Trash Hero founders. "That's why the name fits perfectly."

Beyond the beaches, Trash Hero is also looking to prevent garbage from entering the oceans and waterways. In December 2014, the group launched a program selling stainless steel reusable bottles. Buyers receive free water refills at participating outlets, currently numbering 150 in Thailand, for life. To date 25,000 bottles have been sold. The group estimates that if each bottle is used just once a day for a year, over 9 million single-use plastic bottles will not be purchased.

BETTER TOGETHER "Get on board!" is the rallying cry and slogan for Starboard, maker of stand-up paddleboards and windsurfers. Founder and former professional windsurfer and Olympian Svein Rasmussen is taking action to protect the oceans by driving innovation within his company and through partnerships with organizations like Trash Hero.

Starboard helped stage Trash Hero's first Bangkok cleanup in June 2016, with 200 volunteers collecting over 2,500kg of garbage from waterways. The company even designed a special "trash-picker" attachment for paddles to make the job easier. Svein Rasmussen, founder of watersports brand Starboard, paddleboards with his daughter near the company's headquarters in Bangkok. (Courtesy of Svein Rasmussen)

The Starboard team is constantly looking for ways to reduce the company's carbon footprint, at both the corporate and product levels. The company achieved its target of becoming carbon-neutral by 2018 two years ahead of schedule and is now looking for other ways to make a difference. Through a project called Mangroves for Life, for example, Starboard plants one mangrove tree at the Thor Heyerdahl Climate Park in Myanmar for every board the company sells.

When it comes to consumers, Rasmussen says they can reduce their carbon footprint "by voting with their wallets" and choosing products from companies that are taking action on environmental issues. Another Starboard partnership is with Parley for the Oceans, an organization that works to raise awareness for this environmental cause.

Sportswear manufacturer Adidas has also partnered with Parley in a project to use recovered plastic from the Maldives to make running shoes, an initiative launched in late 2016. Earlier this year, Adidas announced plans to make swimwear from recycled fishing nets and debris under the same partnership. "Because you purchased that shoe, you're taking action," Rasmussen said. "It's a product you want to talk about."

Rasmussen said he views his company and ones like it as "guinea pigs for other industries," because they are agile and able to implement changes that influence their supply chains by demanding increasingly sustainable solutions from suppliers. In Starboard's case, this means constant prodding to look for new, more environmentally friendly materials and production methods. Rasmussen views beach refuse as "a resource that washes in" and often challenges his suppliers to make use of the reclaimed material.

Despite alarming estimates of how much plastic is in the ocean, Rasmussen is adamant that change is possible. "It's never too late. We need people to understand [the severity] of the problem and take action quickly. We want to encourage everyone to do more. For example hotels could clean a little extra on either side of their beach frontage," he said.

SO LONG, STRAWS Some in the hospitality sector are also going the extra mile for the oceans. The Dolphin Bay Resort is located an hour's drive south of Hua Hin on the Gulf of Thailand. After Agathe Verge and her husband, Gregoire, purchased the property in 2013, they were amazed to see how many plastic drinking straws were consumed there. Many were washed ashore with the tide and were a common find among other beach refuse.

"It was driving me crazy. Some people were even taking the straws out of their wrappers and discarding them without using them," Verge said. She questioned why straws were automatically served with cold drinks, smoothies and shakes on her property, a favorite destination for Bangkok families with young children. The issue was especially troubling for Verge, a self-described 1970s child who was environmentally aware at an early age and frequently attended protests with her activist mother.

She discovered a campaign called "Skip the Straw" online and implemented it in June 2016 by ceasing to provide straws automatically at her resort. A few guests praised the initiative, but the majority of parents on holiday at Dolphin Bay still requested straws for young children. The Verges have had more success reducing straw consumption in their Bangkok restaurant, Cafe Tartine.

"From June 10, 2016, to Feb. 1, 2017, we saved over 6.7km of straws here," Verge said, speaking in an interview on the terrace of Cafe Tartine, where straws are no longer served automatically with drinks. To calculate the impact of the program, the length of the straws used is multiplied by the number of relevant drinks sold. "My staff are very proud, and customers comment daily on the initiative," she added.

Back at Dolphin Bay, the "Skip the Straw" policy remains in place. Other measures include daily litter patrols along the beach and a monthly visit by staff to a nearby tourist island to haul away refuse. Guests are also encouraged to participate: Anyone who picks up litter is treated to free ice cream, a sweet incentive for young and old alike.