In the realm of the Mongolian eagle hunters Kazakhs take eagles into their homes, where they become as close as family members, according to a book from photographer Palani Mohan. (Photo by Palani Mohan, from his book “Hunting with Eagles: In the Realm of the Mongolian Kazakhs”)
RON GLUCKMAN, Contributing writerNovember 3, 2015 15:00 JST | China
CopyCopied

"Only the toughest survive here," writes photojournalist Palani Mohan in the introduction to his extraordinary photography book, "Hunting with Eagles: In the Realm of the Mongolian Kazakhs." His reference is to hardy Kazakh tribesmen of westernmost Mongolia, who brave sub-zero temperatures to hunt in the ancient manner, using eagles. But he could easily be including those -- such as himself -- who try to document the intriguing practice. 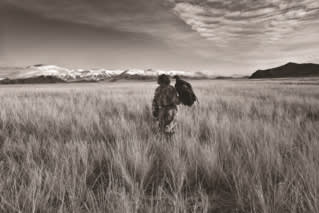 In the vast landscapes of westernmost Mongolia, Kazakh hunters are all alone with their eagles. (Photo by Palani Mohan, from his book “Hunting with Eagles: In the Realm of the Mongolian Kazakhs”)

Mohan, 48, was born in India, raised in Australia and is now based in Hong Kong. His past books include "Vivid Hong Kong," "Hidden Faces of India," and perhaps the definitive study on Asia's largest and best-loved animal, "Vanishing Giants: Elephants of Asia." His pictures also run in such publications as National Geographic, Time magazine and Stern.

His latest project challenged not only his photographic skills but his very endurance. Kazakhs are a scattered people, with about 16 million mainly living in Kazakhstan, but also in parts of China, Central Asia and westernmost Mongolia. The last, he explains, is a stunningly beautiful but inhospitable land, with few roads or modern conveniences. The old-fashioned eagle hunters dwell far off the grid, amid expansive landscapes of grassland framed by snowy peaks, surrounded only by their families, their livestock that sustains them, and the majestic birds that are so much of their heritage. Off to hunt; a procession of proud Kazakhs with their eagles. The traditional method of hunting is dying out as younger generations eschew the old ways. (Photo by Palani Mohan, from his book “Hunting with Eagles: In the Realm of the Mongolian Kazakhs”)

Falconry is celebrated from across the Asian steppes to as far afield as the Persian Gulf and Morocco. Genghis Kahn was an avid fan, and as he conquered the globe, likely helped propagate the practice. Historians believe falconry originated in this very region thousands of years before, perhaps as early as 4000 B.C. Scenes on shards of ancient Central Asian pottery depict falconry as a royal custom, and paintings from the Tang Dynasty show it spread to the Imperial court in China. Much later it became a passion in Europe and the Middle East, spurred by the Mongol conquests and the crusades.

Mohan's book (Merrell Publishers) not only details the colorful traditions among eagle hunters in western Mongolia, but his own personal crusade to document the practice. Others have covered eagle hunting among Mongolia's Kazakhs as well as in China's Xinjiang Province, but few have so passionately detailed the intimate connection between hunter and bird, man and landscape, and, ultimately, photographer and his fascinating subjects.

Mohan's lush prints are exquisitely presented in stark black and white duotone, a process that overlays the monochromatic images with another in gray. The resulting pictures are sharp in detail, yet look atmospherically aged, as if from a history book. Most compelling are his portraits, depicting proud, fur-swathed Kazakhs posing with regal birds. Mohan also presents a rich panorama of landscapes from many angles, along with wonderfully varied scenes of the craggy hunters with their families and the livestock -- a comprehensive picture of life in this rugged region. Eagles are captured as young birds at around four years of age, fed and trained, then taken to the field for 10-15 years, but eventually set free into the wild. (Photo by Palani Mohan, from his book “Hunting with Eagles: In the Realm of the Mongolian Kazakhs”)

Mohan spent several years on the project, repeatedly braving bracing temperatures to visit the same group of hunters in western Mongolia. Simply getting there required fortitude; photographing the project not only tested his grit, but even his equipment. He describes it as the culmination of a quest that began decades ago.

Mohan first saw pictures of the hunters while a 17-year-old newspaper photographer in Australia. Later, his interest was heightened by images of hunters at a festival held each summer in Olgii, the capital of Bayan-Olgii Province in the far west of Mongolia. Thus was planted the seed of the book. "I didn't just want to show up at the festival. I wanted to follow them around," he explained. "I wanted to really soak up a sense of their lives, spend time in their homes, get close to them."

The project took him far outside any comfort zone. Hunting traditionally takes place in winter. That is when the favored prey, the corsac fox, with its distinctive reddish fur, stands out against the fresh snow.

"This was one of the hardest things I've ever photographed due to the cold," he recalls. "I slept with the batteries under my armpits in bed to try and keep them warm," he says. "When I was working, I had on so many layers, it was hard to do anything. I've never photographed in such low temperatures; it was hard going." Covered in fur from head to toe, the Kazakh hunters brave bitterly cold Mongolian winters that regularly reach minus 40 C. (Photo by Palani Mohan, from his book “Hunting with Eagles: In the Realm of the Mongolian Kazakhs”)

Connecting with the nomadic hunters was another ordeal. "Traveling in that part of the world takes forever," says Mohan, chuckling at memories of the hardships, careening around in unheated old jeeps over terrain with no roads. "And when you get there, the people have already moved on!"

Eventually he connected with Orazkhan Shuinshi, an elder of a dwindling band of the traditional hunters. The book describes how younger generations have turned away from the daunting challenges of finding, feeding and training the eagles. Birds are taken at a few years of age, then hand-fed, helping to forge a bond that lasts through 10-15 years of hunting. After that, the eagles are released into the wild. "Every year, when I went back, more hunters were gone. I wanted to document them before they vanished."

He recounts his last visit: "As I was saying goodbye to my friend Orazkhan, he took my hand, wished me a safe journey, and said, 'It was good to see you again. It will be my last time, I think, as the next winter will get me.'" This book provides a rare look at the intriguing Kazakh eagle hunters and, in its own way, tries to ensure that their legacy will live on.