BANGALORE At a cafe in Bangalore's central district, artist Pavithra Chowdappa doodles on canvas with a marker labeled AIR-INK.

"This is a special marker," she says, making black strokes across the white surface. "It's the only environmentally friendly ink around. And it's so smooth, and nice -- in fact, better than many others in the market -- that one can hardly guess it's sourced from air pollution."

The ink is made from airborne particles using a process invented by Anirudh Sharma, 30, an Indian graduate of the Massachusetts Institute of Technology in the U.S. The process involves capturing particulate matter from vehicles and diesel generators using a proprietary tool created by Sharma's Bangalore-based startup, Graviky Labs. The tool, called Kaalink, is a retrofit device that can be attached to exhaust pipes and diesel generators. "Kaalink" is a play on kaali, which means black in Hindi.

"At first, the inks were all alcohol-based. Now organic solvents are being used instead, making the inks even better," said Pavithra, whose paintings are sold under her first name only. She provides the Graviky Labs team with feedback on ink properties, and works for the company in communications.

In early October, artworks by Pavithra executed in AIR-INK were exhibited at a weeklong art, environment and sustainability festival in Bangalore, accompanied by a live demonstration of the process of converting soot to ink, which Graviky Labs is seeking to bring into mass production. AIR-INK products are not yet publicly available, but can be pre-ordered on the company's website. "It is expensive, yes, but then expensive is also a relative term," said Sharma, who claims that using about 30 milliliters of AIR-INK "can negate 45 minutes' worth of pollution," although the rate of ink production from air varies.

Graviky Labs is planning to install about 1,000 pollution capture units in New Delhi, where it will pilot Kaalink early next year, beginning with diesel power generators, a major source of air pollution. "Diesel generators are more polluting than cars," Sharma said. In the next phase, Kaalink will be launched for use on cars, buses and taxi fleets.

India is one of the most polluted places in the world, with the highest number of deaths annually due to respiratory diseases. The death toll in part reflects India's large population, but a Greenpeace study published in 2016 showed that the average Indian was exposed to more particulate pollution than the average resident of China in 2015.

New Delhi, Sharma's hometown, is among the country's worst polluted cities. In November 2016, the city's air pollution levels rose to 16 times the officially determined "safe" limit, prompting the government to declare an emergency and close schools for three days.

Sharma, a self-described "chronic inventor," was inspired by a conversation with friends four years ago in which they complained about air pollution staining their clothes. He suddenly saw pollution as a resource. "Carbon, if you recycle, can be gold," he said.

SOOT NOTES "I'm constantly looking for ideas," said Sharma, who was named "innovator-in-chief" in 2016 by Forbes magazine in its "30 under 30" list. This year, Graviky Labs won the "Make the Future" award for the most disruptive startup in India, given by Shell. Sharma dropped out of an engineering college in India in 2009 to build interactive displays commercially. "I am more interested in finding solutions," said Sharma, who added that India offers endless opportunities. 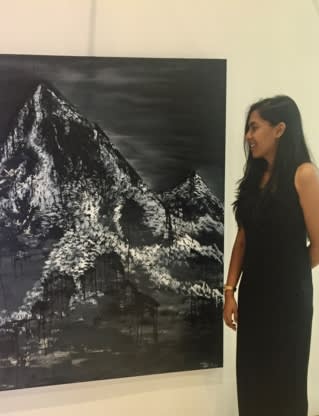 Artist Pavithra Chowdappa with an AIR-INK artwork from a series called "Minutes in Mountains" at an exhibition in Bangalore in early October. The ink used in the artwork represents 130 minutes worth of air pollution. (Courtesy of Pavithra Chowdappa)

Sharma went on to do a master's degree and a doctorate at MIT, having made a name in Bangalore in 2010 as the creator of the world's first GPS-connected interactive haptic shoes, designed to provide a sense of touch for visually challenged wearers.

In 2011, he co-founded Ducere Technologies to produce the shoes under the brand Lechal. "I am not much of a businessman," he said. "But I had to set up this company after I got several requests from people who wanted [them]." Today the Hyderabad-based company employs more than 100 people.

Graviky Labs has so far been able to purify 1.6 trillion liters of air, harvesting 770 liters of ink, and claims to be financially sustainable. It plans to introduce colors, and to launch ink for the printing industry. "This should make a big impact given that the printing industry is huge," Sharma said. "Printer's ink is one of the first we had made, but we did not proceed with it right away. Given the nature of the printing industry, entering it is a slow process. We are taking our time."

For now, artists have given AIR-INK the thumbs up. "My requirements for good ink are that it is opaque, has good consistency and dries [quickly]," said Hong Kong-based artist and graphic designer Cath Love. "The ink ticked all requirements, and it's pretty cool that they needn't source raw materials to make it."

Love participated in an art workshop in Hong Kong in August 2016 run by Graviky Labs and Tiger Beer, a unit of Asia Pacific Breweries Singapore, in which local artists created street murals with 150 liters of AIR-INK derived from 2,500 hours of pollution.

Kristopher Ho, another Hong Kong-based illustrator and artist who participated in the event, also praised AIR-INK. "The ink is solid black, and relatively thick compared with other types of inks in the market, which makes it ideal to paint on porous surfaces, since it fills up the tiny pores and gaps," he said.

However, Ho said the environmental impact of using the ink is a more important benefit. He said artists often end up creating waste, which many are keen to minimize. "The wonder of having a material that is generated from our everyday waste is that it can be a good start to raise awareness of pollution problems around the world," he said.