An indoor cemetery with LED lighting in Nagoya, Japan

For Hidehiro Konno, it was a matter of life and death.

The maternity hospital he operates in Urayasu, just outside of Tokyo, has been caring for mothers and babies for more than 40 years and handles some 600 births a year. But in April, an apartment building next door was torn down, and the chief priest from a local Buddhist temple came to tell Konno what was going up in its place: an indoor cemetery.

Konno protested. What would pregnant women think when they saw a place associated with death standing right next to the hospital? But the priest said the facility, which will store urns containing cremated ashes, is legal.

Konno's attempts to block the plan failed and he is now planning to relocate the clinic.

Indoor cemeteries like this are becoming increasingly popular in Japan, where space for new graves is at a premium, but they are not covered by current regulations on cemeteries, meaning situations like Konno's are set to become more common.

GRAVE SHORTAGE The total number of indoor cemeteries in Japan has remained steady in recent years, totaling about 12,000 in the year ended March 2016. But the combined number for the Tokyo area, including three adjacent prefectures, and Kyoto, Osaka and Hyogo prefectures increased 32% in 10 years to 1,386 in 2015.

Given Japan's rapidly aging society and increasing numbers of deaths, the number of such cemeteries is bound to go up. In 2016, total deaths exceeded 1.3 million for the first time since the end of World War II. That figure is projected to rise to 1.68 million in 2040.

Local governments currently regulate the construction and operation of graveyards, mausoleums and crematoriums based on guidelines drawn up by the national government in 2000.

The problem is, those guidelines were created at a time when most ashes were entombed in graveyards. They specify criteria for setting up graveyards and associated buildings but make little mention of buildings for housing urns containing ashes.

Urayasu's regulations, established in 2001, contain a provision that anyone wishing to build a cemetery generally must obtain permission from adjacent residents, but the provision does not include mausoleums, according to a municipal government official. 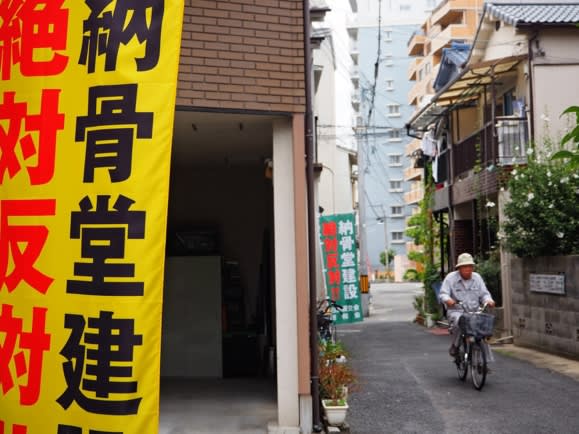 Residents in Osaka have filed a lawsuit to block the construction of an indoor cemetery in their neighborhood.

In May, Konno's clinic submitted a petition to the municipal government in hopes of blocking the planned indoor cemetery. The petition was signed by 7,000 people, including patients, but the government replied in August that it cannot stop the plan.

To avoid similar trouble in the future, however, the Urayasu government on Sept. 15 published a draft bill aimed at revising the regulations to include requirements for building indoor cemeteries.

UNPOPULAR ADDITIONS The typical indoor cemetery in urban areas is a concrete building where urns are stored and brought by an automated system to a visitors' area. Such facilities can hold several thousand urns despite only taking up as much land as a single house. This makes them ideal for cities, where large tracts of land are often hard to come by. Residential areas are especially popular sites for operators looking to build new indoor cemeteries -- much to the annoyance of those living nearby.

In the city of Osaka, 10 residents have filed a lawsuit demanding the municipal government retract the permission it had granted for an indoor cemetery to be operated in their neighborhood. The facility is to be built on a vacant lot measuring about 600 sq. meters. According to the lawsuit, it will be a six-story building housing about 6,000 urns.

One of the plaintiffs, the owner of an adjacent building, said: "This was a lot where an private home stood, but the entity planning to construct the facility is a religious corporation from out of town. It's not related in any way to the community, and it's unacceptable."