Jean-Claude Trichet (11): A president's esprit and lessons on European integration

I became an economic adviser to Minister of Economy Rene Monory in April of 1978. Prime Minister Raymond Barre was calling for economic liberalization, with the full support of the president, and Monory was convinced that all official pricing had to go. I greatly sympathized with the idea that France should end its excessive regulations, where even the price of a loaf of bread was still set by the government, and instead leave pricing up to the market.

France's immediate response to the first oil shock (1973-1974) was unfortunately to put the burden of the adjustment on businesses and to protect household revenues as much as possible. The result was a significant weakening of the productive sector. Prime Minister Barre then reversed the policy, aiming to help companies regain their competitiveness and balance the public accounts.

One of a kind

Negotiating the active restructuring of troubled companies was a good introduction for important responsibilities in microeconomics. In July, after only three months with Monory, the secretary general of the presidency proposed that I come to the Elysee Palace, the official residence of the president. I was appointed adviser to President Giscard d'Estaing. I spent three years advising him on microeconomics, energy, industry and research -- areas under the jurisdiction of five different cabinet ministers.

Energy issues were very important at that time, as they are still today. I remember coining the phrase "sober growth" (croissance sobre) to convey the idea of the necessity of achieving real significant growth while minimizing oil consumption. The president liked the term and used it, for the first time, in an interview with a Japanese newspaper, preparing for the 1979 summit in Tokyo. During these years, a lot of measures were decided to diversify energy savings by all possible means.

As a presidential adviser, I spent three busy years until 1981, working from just after 8:00 in the morning and returning home no earlier than 8:30 at night, six days a week. 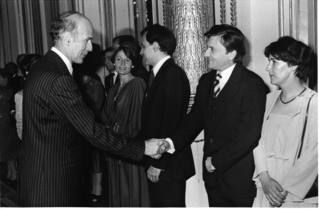 At a reception hosted by President Giscard d'Estaing in May 1981. I served as an adviser at Elysee Palace for three years. (Courtesy of Presidency of the Republic of France)

As an adviser, I was deeply engaged in various efforts to strengthen France's industrial competitiveness, including restructuring the steel industries in the north of France and in Lorraine; helping equip France with nuclear power plants as a response to the oil shocks; modernizing telecommunications; and developing the aerospace industry.

It was the start of the commercial success of Airbus and the moment of the first successful launch of the Ariane rocket. I supported as much as possible the Airbus venture, which was not yet a company but a simple association of French, German and British companies. The president was asking to support such technological programs, provided they were credible and designed for the global market with a real chance of success, to avoid repeating the mistakes of the Concorde plane.

For his office at the Elysee Palace, Giscard d'Estaing selected a room that was more modest than the office occupied by his predecessors de Gaulle and Pompidou. With windows on the south and east sides, it was luminous and comfortable.

His ability to remember things was beyond compare. He could recall in detail conversations he had with people the week before, the month before, and, quite often, years before!

The president also had amazing intellectual curiosity and esprit. I recall the time I delivered to him a draft of a speech he was to give on computers. He said, "It's good for the most part, but I'm disappointed it does not address the important question of whether artificial intelligence is of the same nature as human intelligence." I dutifully added a passage saying that the two were totally different. He threw it back at me, saying, "The human brain is made up of neurons and synapses that are following the laws of nature, so the two intelligences should be closer than you think." I was at a total loss.

I asked my wife, who was working as a translator for the Ministry of Foreign Affairs, to remind me the origins of the word "intelligence" in Latin, according to her dictionary. Her response was eye-opening. The etymology she gave me, with such examples as "to choose between," "to discern," "to sort out," "to arrange," showed all the terms used to talk about computers. In French, computers are called ordinateurs, after the word ordonner (to arrange). I wrote a memo with a list of 10 origins of "intelligence," and the president improvised, using this etymology during his speech to support the idea that artificial intelligence should not be underestimated.

Once, when we were driving to a venue where the president was going to deliver a speech for entrepreneurs, he pretended to read my memo, saying loudly and solemnly: "The president will find here the remarkable address that I have prepared for him." "Remarkable? Really?" he asked. I was taken aback, asking myself how such a lapsus calami could have appeared in my text. But he was just joking. Rare for a French politician, Giscard d'Estaing had a real sense of humor.

The president had a close relationship with Mr. Helmut Schmidt, the chancellor of the Federal Republic of Germany at that time, and their warm relations and mutual confidence paved the way for the first summit of major industrial powers in Rambouillet in 1975. The following year, they also created together the first periodic meeting of the heads of Europe, called the European Council. My service for the Elysee Palace was where my links to the goal of European integration were forged.