In May of 1981, Francois Mitterrand of the Socialist Party won the presidential election and I returned to the Finance Ministry from my post as presidential adviser. I was appointed chief of the Official Development Assistance (ODA) bureau, with a deputy chief and one assistant. Before that change, only two people worked above me -- the president and the secretary general of the presidency. Now, I had just two people working under me!

One year later, I became deputy assistant secretary for international finance. Back then, terrorism was not a security issue. Thousands of people came for the annual IMF and World Bank meetings in Washington without special protection, and the hotels were jam-packed.

I participated in many negotiations over financial protocols, agreements and treaties all over the world, especially in Asia, Latin America and Africa. In 1982-1983, I negotiated a treaty with China to enhance and protect bilateral investment. My negotiating partner asked me, "Could you elaborate on exactly how stock exchanges work?" He continued: "We would like to fully understand the way the capitalist economies function and, as far as China is concerned, we consider that all experiences by other countries are welcome at our stage of development."

I was impressed by this open-minded thinking in a communist country, where all the people were still riding bicycles in blue Mao suits. It was so different from my experiences in Moscow.

In 1982 I became one of the deputies to Michel Camdessus, the chairman of the Paris Club. And in 1985 I became the chairman myself. 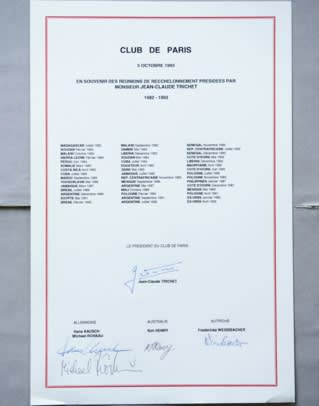 This document, presented to me in 1993 when I stepped down as chairman of the Paris Club, lists all the debt-rescheduling negotiations I chaired.

The Paris Club is an informal group of representatives from creditor nations that decides whether to help debtor nations that have trouble paying back their loans. This assistance entails rescheduling the repayments and alleviating their debt burdens, provided they embark on credible adjustment programs. One rule of the Paris Club is that all participating creditor nations be treated equally and take the same measures.

There was a lot of wheeling and dealing. One amazing experience was negotiating with Cuba's leader Fidel Castro.

In 1982 I was involved in negotiations led by the five largest creditor nations -- Japan, Sweden, Italy, Spain and France -- to reschedule the Caribbean country's debt. We had to make a judgment on economic reform as a condition for such relief, but the Cuban government would not give us access to any of its economic data. I warned its finance minister that "rescheduling your debt would then be impossible." A few days later, he said: "Come and meet the president."

Castro said that because he could not trust any parties close with the U.S., Cuba would not give any information to the negotiating team. I responded by insisting that without information there could be no progress. Castro finally said, "OK, we'll release the figures." He went on to say: "I never lie, neither to the people, to my friends nor to hostile countries."

The extraordinary fascination that Castro exerted on the members of his government, including his vice president and all the ministers concerned, was palpable during this six-hour discussion. The atmosphere of the meeting was best summed up by my Spanish colleague, who said: "I saw a living pharaoh!"

Last days of the USSR

I also met with Mikhail Gorbachev, the last president of the Soviet Union. The country had fallen behind on repaying its sovereign debt. It was a cold day, just before the collapse of the USSR, in December of 1991.

Gorbachev was still an iconic figure and nearly 100 TV cameras from around the world were set up when we arrived at the Kremlin. At the start of the negotiations, I, as chairman of the Paris Club, said: "Mr. President, the Soviet Union does not honor its commitments. This is an extraordinary situation. We need guarantees that the Soviet Union's debts will be repaid."

Gorbachev simply said, "I hope your negotiations go well," then added: "If you have problems with any of the republics, please tell me. I'll call the prime ministers and lend you a hand."

He behaved as if he still were the master of the Soviet Union. But immediately afterward, I was told by his negotiator: "The USSR no longer exists! Negotiate with Russia. Check with Ukraine, and present the results to other republics." It was a surreal situation when we were demanding debt repayment by a reluctant Soviet Union claiming it no longer existed.

Between Madagascar in 1982 and the former Soviet Union in 1993, I presided over a total of 45 rescheduling negotiations for countries with debt problems, mainly in Latin America, Africa and Eastern Europe.

Swollen by the rising price of crude oil, enormous amounts of petrodollars were pouring into developing countries at low interest rates, contributing to irresponsible economic policies and excessive debt. Mistakes invariably arise from too-easy money. That is a common lesson of the 1970s, the 1980s and even of the 2007-2008 crisis.