Having focused on international financial issues and European integration as deputy and later head of international affairs at the French Treasury from 1981 to early 1986, I was back to taking charge of domestic economic policy. In March of 1986, I was appointed chief of staff for Finance Minister Edouard Balladur.

After the Bretton Woods system of fixed exchange rates collapsed, Giscard d'Estaing and Helmut Schmidt led European efforts to introduce in 1979 the Exchange Rate Mechanism (ERM), a system designed to keep exchange fluctuations among the region's currencies within a set range. In 1980, France had a budget surplus but consumer price inflation was much too high, nearly double the rate in Germany. Our goal was to foster progressive disinflation by more solidly anchoring the French currency.

Socialist Party leader Francois Mitterrand became president in 1981 and his first move was a grave mistake. It was time to preserve corporate competitiveness, reinforce the production sector, consolidate public finances and pursue a disinflationary policy.

The new administration pursued the opposite course: boosting public spending, not caring about inflation, and nationalizing all domestic banks and the majority of big industries. Under the ERM, the franc was devalued relative to the deutsche mark on three successive occasions: in October 1981, June 1982, and March 1983.

President Mitterrand was a sophisticated, experienced politician with a deep knowledge of history, philosophy and, above all, literature. He could effortlessly forge confident relations with people with completely different sensitivities, including those on the extreme left and right. But he was not trained as an economist.

In 1983, President Mitterrand decided on a bold U-turn in economic policy. Laurent Fabius -- the current Foreign Minister -- played an important role in this change. Looking to support European integration and re-establish healthy fiscal and monetary policies, Mitterrand entrusted the main task of economic reform to Finance Minister Jacques Delors, who had been loyal but deeply unsatisfied with the president's first course of action. That marked the start of rebuilding confidence in the franc. 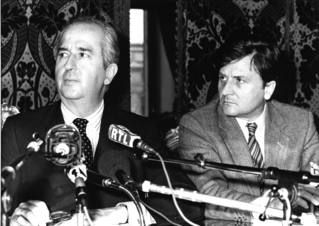 At a press conference with Finance Minister Edouard Balladur, left, in May 1986. Many people called me the "Ayatollah of the strong franc."

The budget deficit and inflation did improve gradually. But the fantastic promises of the presidential election -- "changer la vie," or changing life -- were too unrealistic to be fulfilled. The conservatives won the general election in 1986. That led to the birth of the "cohabitation" government, with a socialist president and a conservative prime minister in the form of Jacques Chirac.

A few weeks after the new government took charge, on April 6, 1986, the franc was realigned again in the ERM. Having seen French competitiveness decline despite the switch in President Mitterrand's policy, Prime Minister Chirac and Finance Minister Balladur were convinced that a final devaluation was necessary to put the economy on the right track.

Even so, without appropriate adjustment and reform measures, devaluing a currency is meaningless because it only leads to further economic deterioration and new devaluations.

My job was to draw up a reform plan for the French economy that would combine sharply curbing unit labor costs, boldly reducing public spending and pursuing structural reforms in every area, including privatization.

The negotiations that led to the devaluation of the franc within the ERM were conducted by the minister of finance and the governor of Banque de France, and were prepared by a previous governor of Banque de France, Renaud de la Geniere. Let me stress that France was not forced, either by Europe or by Germany, to carry out reform but did so on her own initiative to regain competitiveness and succeed in the fight against unemployment.

That should have been the end of currency realignment for the franc, but unfortunately the currency was devalued again in January 1987. And that was the final round. It is important to note that, starting from President Mitterrand's U-turn in 1983 up to the start of the euro in 1999, the core French strategy of "competitive disinflation" was pursued by both the conservatives and the socialists.

I was constantly a very strong advocate of this bipartisan strategy aimed at moderating costs in the economy, preserving and reinforcing competitiveness, therefore fighting effectively against unemployment and, ultimately, eliminating the interest-rate gap between French and German government bonds as a result of the renewed confidence in the franc.

This strategy was summed up in the expression "Franc fort." The strong franc policy was pursued for an 18-year period through 1999, particularly by two great finance ministers -- Edouard Balladur and Pierre Beregovoy -- who both became prime minister, and by all governments, whether socialist or conservative.

During that period, I was often called the "Ayatollah of the strong franc!" By "strong franc policy" I always meant the strategy designed to attain a currency that was not only nominally strong in the ERM, but also as competitive as possible in real terms, by promoting cost moderation and structural reforms.