Jean-Claude Trichet (15): Sleepless nights and the defense of the franc

In September of 1992, a wave of assaults hit the Exchange Rate Mechanism, a system in place to secure stability among European currencies. As the director of the French Treasury, I put my life on the line, so to speak, to preserve the stability of the French franc. I did so because the franc's stability was vital not only to the French strategy of "competitive disinflation," but also to the historical endeavor to create a single European currency.

The disparity between East and West in the unified Germany of 1990 was considerable. The German economy as a whole boomed thanks to huge subsidies and capital transfers for the benefit of the East.

But consumer prices soared by 5.75% in 1991, compared to 3.2% in France. In response, the Bundesbank repeatedly raised interest rates, pushing up the Deutschmark's value.

The ERM was intended to keep the exchange rates of the member currencies within narrow, set ranges. Governments, through their handling of structural and macro policies, and central banks, through their monetary policy, had to seek to achieve the goal. Interventions in the forex market to keep this commitment were part of the ERM agreement.

But divergences in their macro policies -- not least because of German reunification -- created market suspicions about the member-states' ability to fulfill their commitments. Not surprisingly, the deepest suspicion was directed at the lira, the currency that appeared to be the most vulnerable. This triggered large amounts of interventions.

Fourteen years earlier, in a letter sent to Chancelor Schmidt, Bundesbank President Otmar Emminger had stressed that under certain circumstances, the bank might not be able to supply unlimited amounts of Deutschmarks to other central banks. The 1992 market turmoil was the first time when the German central bank concluded that such circumstances became reality.

As a result, Germany asked Italy to accept a realignment. The situation was so urgent that I -- as president of the European Monetary Committee, the grouping of vice governors of central banks and vice ministers of finance in Europe -- called for an emergency teleconference during the weekend of Sept. 12-13.

During these two days, multiple consultations took place between European governments. In particular, Italy called on the U.K. to devalue the pound in concert with the lira. London refused. France made it clear that, in line with its overall economic strategy, it would not accept any realignment of the franc.

Eventually, the governments agreed to devalue the lira by 3.5% and revalue other currencies by the same margin. This was made public on Sunday, Sept. 13. The market participants were extraordinarily nervous after this development, ahead of the key referendum in France on the Maastricht Treaty, due for the following Sunday.

Simultaneously, the pound was attacked. Despite a fierce defense by the British Treasury and Bank of England, the sterling was forced to float. On Sept. 16, the day known as Black Wednesday, the sterling pulled out of the ERM, followed by the lira the next day. George Soros, the well-known financier and philanthropist, claimed at the time that he had earned $1 billion by attacking the BOE!

Then speculators turned to the franc, which was seen as the next weakest major currency after the lira and the pound. Some remarks made by French government officials, ahead of the referendum on the Maastricht Treaty, were not helpful: They suggested that a yes vote would bring a significant fall in interest rates, reinforcing in the eyes of speculators the supposed weakness of the French currency.

The French referendum supported ratification of the Maastricht Treaty by a slim margin, 51% to 49%. But that triggered renewed attacks on the franc. This put not only the French macro strategy in jeopardy but also the keystone of the single currency project. Unraveling stable exchange rates between the German and French currencies could have a devastating impact on the goal of creating a single European currency. I was strongly determined to prevent such a consequence.

At that time, as head of the French Treasury, I was in Washington, D.C., for the annual meeting of the International Monetary Fund. The French government called on me to engage in close consultation with German officials on Tuesday, Sept. 22, to seek ways to stabilize the franc-mark parity.

Finance Minister Michel Sapin and Bank of France Gov. Jacques de Larosiere were already on their way back to Paris, so there were just three people at the negotiating table for France: myself, a senior Banque de France official and a vice director of the Treasury. The German side was more numerous, including Finance Minister Theo Waigel, Vice Minister Koehler and Bundesbank President Schlesinger. Two members of the central bank's Directorate were also present: Vice President Tietmeyer and Issing.  Although Mr. Waigel was very courteous all through the discussions, the European situation was so stormy that our negotiations were tense from the start.

Mr. Schlesinger spoke forcefully: "I will not sign any joint statement that maintains the franc's parity with the Deutschmark. As a central bank, that would be irresponsible. If I were you, I would devalue the franc."

I responded that I was in total disagreement. "The alliance between France and Germany is the bedrock of European integration. What was said would destroy that foundation," I told Mr. Waigel. I then went on to explain that France's disinflation policy helped the country significantly improve its competitiveness vis a vis Germany since the franc's last devaluation in January 1987. The French government and central bank were determined to resist market pressure and defend the franc's value by all appropriate means, I continued.

Then there was a debate within the directorate of the Bundesbank: Mr. Schlesinger, Mr. Tietmeyer and Mr. Issing. Intuitively, I understood that it was a close call. And that's it: A Tietmeyer-Issing majority decided in favor of stabilizing the exchange rates. The heart-pounding atmosphere relaxed and we agreed to make a joint statement. 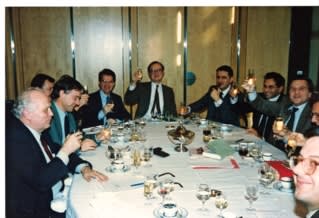 Though negotiations were tough, we built a strong sense of camaraderie with Germany counterparts. A photo taken in Paris around 1991.

The document, published simultaneously in Frankfurt, Bonn and Paris by the two central banks and the two governments, said the Bank of France would raise interest rates on Sept. 23, and that France and Germany decided on interventions to maintain the franc-mark parity.

I will always be grateful to Theo Waigel, Horst Koehler, Hans Tietmeyer and Otmar Issing, in particular, for their decision during this highly charged negotiation. The market's attack continued for a while. I did not sleep much during those days. But we showed market participants that attacking the franc was a losing battle. It was difficult, but we beat the speculators.