It was not until much later that my work took me around the world, but even as a youngster I had many chances to visit other countries. 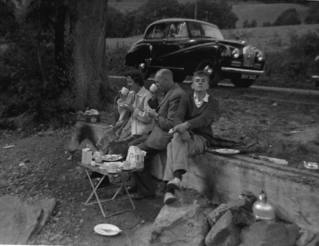 Taken at the Loch Ness with my host family in Britain at age of around 14.

When I was 14, I did a homestay for a month with a British family close to Newcastle-upon-Tyne. Their son stayed with my family, so it was a "student exchange." By the time I was 20 I had visited seven countries in Europe: Austria, Germany, Italy, Spain, Belgium, the Netherlands and the U.K.

Nancy is the ancient capital of Lorraine, which was divided along French-speaking and German-speaking lines after the Franco-Prussian War of 1870 and reunified after World War I. The region produced coal, iron ore and steel.

At the root of the European integration was the idea of collective management of coal and steel, which are the core materials for producing guns, tanks and heavy weapons. The sharing of risks and profits of these ventures -- proposed by French Foreign Minister Robert Schuman -- was the very first move paving the way to peace and stabilization through European integration: the European Coal and Steel Community was established in 1951 by the Treaty of Paris. I was 14 when, going forward, six countries signed the Treaty of Rome, creating the Common Market, in March 1957. Through my exchanges, I became more and more aware of the idea of European integration.

While I was in the Ecole des Mines, I joined a political party called the Parti Socialiste Unifie. With the iconic figure of Pierre Mendes-France, who served as prime minister under the French Fourth Republic, the PSU was a very diverse, left-leaning party that sought to introduce sounder economic policies.

Society must change and modernize for the benefit of all, not forgetting the poor and those experiencing difficulties. I felt sympathy for this conviction of the left. I was a party member for around two years. I quit the party because I felt very uneasy with sectarian fighting inside the party. I never belonged to a political party before and I have never belonged to one since.

I mentioned previously that I had on-the-job training at a steel mill in the U.S. It was 1962, and it was a factory operated by Florida Steel Cooperation in Tampa. I'd like to talk about that first impression of the U.S.

Racial segregation was supposed to have been abolished, but the reality was different in Florida. I was amazed to see that there were separate bathrooms for blacks and whites at the factory, and on the buses, the blacks were all going to the back and did not interact with the white riders in the front. It was completely different from what I knew in France. As already mentioned, Leopold Senghor was a close friend of my father.

After the end of my training in Tampa, I went to Miami and then headed for Washington, D.C., by bus. To save money I planned to stay at the YMCA in Washington, and it turned out there were two distinct accommodation facilities, one for white men and another for black people. So I discovered that even in the capital of the United States, which was supposed to have put an end to racial discrimination, the actual situation was different.

But in many other ways, the U.S. was also an extraordinary country in the eyes of a 19-year-old. Whereas in France the cars were small and painted in drab black and gray, in the U.S. the cars that drove the roads were all large and colorful, in yellows, reds and other bright colors. Color televisions were the norm, and air conditioners, which I had never seen before, were everywhere.

I was much impressed by the verticality of Manhattan and I was taken by the beauty of the monuments in Washington, which looked like the capital of a new Roman Empire. It was the year before the assassination of President Kennedy. America was vibrant, young and on the rise.

There was light and shadow, with lingering discrimination in the background. I brought back strong impressions of the U.S. It amazes me how much change for the best the U.S. has accomplished in half a century, with President Barack Obama, a black man, now leading the country.