Upon graduating from Ecole des Mines I began a double life, working part-time to earn money while attending university. After my father died, my mother managed to support herself with a small pension and through her work as a stenographer. I wanted to start working as soon as possible so I would not be a burden to my mother. It was 1964 and I was 21.

I took a job at a firm called Research Company for Economic and Social Development, wanting to use my math skills for economics-related work. It was a company that conducted economic analysis on behalf of state agencies, private corporations and foreign governments.

I used economic models to study the relationships between various economic sectors in France and estimate the kinds of new jobs that could be created in the different service sectors. I also analyzed the import and export trends of a number of sub-Saharan African economies. In more exotic areas, I explored ways to optimize livestock ranching, using mathematical models. They were all interesting tasks and ultimately of benefit to me.

Nearly 120 people were employed at the company. I worked in a very small room on the top floor of a building close to the Seine. That was just before the widespread use of computers. To compute my mathematical correlations, I used an Olivetti mechanical calculator. The machine would go chongchongchong and out would come the results.

The technology has advanced remarkably. I sometimes pinch myself and wonder whether I am living in a science fiction novel! Machines not even dreamed of 50 years ago now link the world at the speed of light and instantly perform an immense volume of computations on your behalf at practically no cost.

In January 1966 I earned 721 francs. That was equal to around $140 at the exchange rate at the time. They were meager earnings, but enough to live on.

In parallel with this job, I entered the Institut d'Etudes Politiques, known as Sciences Po, and spent two years studying economics. I also studied economics at the University of Paris. My company let me work flexible hours in the mornings and afternoons based on my class schedule, provided I did the job and delivered the studies in time.

It was not easy to pursue studies at Sciences Po and the University of Paris while earning a living. But I was strongly motivated: I wanted a thorough education in economics on top of my preparation for the Ecole Nationale d'Administration (ENA) exam. I was helped by the fact that economics was becoming more and more mathematics driven.

As a graduate in mathematics, the general equilibrium theories of Debreu and Arrow, and pursuing the works of Walras, Pareto and Allais, were very appealing intellectually. I was also fascinated by Keynes' ability to think outside the box. Schumpeter's bold views of the economy as a process of creation and destruction were fresh ideas for a French-educated person like myself. One of the teachers at Sciences Po in those days was Raymond Barre, who later became the prime minister of France.

But my main goal was to take the entrance exam for the ENA. In the old days in France, high-ranking civil servants were recruited through different exams depending on the administration that was in power. After World War II, a single school, the ENA, was established by President de Gaulle to train civil servants. It is a very young school, considering that the majority of the country's major schools were set up before or immediately after the French Revolution. 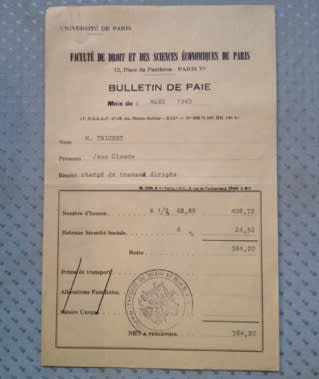 A pay stub for March 1965 from my job as a lecturer of mathematics and statistics in the Faculty of Law at the University of Paris.

I studied hard to meet this daunting challenge, sometimes concentrating from early in the morning to late at night inside the expansive but quiet Sciences Po library. My wife silently supported this lifestyle of mine.

Having studied mathematics and physics and considered embarking on a private-sector career in corporate business, I was now aiming to become a civil servant. I had always looked at all the possibilities available to me. Ultimately, I chose the one that over the subsequent three years would be the most interesting and stimulating.

I have the same advice for young people: "Think about what would be the most stimulating job you could do over the next several years. Keep your mind open to all possibilities. If you do that, you will amass more experiences in this relatively short span of time and open the door to an even more rewarding future."