Jean-Claude Trichet (9): My days at the Ecole Nationale d'Administration

I passed the exam to enter the Ecole Nationale d'Administration (ENA), receiving the eighth-highest score among those who took the test. It was January of 1969 and I was 26, with university studies in economics and 18 months of military service under my belt.

The exam was sophisticated and difficult, and has since been simplified and modernized. For a particular essay, astonishingly, I was tested like an 18th century gentleman of the Enlightenment, expected to write a dissertation that wove together elements of philosophy, literature and sociology. For the oral session, I was given 30 minutes to reflect on a topic and then asked to formulate a structured and clear exposition. My interviewers -- of which there were six or seven -- fired questions at me like arrows, and I was expected to reply intelligently to each of them.

The exam was taken by 1,000 people, and 99 French students managed to navigate the minefield. There were also 36 foreigners recruited on the basis of their resumes through a different selection process. Afterward, we all got together at a ski resort in the Pyrenees. I was asked to preside over the traditional session on choosing the name of the class. Through a vote, we decided to name our class after the British statesman Thomas More, who held out the idea of utopia. I think it was an excellent choice. We selected a fiercely independent foreign luminary for our name.

ENA students were immediately posted to a variety of prefectures inside France or to foreign diplomatic missions. Graduates become public servants the moment they enroll in the school, and earn the salary of a civil servant. While receiving a high-level education they also shoulder responsibility, gaining training in the field.

I spent a year in the prefecture of Caen in Basse-Normandie, conducting a variety of provincial duties as the outpost agency of the state. I even gave speeches on a number of occasions as the state representative. 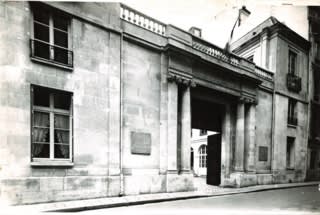 The entrance to the ENA when the school was still based in Paris. Then, as today, the graduate institute attracts France's best and brightest.

I wrote a 40-page report on how to renovate poor public housing inherited from the war period. This kind of housing was shoddy and had very little insulation. Condensation would develop indoors, making for a lousy living environment. I proposed various improvement policies, in particular, reorganizing the housing budget to concentrate on rehabilitation, and those policies were actually adopted by local governments.

My wife Aline and I lived apart at that time. She would come visit me on weekends or I would go visit her in Paris. I was used to cramped living spaces, so the residence in Caen felt enormous.

The ENA is now mainly located in Strasbourg, but back then it was in Paris. Having gained experience in the field, students attended lectures from professors and listened to talks from a diverse range of people working in government and at international institutions. The international bond market had been established at that time, and I was particularly interested in economics and finance. I also took courses on environmental problems, as there was an emerging awareness about environmental constraints.

It was then that I first had the opportunity to talk with Jacques Delors, one of the key architects of European integration. At the time, he was an adviser to Prime Minister Chaban-Delmas, and he worked to modernize France as part of the prime minister's "new society" program. Mr. Delors was an extraordinarily imaginative and extremely busy person.

At the ENA, we had exams almost every week and were told, on an ongoing basis, the evolution of our standings in the class. For these periodic exams, we generally had three hours to write an eight-page essay. In many fields related to public administration, we had to say what we would do if we were the responsible official and how we would explain those actions to the minister or the cabinet. Our final standing at graduation was very important because it determined whether we could join the government agency of our preference.

I ranked fifth on graduation, which permitted me to choose the administration I preferred. My choice was the Inspection Generale des Finances (General Inspection of Finance) in the Ministry of Finance.

At the ENA, students spontaneously formed groupe de travail -- voluntary groups of around 10 people who would help each other study and gather information. There were around 12 groups during my time there. It was a good idea for people to hone their skills together as part of a group, rather than fiercely compete against each other in isolation. I remember being given the nickname "Justix" by friends in the class, because they thought I was keen on justice.

Following the student riots of 1968, the French government toughened the laws and in 1970 imprisoned several demonstrators. The majority of my class at the ENA, myself included, signed a petition criticizing the government and demanding the release of the prisoners. We were calling for a more moderate approach to the challenges represented by those post-1968 revolutionnaires.

It was certainly paradoxical for ENA students to criticize the government, considering that we were studying to become high-level civil servants. This infuriated Georges Pompidou, the president of the republic at that time, and at one point he even considered closing the school.