A quarantine researcher inspects chicken at a poultry farm in Xiangyang in Hubei Province.   © Reuters

Asian demand for meat is expected to continue to grow strongly over the next decade, and investors hungry for double-digit returns are increasingly attracted by the potential opportunities. Asia's rapidly industrializing animal protein companies are seen as a smart play on the region's rising middle-class incomes, with Chinese meat and feed producers such as New Hope Group and Guangdong Wens Foodstuff Group now among the 10 largest animal feed manufacturers globally.

However, Asia's meat, seafood and dairy industries face a range of badly managed sustainability risks -- from emissions to epidemics, fraud to food safety, and from misuse of antibiotics to misuse of labor -- which have significant potential to derail returns.

In 2014 a reporter recorded undercover footage of meat that was beyond its expiry date being processed in a Shanghai factory that supplied global fast food chains, including U.S.-based McDonald's and KFC. The video went viral, leading to an official investigation and creating massive damage to the share prices of both McDonald's and Yum Brands, KFC's parent. In the three months following the scandal, the two companies recorded a combined drop in equity of more than $10.8 billion. Prison sentences were also given to employees involved in selling the expired meat to the market. Three years later, lessons do not appear to have been learned.

A new report from the Farm Animal Investment Risk and Return Initiative, a global network supported by investors managing more than $3 trillion in assets, finds that food safety remains a very high and immediate risk in Asia's meat, dairy and seafood sector. It cites several recent food scares, such as the case of dioxin-contaminated eggs in Taiwan. Dioxin is a well-known and highly toxic environmental pollutant.

Of particular concern is the increasing frequency and impact of livestock epidemics such as avian flu. The most recent strain of avian flu, the H7N9 strain in China, caused 291 human deaths in the four years to 2016, proving 84% more deadly than the earlier H5N1 strain (which killed 158 people in its first four years to 2006). This is a deeply worrying trend. Southeast Asia already has the highest incidence of foodborne illnesses of any global region -- with foodborne-related deaths surpassing 175,000 per year, according to the World Health Organization.

UNCHECKED ANTIBIOTICS Perhaps the most significant issue for investors is an alarming increase in antibiotic use projected for the Asian livestock sector.

The WHO has declared the rise of antibiotic resistance to be one of the biggest threats to global health -- yet Asia is set to increase the administration of antibiotics in its poultry and pork sectors by 129% and 124% respectively by 2030. This undermines global efforts by regulators, the U.N. and the investment community to tackle the rise of antibiotic-resistant superbugs. 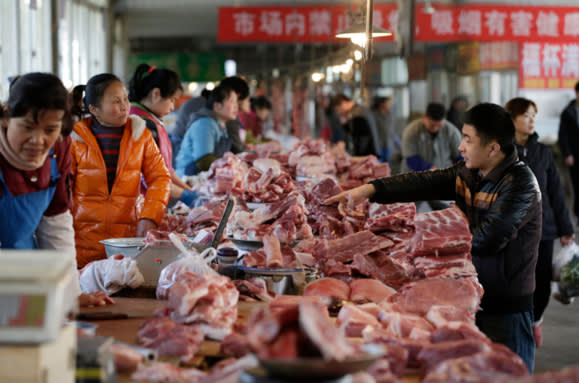 Meat stalls at a Beijing market: Sustainability is a major issue for China's protein producers.   © Reuters

Antibiotic usage is also increasing in Asian aquaculture. For example, a 2017 study on shrimp production in China found that 52% of tested samples contained antimicrobial residues, with 10% of these residues exceeding legal limits. The usage is also affecting trade markets. In 2016, the U.S. Food and Drug Administration reported a record year for refusals of Asian shrimp imports due to contamination with banned antibiotics.

In addition to public health risks, the boom in Asian intensive farms poses major environmental risks. Livestock production is highly water- and emissions-intensive. Beef and lamb have the highest greenhouse gas and water footprints of any protein source. Even chicken, the least carbon-intensive meat, generates 65 times more emissions per calorie produced than legumes.

Alongside the massive impact on water and greenhouse gas emissions it is estimated that China's surging demand for animal feed is sucking up approximately 35% of Brazil's soybean supply. Soybean production is a major contributor to the deforestation of the Amazon rainforest.

China has already shown a willingness for "polluter pays" legislation in agriculture. In 2016 a new tax aimed at enhancing the governance of water pollution and reducing wastewater emissions was introduced for larger farms and on a wider scale. A new carbon pricing scheme for China also looks likely to be introduced within the next year.

However, despite the significant environmental and social issues, Asian food producers are also showing the potential to innovate at a scale and pace that could make them leaders in sustainability solutions by the 2030s.

Launches of new vegetarian products in Southeast Asia increased by 140% between 2012-2016, while leading meat substitute producer Quorn, owned by Philippine food producer Monde Nissin, has reported unprecedented global sales growth of 19% in the first half of 2017. Given the prevalence of health and safety issues in the region, producers offering alternative sources of protein are well-positioned to expand their market share.

In Taiwan, for example, a startup called Healthy Living Biotechnology has used an unconventional business model to allow consumers to "buy" their own egg-producing hens. Participating farms guarantee that their eggs have been produced without the use of antibiotics and in a high-welfare environment. Customers can use their phones to scan a QR code linked to each egg, confirming its provenance and the standards and certifications of the farm from which it was produced.

HLB has seen its sales triple in the wake of the dioxin-tainted eggs scandal earlier this year. Farms using its technology are bringing over 130,000 eggs to consumers each day, and the company has plans to expand the business and pursue a market listing in the next three years.

If companies in the Asian meat sector are to satisfy investor appetites, they must improve environmental and social standards -- especially in the areas of food safety, antibiotics use, and water and emissions management. Asian companies and products that rise to this challenge will find themselves catering to a hungry market.

Maria Lettini is director of the Farm Animal Investment Risk and Return Initiative.