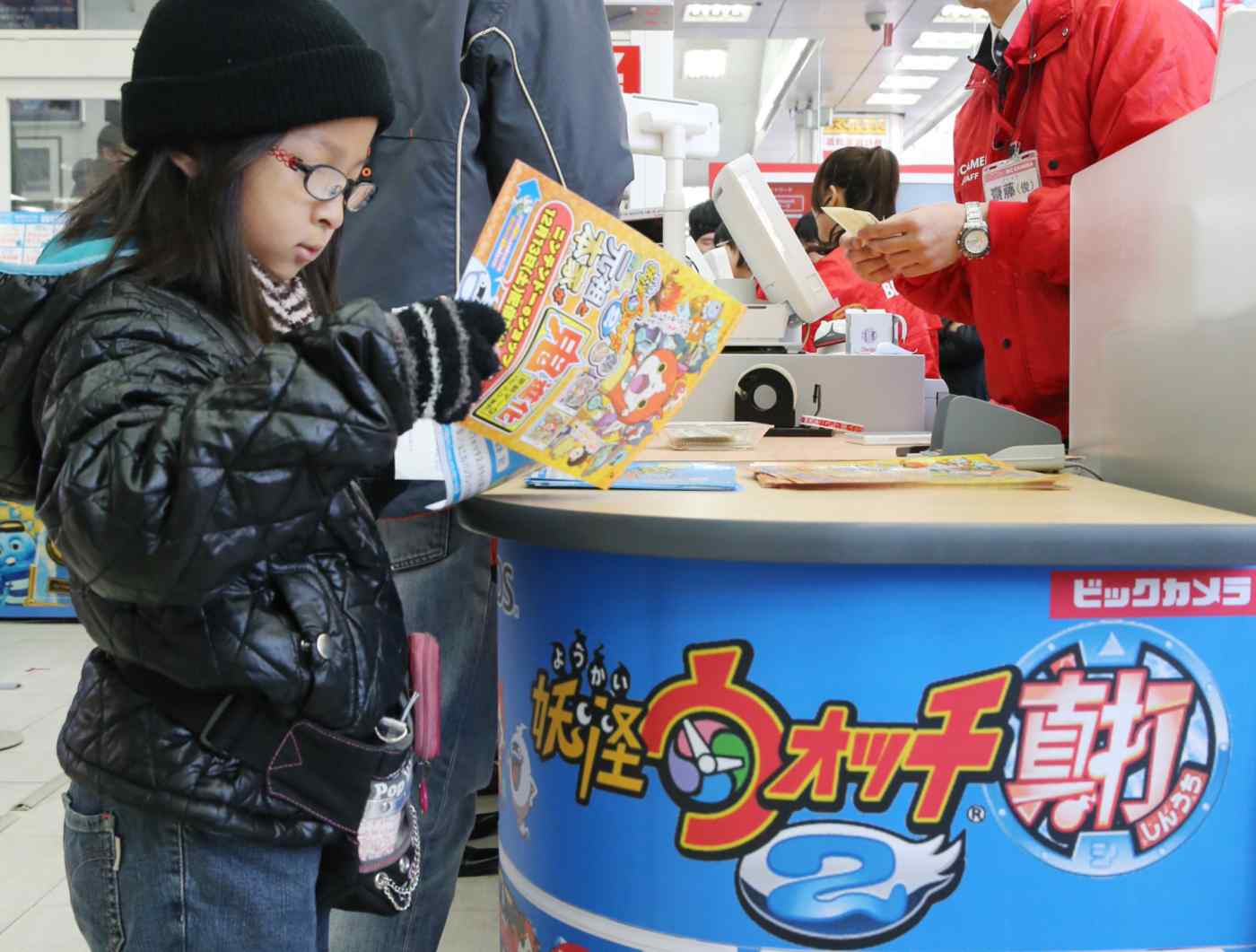 OSAKA -- Even as its "Yokai Watch" game series flies high, Nintendo has halved its operating profit forecast for this fiscal year in another sign that the company's business model no longer fits the changing environment.

"Although we were blessed with hit games, the impact of not being able to release the new [Nintendo 3DS] system in the U.S. and Europe in 2014 was bigger than expected," President Satoru Iwata said in an earnings briefing here. The lackluster performance cannot be blamed on weak traffic in the Nintendo sections of stores during the year-end shopping season. At an Osaka consumer electronics store, for example, the 3DS section was jammed with fathers buying such games as "Yokai Watch" and "Pokemon" titles for their kids.

Japan's 10 top-selling game system software titles of 2014 were all for Nintendo systems, with eight for the 3DS, according to Famitsu magazine. "Yokai Watch 2 Ganso" and "Yokai Watch 2 Honke" together sold 3.05 million units.

But beyond the big-name titles, game sales have lagged. Nintendo's global game sales last year were down more than 10% compared with 2011, the year in which the 3DS debuted. With cumulative 3DS sales surpassing 50 million units over roughly four years, the market is maturing. Nintendo's vision of having the "Yokai Watch" boom lift weak hardware sales did not pan out.

In the past, Nintendo succeeded by alternately releasing new home consoles and handheld systems. The Wii U console, launched at the end of 2012, has been struggling. Nintendo released several popular Wii U titles this fiscal year, and Iwata resumed overseas travel he had avoided after surgery, spearheading an effort to boost sales in the U.S. and Europe. Still, the Wii U's cumulative sales of 9.2 million units do not even amount to a tenth those of the successful original Wii.

To boost hardware sales, Nintendo will need to attract new customers it could not reach before. Iwata said Wednesday that smart devices will be a focus for discussion in the first half of the year. The market expects Nintendo to leverage smartphones and tablets, possibly to introduce its software titles to their users.

But smartphone games are a highly competitive arena where major social networking services and various other companies already have a head start. And Nintendo has announced that it will not offer paid games for smartphones, likely out of concern over hurting its hardware sales.

Nintendo is on track to post an operating profit for the first time in four years. But the 20 billion yen expected for this fiscal year is a far cry from the record 555.3 billion yen of fiscal 2008. The company does not have much time left to make big changes to regain its former glory.