All the colors of the rainbow were on display at the Taiwan LGBT Pride Parade in Taipei on Oct. 31, 2015.

TAIPEI   Nothing about the nondescript side entrance to an unremarkable building in western Taipei hints at what lies beyond. But to those in the know, it's the portal to one of the most famous gay recreational clubs in East Asia.

Aniki is a 3,305-sq.-meter subterranean sanctuary just for men. Covering two floors and equipped with a gym and sauna, it's a place where customers can work out or look for flings without fear of legal repercussions or harassment by outsiders. Nude parties are a fixture there.

THE STUFF OF LEGEND   One of the owners, 38-year-old Clark Chu, says the club gets searched more than most by police looking for drugs. But despite the heavy scrutiny by the authorities, Aniki is thriving. Indeed, the club has attained almost legendary status in the gay community, and is a must-visit spot for overseas visitors during the annual local gay pride parade in the autumn.

"Being gay in Taiwan is free and happy compared with other Asian countries," said Chu.

"I hope gay people like me can enjoy a safe, clean place with privacy, where we can feel comfortable hanging out and having fun with friends," he said. "I don't want gay clubs to be linked with drugs and AIDS anymore." 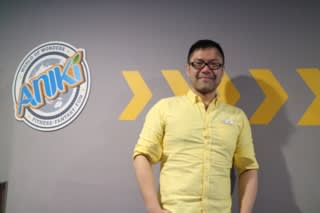 Clark Chu, co-owner of Aniki, a men-only club in Taipei, said being gay in Taiwan is easier than in other Asian countries. (Photo by Cheng Ting-Fang)

Chu says he has been openly gay since his elementary school days. His mother, who passed away years ago, had supported him.

"I have seldom faced discrimination throughout my life, as Taiwan is relatively open to the lesbian, gay, bisexual and transgender community, and not many religious groups are lashing out at us."

By most measures, including a relatively high level of public tolerance, Taiwan is one of the most LGBT-friendly places in the region. It boasts one of the biggest annual pride parades in Asia. The first time the parade was held, in 2003, only about 500 people joined. Last year, some 80,000 people marched in the streets of Taipei during the October rally, waving rainbow flags and banners calling for same-sex marriage.

Although same-sex marriage is not allowed under Taiwanese law, six municipal governments there show their support for LGBT rights by allowing gay couples to register their partnerships symbolically. Taiwanese President-elect Tsai Ing-wen said during her campaign that she supports marriage equality.

Randy Berry, special U.S. envoy for the Human Rights of LGBTI Persons (the I stands for intersex), said that in most of the Asian countries he has visited, the discussions have focused on the issues of extreme violence and discrimination. But in Taiwan, he said, "the nature of conversation is more about the basis of equality and what that means." Berry traveled to Taiwan in January for the first stop on an Asian tour that included stays in Vietnam, Thailand, Indonesia, South Korea and Japan.

The opportunity for profit may also be helping to drive acceptance of the LGBT community. Companies are beginning to recognize that a niche exists for their products and services among a group of people with considerable spending power.

Unicorn, a Taiwanese startup that sells body-care products, has found success with its lineup of gay-centric products. Its bestsellers include a buttocks-toning "sheet," an abdomen-sculpting gel and an acne-fighting body lotion.

The company launched an online store last June. Within six months, sales through the site reached 4 million New Taiwan dollars ($123,000). Of that amount, 10% came from outside Taiwan, including Hong Kong, China and locations in Southeast Asia.

"For all of 2016, we expect to generate NT$10 million in sales with a four-person team plus a few interns," said the company's 28-year-old founder, Johnny Shih, a chemical engineer-turned-entrepreneur.

Shih said he is thrilled by the vast potential of the "pink economy" and has every intention of banking his company's growth on the gay community.

"We have developed products to cater to the needs of a specific market that very few global brands look after," Shih said, adding that online word of mouth has helped propel Unicorn's rise. 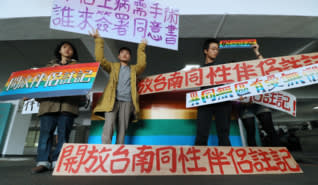 Members of the Lang Cheyn Shin Factory, a group advocating for LGBT rights, hold a rally for same-sex marriage outside a government office in Tainan on Jan. 8. (Photo by Shinya Sawai)

Shih also said he is taking pains to ensure that his company offers the same family benefits for all employees -- gay and straight -- and that it has zero tolerance toward discrimination against LGBT staff.

Multinational corporations that have been championing diversity are also promoting similar campaigns in their Taiwan offices.

Among the 500 employees at the Taiwanese branch of JPMorgan Chase, for example, over 100 have joined PRIDE, a networking group established last October to promote equality and inclusion for LGBT staff.

PRIDE hosts panel discussions and movie screenings to heighten awareness of diversity and equality and has been expanding its outreach by attending the LGBT parade, sponsoring the Taiwan International Queer Film Festival and collaborating with other LGBT-friendly companies in Taipei, such as Citi, Google, Microsoft, Hewlett Packard and Goldman Sachs.

"We would never want any employees to feel worried if they reveal their sexuality, as we embrace diversity as part of our core corporate culture," said Alex Chio, managing director of marketing and product at J.P. Morgan Asset Management in Taipei.

Chio said the company offers the same family benefits to all its employees, and its LGBT staff are eligible for paid leave for child adoptions and weddings. Furthermore, he said, the company reserves the right to not work with any business that discriminates against LGBT groups.

While many multinationals are flying the flag of equality, local businesses are taking a less active stance.

"It is still disappointing that no big local companies or Japanese companies in Taiwan publicly support LGBT rights," Chio said.

"TRUE EQUALITY"   Echoing that regret is Wayne Lin, chairperson of Taiwan Tongzhi Hotline, one of the oldest LGBT rights groups on the island. Tongzhi means both "comrade" and "homosexual" in Chinese. The group has been providing counseling services over the phone to LGBT people for nearly 20 years.

Lin said it is in companies' best interests to support diversity. By taking a pro-LGBT stance, he said, businesses can attract more customers from the LGBT community, retain high-performing LGBT staff and draw new talent from the community.

He said that discrimination still exists in the workplace and that paying lip service to being open-minded is not enough. What is needed, Lin said, is "true equality." Without that, "then it is of no use for companies to offer benefits for LGBT couples. Their LGBT staff will only continue to stay in the closet and will not want to out themselves and put themselves at risk to claim the benefits."