Out of rehab, JAL goes looking for deals 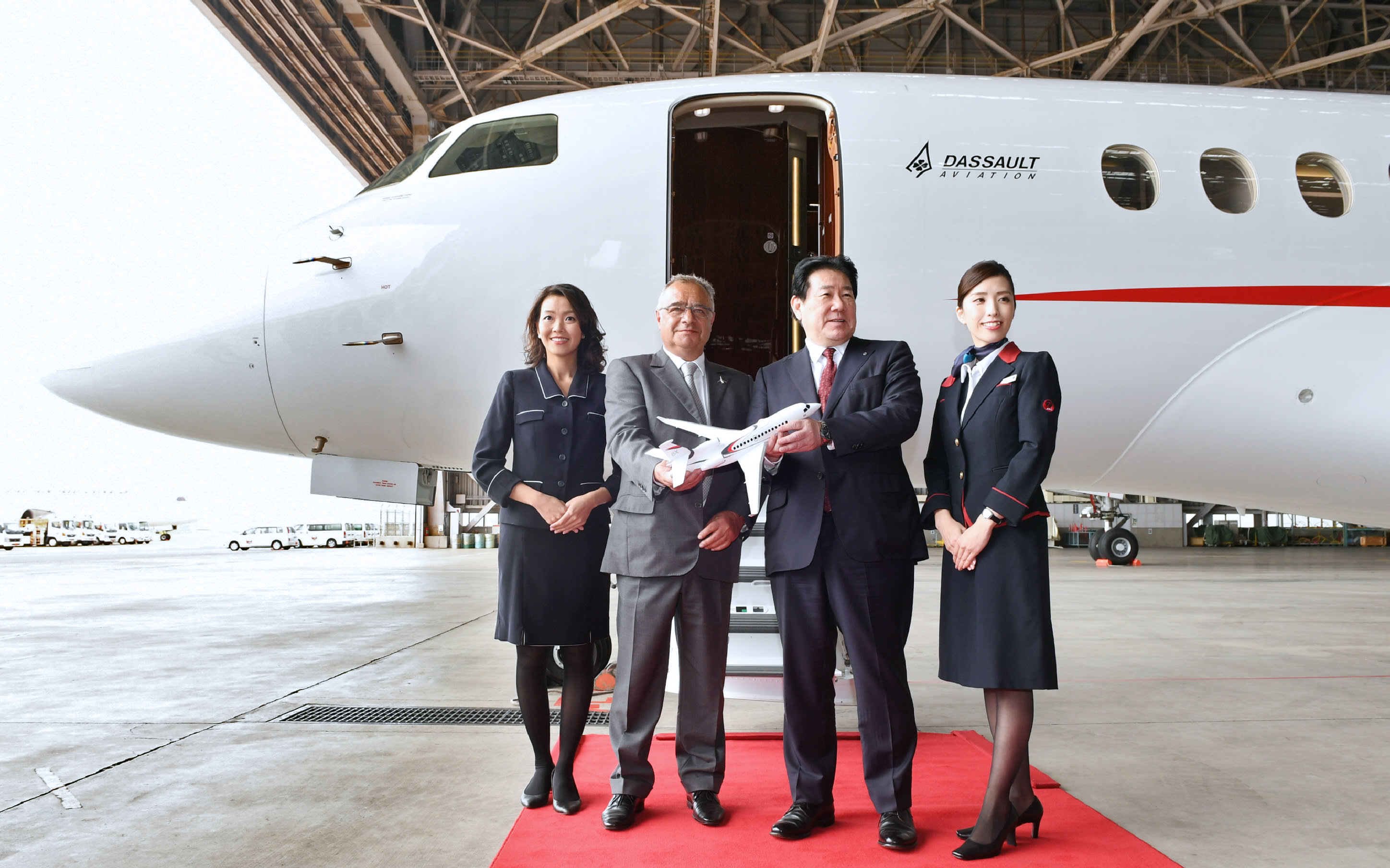 TOKYO -- Japan Airlines is switching to an expansion mode, having completed a humiliating rehabilitation process on public money, but the company remains cautious, for now.

On Tuesday, the Japanese carrier announced it had signed a deal with France's Dassault Falcon Service to launch interconnection flights, taking passengers from Tokyo to Paris on JAL flights and then to destinations in Europe and Africa on Dassault Falcon's business jets.

Under the government-led rehabilitation program, JAL has imposed a cap on its spending, but that limitation expired at the end of March. The interconnection service, though a small step forward, signifies the company has switched to a growth mode.

In the press conference to announce the deal at Tokyo's Haneda Airport, JAL President Yoshiharu Ueki described his experience of flying on a business jet between Paris and London.

"It creates value in terms of time, and lightens fatigue in both the body and the mind," he said.

With the JAL Falcon Business Jet Service, as the interconnection service is called, passengers from Tokyo are taken on scheduled JAL flights to Paris. They then transfer to a Dassault Falcon Service business jet to continue to destinations in Europe and Africa. With a premium price tag of about 25 million yen ($230,000) for a model plan that takes passengers on a tour of four African countries, the service targets wealthy individuals and business customers.

Under the deal, JAL receives commissions for bringing in customers to the service, which targets annual orders of a total 50 hours of flights. Although it is not expected to make a significant profit contribution to JAL, which expects 170 billion yen in operating income, the company hopes the addition of more wealthy customers will help improve its brand image.

Affected by the introduction of an excessive number of large aircraft and rash decisions to expand routes, JAL became insolvent in 2010. It entered a rehabilitation process on a 350 billion yen injection from the then semi-governmental Enterprise Turnaround Initiative Corporation and relisted in 2012.

As part of the process, the Transport Ministry imposed caps on the company's investment and route additions to prevent it from using the public support to its advantage and distorting fair competition in the airline industry. But the limitations expired at the end of March, unshackling the company. The very next day, JAL launched a direct route from Haneda to New York.

In describing what JAL's next medium-term plan will look like when it is announced this month, Ueki sounded cautious.

"It will have a bit more of a growth-seeking note compared to our current focus on quality," he said.

But JAL may soon gear up its expansion mode to counter recent aggressive moves by rivals, some of which have grown bold enough to transcend traditional boundaries of airline groupings. Domestic rival ANA Holdings, for example, signed a deal in 2013 with Garuda Indonesia to launch code-share flights, stepping outside Star Alliance and joining hands with the SkyTeam member. Germany's Deutsche Lufthansa and Cathay Pacific Airways have also jumped their alliance boundaries to launch a code-sharing service.

JAL is feeling the heat from escalating competition. Last July, ANA Holdings invested in Vietnam Airlines, which terminated a code-sharing deal with JAL.

Analysts think JAL will need to sign major capital tie-ups, sooner or later. Ryota Himeno of Citigroup Global Markets Japan is closely watching JAL management, who have been away from tie-up activities, to monitor their skill in steering the company to achieve viable partnership deals.

"The key is whether they have the right people to achieve the balancing act of maintaining JAL's current high margins and making growth investment," the analyst said.

That said, JAL has built a strong financial base in the past few years, with retained earnings exceeding 620 billion yen, about twice the figure for ANA Holdings. It presents a threat to rivals, and makes small-to-midsize airlines salivate for the financial support it is capable of providing them. That, in turn, makes JAL a focal point in the global airline industry.