A module is lifted from a flatbed trailer and hoisted into position. (Photo by Ken Barrett)
KEN BARRETT, Contributing writerAugust 15, 2017 11:51 JST
CopyCopied

SINGAPORE -- Imagine building and fitting out a 40-story residential tower far away from its actual location, and then transporting it to the site in segments where it can be swiftly assembled like a giant Lego kit.

Imagine the lack of construction noise and dust, and the reduced disturbance to the neighborhood.

Imagine, too, the reductions in manpower that could be achieved, with much of the prefabrication being carried out by factory equipment and robotics.

This has been a vision of the Singapore government for some time, and a condominium project under construction in the island's leafy Clementi Avenue shows how it can be achieved.

Prefabricated in Malaysia, the tower elements are trucked over the causeway to Tuas, the industrial zone in western Singapore, where they are finished and fitted out. They are then trucked to Clementi and piled one on top of the other.

Clement Canopy is the first structure in Singapore to be built using an all-concrete version of the PPVC (prefabricated prefinished volumetric construction) system, in which free-standing modules complete with finishes for walls, floors and ceilings are prefabricated and then erected on site.

Although this form of construction has been used elsewhere in the world, the project is the tallest ever to be built anywhere using concrete PPVC.

Designed by ADDP Architects and with Dragages Singapore as the main contractor, Clement Canopy comprises two 40-story residential towers and is being built under a tight 36-month schedule.

Marketed as an upmarket condominium development in a prime neighborhood renowned for its colleges and handily close to the main arterial highways, the project is far from the bland, cheap image usually associated with prefabricated housing. 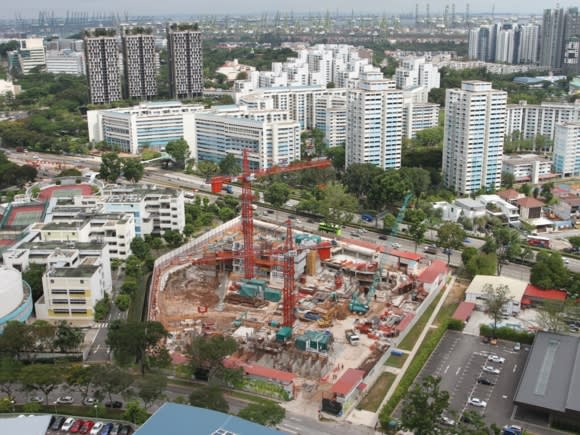 The government has long promoted the use of new technology to modernize the industry, increasing productivity, lowering costs, reducing environmental damage, and cutting back on the use of unskilled foreign labor.

Singapore's Building and Construction Authority has announced a string of initiatives to encourage companies to adopt prefabrication technology, and in 2014 mandated the use of PPVC for selected zones.

Government and the construction industry are monitoring Clement Canopy closely, the ramifications for both being potentially enormous.

Price comparisons with conventional construction are difficult. PPVC entails high initial costs, with investment in factory space and equipment, and meticulous logistics. But as the number of projects increases, costs should fall.

Singapore's official figures indicate that PPVC can potentially achieve productivity improvements of up to 50% in terms of manpower and time savings, depending on the complexity of the project. Dust and noise pollution can be minimized. The bulk of the installation activities and manpower are also moved off-site to a controlled environment, potentially improving safety.

Dragages Singapore was appointed to the project in April last year by developers United Venture Development. Clement Canopy, at 140 meters tall, will have 505 apartments with a total floor area of 46,000 sq. meters. Under Singapore government land-sale requirements, 65% of the superstructure has to be constructed using reinforced concrete PPVC modules.

Kevin Lai, senior production manager at Dragages, said the contractor had first used a PPVC system in 2006, but on a relatively modest scale, when prefabricated bathrooms were used in a condominium project at Marina Bay. 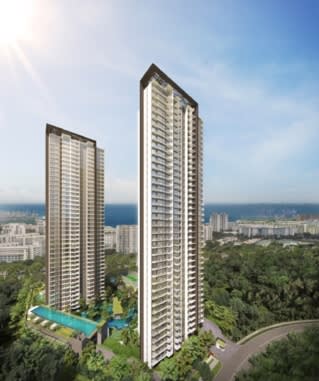 An artist's rendering of Clement Canopy

"The first time we did a complete PPVC project was at the nine-story Crowne Plaza Hotel extension at Changi Airport, which has just been completed," he said. "The modules were prefabricated in Shanghai, but they are steel-framed and are quite light, at less than 20 tons."

The contractor's second full PPVC job was the Woodlands Crescent Nursing Home, also nine stories, which is a steel and concrete hybrid. Each ward consists of three or four modules, weighing 10 to 20 tons each, Lai said.

Lai said that during the planning stage Dragages and ADDP Architects worked to optimize the layout, dividing the residential units into modules and ensuring that one tower crane could be used to build each block. In this way it was calculated that the heaviest module would weigh 29 tons, with the lightest at 17 tons.

This necessitated importing two heavy-lift tower cranes from Germany, with the heaviest lift capacity of their kind ever to have been brought into Singapore. They have the capacity to move 40 tons at a working jib radius of 35 meters.

The largest of the modules measures 8.5 meters in length by 3.2 meters width and 3.15 meters in height, complying with Singapore road transportation regulations.

"Lifting the modules into place is very quick," said Seng Swear Wern, civil production manager on the project. "It takes only a few minutes to lift the module, but longer to do the precision placing. Placing has to be within plus or minus 2mm, because if there is any greater discrepancy, the entire building could become out of alignment."

There are 1,866 modules in total. In the early stages of the project, Dragages is lifting an average five modules per day, aiming to increase this to eight as the project progresses. The total lifting operation is planned to take around 13 months.

"As this is our first fully concrete PPVC job, and as we are still in the early stages, we are learning from our experience," said Seng. "This is very much a factory production line system. Certainly, long-term there is going to be a significant productivity improvement."

Advocates of the PPVC system say stringent quality control in the factory ensures a uniformly high quality of the prefabricated elements. The elements themselves are assembled on what is essentially a pin-and-socket method, and the structural integrity of the completed buildings means that they are as safe as any conventional reinforced concrete-frame tower in the event of high winds or earth tremors.

Although the occupancy date for Clement Canopy is some two years away, 200 units were reported sold in March during a pre-completion release.