Pulau Ubin is a day's trip, and a world away PULAU UBIN, Singapore It takes no more than 15 minutes to make the eastward crossing on a juddery old bumboat from Changi Jetty on Singapore's main island to Pulau Ubin, where gray-barked pulai trees stretch skyward, their pillar-straight trunks evoking the slate and glossy office towers that crowd the Singapore skyline.

The 10.2 sq. km boomerang-shaped Pulau Ubin is "the last kampong," or village, and "a living showcase of what Singapore was like in the 1960s," according to Visit Singapore, part of the country's official tourist board.

Not surprisingly for a place advertised as such, the short boat trip across the narrow strait aims to take visitors back a half century. Pulau Ubin, or Granite Island, is a preservationist's pearl -- a verdant throwback to the preindustrial, preurban way of life still to be found here and there in rural Malaysia and Indonesia. Those old ways are otherwise history in Singapore, where 5.6 million people are jammed onto a mere 720 sq. km of land. 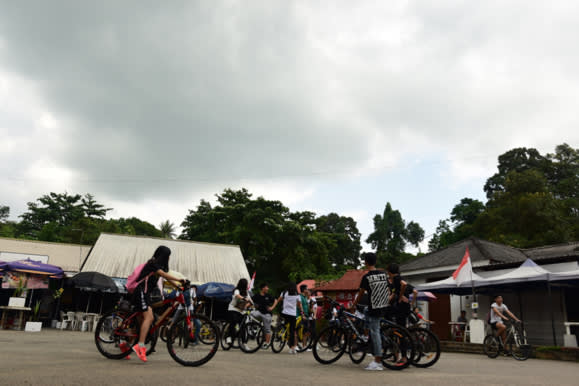 One of the first things visitors to Pulau Ubin see after hopping off the bumboat is a row of bicycle rental shops. Pedaling is the best way to see enough of the island in a day, before the last ferry heads back to Changi around sundown.

Water, maybe some insect repellent, a small towel and, depending on the season, an umbrella -- these can be dropped into the bike's front basket as a hedge against the heat, humidity and persistent mosquitoes -- are all a day-tripper needs. If you are planning an overnight stay, bring a tent and head to either one of the two designated campsites -- after dropping into the island's police post to let the authorities know you will be staying until morning.

The contrast between Pulau Ubin's muggy senescence and the busy orderliness of Singapore has become the small island's raison d'etre. Plans to develop part of the island in the early 2000s -- shortly after the last granite mine closed -- were halted when it was discovered that Pulau Ubin featured a 100-hectare wetland called Chek Jawa that was teeming with wildlife. The Singaporean government said it wanted to keep Pulau Ubin in its current rustic state for as long as possible. 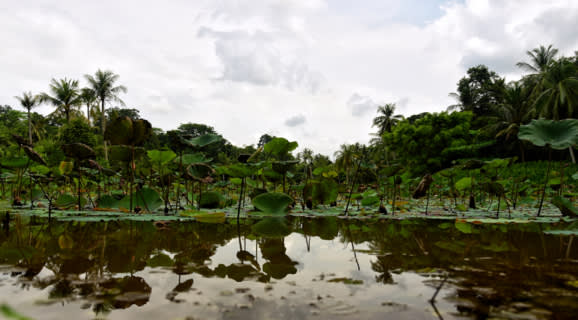 So instead of turning Pulau Ubin into a replica of the Singapore mainland, a viewing tower and a kilometer-long boardwalk were built around the wetland, allowing visitors to peer above and amble through the biodiverse mangroves. There, mudskippers and fiddler crabs scuttle through the sodden undergrowth, while hawks and eagles circle above, eyes down for a meal darting along the shore.

Above the wetland stand two beacons that light the way for vast cargo ships making their way past Pulau Ubin to the Strait of Johor or the Strait of Malacca. The vessels -- stacked high with containers as vivid in their own way as the flamboyant flowers and butterflies fluttering around the Pulau Ubin foliage -- are a reminder that "Ubin," as it is called for short, is part of a trading hub with the ninth-highest gross domestic product per capita in the world.

And if the ships are not emphatic enough of a reminder that Singapore is a thriving entrepot and home to the world's second-busiest port, every two minutes there is the encroaching whirr of passenger jets swooping down over the southern tip of peninsular Malaysia, dropping low past Pulau Ubin and onto the Changi Airport runways across the water.

CONTROLLED SIMPLICITY Most of Pulau Ubin's attractions are within a 15- to 30-minute cycle ride of each other, linked by well-kept paths with frequent warnings to slow down and mirrors mounted above bends. Some of the precautions -- such as signs telling cyclists to dismount and walk downhill -- have a slightly nannyish air, however, given that most traffic is either pedestrian or two-wheeled, and tends to move at a pace suited to appreciating the profusely green surroundings, dotted with the yellows and pinks and azures of the flowers that sprout here and there.

Around the island there are other echoes of Singapore's regimen, such as the ubiquitous No Smoking signs at the rain shelters on the island's paths. Despite Pulau Ubin's novel allure and lush scenery, it does feel that the Singapore's Last Rustic Redoubt Old Kampong vibe is a bit forced, even indulgent. It is the environmentalist's equivalent of a well-to-do hipster opting for an old-style fixed-gear bicycle -- a common affectation in recent years -- rather than zipping along on a sleek, state-of-the-art road or mountain bike. It is worth remembering that Singapore's land area has been extended by 20% since the founding of the state in 1965, mostly by using sand dredged from beaches and rivers in neighboring countries, sometimes undermining ecosystems and disrupting livelihoods for fishermen. Indeed, Singapore's government said as far back as 2002 that it would not carry out any reclamation work around Pulau Ubin itself, dismissing concerns that it wanted to extend the small island's land area with more overseas sand.

But is it fair that Singapore refuses to build on Pulau Ubin when the alternative is to add to its land area elsewhere by acquiring sand dug up from beaches and rivers in Cambodia, Malaysia and Indonesia?

Environmental damage wrought by the sand trade led Indonesia and Malaysia to ban the sale of sand to the city-state. Singapore's sand trade with Cambodia, more recently the main source for reclamation work, has been tainted by large and unexplained discrepancies. A couple rides a tandem bicycle down one of the many well-kept paths winding around Pulau Ubin. (Photo by Simon Roughneen)

Cambodia's Ministry of Mines and Energy has said that 16.2 million tons of sand was exported to Singapore from 2008 to 2016, while Singaporean government statistics show that the city-state imported 70 million tons of sand from Cambodia over the same time period. Previously the Singaporean Ministry of National Development told the Nikkei Asian Review that "the figures reported by various parties and countries are dependent on their own calculation formulas, which we are not privy to."

For all of Pulau Ubin's accessible yet "get-away-from-it-all" charm, there is some irony in the undeniably stellar conservation work undertaken there: It has, in the end, been sustained partly at the expense of environments abroad.