Apps can tell when to plant, harvest and sell with unprecedented efficiency HTANTABIN, Myanmar When disease or insect infestation struck his rice plants in years past, farmer Kyaw Shwe could only guess at causes and remedies. Recently, however, he simply clicked on an app on his smartphone and discovered the problem was Scirpophaga incertulas, the yellow stem borer. He also found the specific pesticide he needed to kill it.

Kyaw Shwe is among millions of farmers in Myanmar who have benefited from one of the world's most rapid proliferations of mobile phones, and with them, apps that provide once-isolated and impoverished rural communities with everything from weather reports to crop prices at the nearest market -- or even on another continent. These agri-mobile apps to boost production and farm income are likely to have wide-ranging impact in Myanmar, where agriculture employs more than 60% of the workforce and accounts for nearly 40% of gross domestic product, according to the World Bank.

The agri-apps have already spread into almost every corner of the country. The two most widely used apps -- Green Way and Golden Paddy -- both came on stream in 2016.

The Myanmar Book Aid and Preservation Foundation has provided training in the use of these digital tools for about 1,000 government extension workers in the agriculture, livestock, fisheries and rural development sectors, as well as to civil society and journalists.

Green Way was developed over five years by Thein Soe Min, who had earlier worked for a nongovernmental organization in Myanmar's Rakhine State, where farmers often had problems that needed more expert solutions than his team could offer.

Today, his Greenovator startup has enlisted more than 1,800 local and foreign experts who answer queries from farmers. The free platform, providing a wide spectrum of information, also allows interaction with nongovernmental organizations, government agencies and traders. 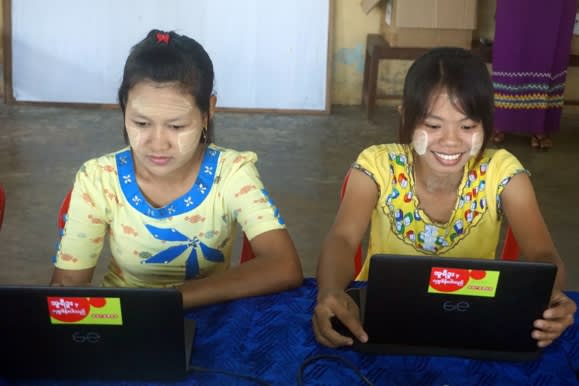 Erwin Sikma, a Dutch national who lives in Myanmar, developed Golden Paddy, which provides services to smallholder farmers though an app, website and Facebook. Sikma said the platform reaches nearly 3 million farmers a month, with about 1,500 registering for the app every week. Users are asked to give their locations, details of their crops and other data to help Impact Terra, Sikma's social enterprise, to customize the service.

EQUAL TERMS "The older people may not know much about modern technology, so these days their children tell them about it,'' said Zin Min Htaik, a government trainer, after teaching a morning class on basic computer skills for more than a dozen eager students aged 8 to 12. Since mid-2017 parents also have been given instruction in mobile phone use and an agriculture-focused course in communication for development -- a total of 39 hours of free tuition that is sponsored by the Myanmar Book Aid and Preservation Foundation.

Started by a distinguished scholar, Thaw Kaung, and his technically oriented son, Thant Thaw Kaung, MBAPF seeks to spread general knowledge and computer literacy, especially among the disadvantaged. Supporters include UNESCO (the United Nations Educational, Scientific and Cultural Organization) and the Bill and Melinda Gates Foundation.

Two graduates of the courses, both farmers in Htantabin, a rural community 40km northwest of Yangon, dropped by the center that morning, clutching Chinese-brand smartphones each had purchased for about $150.

Kyaw Shwe, who owns extensive rice fields nearby, said checking his smartphone several times a day has yielded multiple benefits -- from the best prices for his rice and agricultural equipment to real-time weather forecasts. "If I find there is a storm coming I will stop seeding until it passes,'' he said. The second graduate, Myo Han, said he offers free advice to neighboring farmers, helping them to boost their incomes by tracking rice prices on the Yangon market. The former civil servant and banana plantation owner said the price of a 49kg bag of nonorganic, high quality rice can vary from $15 to more than $22 over the course of a year. He also charts labor and transport costs.

''As farmers become more educated, and if the current trend continues, in another five years we farmers will gain more power,'' said Myo Han.

GROWING POWER The digital tools are also helping farmers to combat natural problems: Myo Han consults Green Way when snails raid his neighbors' crops, and can photograph fungal infections and talk to online experts about how the snails can be eradicated.

When the government ended a monopoly on telephone services in 2013, mobile phone penetration stood at less than 10% of the population. Today, almost 90% of people have access, including 32 million farmers.

No one expects digital technology to sweep away agricultural woes. Farmers said that data on market prices has limited value to many rural people, who must sell at harvest time regardless of prices. Many also lack storage facilities.

But word of mouth, the sometimes-dubious advice of local government officials and often-ineffective traditional practices are being rapidly replaced by the new apps. More sophisticated input is on its ways via drones, satellites and other leading-edge technology.