SoftBank's Son stands up to anti-Korean bigotry in Japan

TOKYO -- SoftBank Group Chairman and CEO Masayoshi Son has long been discriminated against by Japanese because he is ethnically Korean. 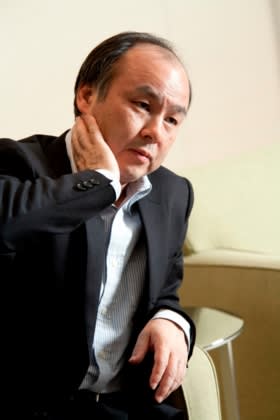 Even in his early childhood, he was attacked verbally and physically by Japanese classmates. In kindergarten, he was jeered at for being Korean. Once, another child cut his head open with a stone.

Today, he finds himself the target of malicious comments on the Internet. In a recent interview, Son talked about his experiences and his decision to be open about his background.

Q: Why did you choose to use your Korean family name instead of your Japanese one?

A: I used to go by Masayoshi Yasumoto before I went to the U.S. at the age of 16.

After I returned from the U.S. and decided to start a business, I had a choice before me -- whether I should go with the Japanese family name Yasumoto, which all my family and relatives use, or the ancestral surname Son.

It is undoubtedly easier to go by Yasumoto when living in Japanese society. A number of celebrities and professional athletes use Japanese family names in their chosen professions. It is not my intention to criticize such a practice. But I decided to go against the tide and become the first among my relatives to use Son as my family name.

I won't go into the reasons and the origin of this issue, but if you are born into one of those families of Korean descent, you are subject to groundless discrimination. There are many children who undergo such hardship.

When I was in elementary and junior high school, I was in agony over my identity so much that I seriously contemplated taking my own life. I'd say discrimination against people is that tough.

Then you might ask why I decided to go against all my relatives, including uncles and aunts, and started to use the Korean family name, Son.

I wanted to become a role model for ethnic Korean children and show them that a person of Korean descent like me, who publicly uses a Korean surname, can achieve success despite various challenges. If my doing so gives a sense of hope to even just one young person or 100 of them, I believe that is a million times more effective than raising a placard and shouting, "No discrimination."

Q: Your coming out as an ethnic Korean risked involving the rest of your family, right?

A: I met with fierce objections from my relatives, who had hidden their real family name to live their lives in a small community. One of my relatives said, "If you come out as a Son from among us, that will expose all of us."

People would start saying things like "They are ethnic Koreans" or "Your nephew is a Son, not a Yasumoto. So, you, too, are part of the kimchee clan." That's why they tried to dissuade me. But I told them: "What I will do may disturb you all, uncles and aunties. If so, you don't need to say that I am a relative of yours. Just pretend that I am not related to you."

Q: I hope there will be more success stories like yours in Japan. What do you think is necessary for that to happen?

A: Currently, many Japanese companies are losing confidence. They are losing out to competition and have collectively become introverted. In such circumstances, even if we are the only one, SoftBank has risen to the occasion and taken on much bigger rivals in the U.S. And if we survive ... that will create a ripple effect and inspire even one company or 10 companies. I think that's a form of social contribution. 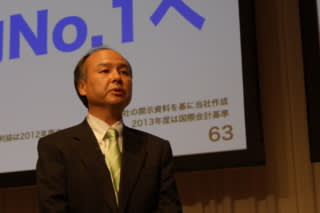 Son speaks before an audience. The slogan in the background says, "Challenge yourself and new horizons will emerge."

While it is important to oppose a move toward widening the wealth gap and put in place a social safety net, I think there is no need to stand in the way of other people's success. It is unnecessary to gang up and lash out at those who are successful.

Successful people can serve as a light of hope for others. Personally, I think it is important to create a society where we can praise success and successful people. That will help keep alive Japanese dreams and create Japanese heroes.