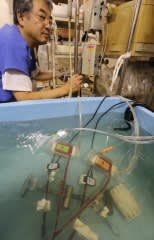 At Tohoku University, an artificial placenta is hooked up to a fetal lamb.

TOKYO -- Japanese researchers are pioneering new fertilization and genetic technologies that could alter the meaning of human reproduction. But such advances are also forcing them to face the thorny moral and ethical questions posed when tinkering with life and mortality.

A team at Tohoku University has developed an artificial placenta and uterus that can sustain a fetal lamb, which is suspended in a plastic tank with amniotic fluid heated to 39 C. Blood oxygen is supplied through a tube that acts as an umbilical cord. University researchers endured decades of failure before figuring out how to adjust blood volume, enabling them to sustain a lamb fetus for at least 50 hours.

This may someday be replicated in humans, paving the way for reproduction in which gestation occurs in an artificial vessel rather than a uterus.

The research is inching toward studies involving human cells. The results may help save lives, such as premature babies, offering benefits to many. "Our goal is to be able to save even ultralow-birth-weight babies weighing around 500 grams," said Tadashi Matsuda, a Tohoku University professor of pediatrics.

Such advances may someday help free women from the disadvantages resulting from pregnancy and childbirth, along with health risks.

But Matsuda acknowledges that gray areas surrounding neonatal medicine often raise ethical questions. He does not allow any pictures of the fetal lamb, citing how such images may impede rational discussion on the research.

The research leads to the loaded question of whether the fertilization of an artificially created egg and sperm should be allowed. Countries have yet to set rules. But in the U.S., only 40% believe in evolution, polls show. Many are offended by progress in biotechnology and other sciences, especially if research is perceived as venturing into God's domain.

Abuse of new technology by those in power could create havoc. Cloning oneself or mass-producing soldiers at a "human factory" may not be far-fetched. To ensure that technology is used with the best intentions, legislation and ethical guidelines must be crafted with care.

The average person has abnormalities in 150 genes, according to research conducted in the U.S. and elsewhere. Tsuyoshi Miyakawa, Fujita Health University professor of neuroscience, predicts that genome analysis will be offered at around 100,000 yen ($940) in several years, making it accessible as part of a regular medical checkup.

Some genetic tests already point up the risk of certain medical conditions. A Japanese couple residing in New York recently signed up for a $99 test that uses saliva to assess potential medical risks they face. The husband, aged 44, was found to have a higher-than-average risk for developing Alzheimer's, while his wife, 40, had a similar level of risk for Parkinson's disease.

Such information can lead to prompt preventive care, but could also spell trouble if obtained by third parties. The U.S. Genetic Information Nondiscrimination Act, which took effect in 2009, prohibits the use of genetic information to discriminate against applicants for employment or medical insurance.

"Japan needs to have a similar type of legislation in place," says University of Tokyo law professor Norio Higuchi, an expert in medical law.

As a society, how can we maintain control over the benefits and pitfalls of technologies that infringe on God and nature? The hurdles are many, and the responsibilities grave.