The allure of Indonesia's beautiful giants of the deep KWATISORE, Indonesia Balanced precariously on wooden struts that jolt upward with every passing wave, three fishermen lean over the sea to lower buckets of baitfish into the waters of Cenderawasih Bay. Beneath them, the meter-wide gasping maw of a whale shark breaks the surface, then sinks below. Its fin throws up an arc of spray as it turns away to resume a slow patrol around the bagan, a traditional fishing platform composed of a floating scaffold fixed to a central boat hull and strung with lines and nets. Fishermen catch a whale shark in a bagan net in Cenderawasih Bay. (Photo by Peter Guest)

It takes half an hour to entice the animal -- a juvenile male, but already more than 5 meters long -- into the net. As the fishermen on the platform haul it close, a team of divers, waiting on two speedboats tied to the bagan, move in.

Almost daily, whale sharks turn up at the bagans at Cenderawasih Bay, attracted by the baitfish that accumulate in the nets. Once trapped, they are constrained enough that researchers can get to them to take blood samples and fit them with satellite tags, making this remote area off the coast of West Papua a uniquely valuable place for research into this enigmatic and poorly understood animal.

"What we experienced here is just completely, mind-blowingly unique, the chance to sit still with a whale shark. Everywhere else it's completely impossible," said Al Dove, vice president of research and conservation at Georgia Aquarium in Atlanta.

In late July and early August, Dove and Mark Erdmann, vice president of Asia-Pacific marine programs at Conservation International, led a nine-day, 10-person expedition to the bay, collecting unprecedented amounts of data about the behavior, biology and health of whale sharks, information they hope will inform conservation efforts in an area that Erdmann called the "epicenter of global marine biodiversity."

A wide-mouthed bay ringed by mist-shrouded hills thick with jungle, Cenderawasih has so far been protected by its isolation. Air links are poor, even from Jakarta, with most of the routes serving the mines that form the bulk of West Papua's economy. Visitors have to fly via Bali and Timika, then onward to pick up a boat in the coastal cities of Nabire or Manokwari.

However, the area -- nominally a national park -- is not insulated from the economic forces that have led to the destruction of large swathes of Indonesia's natural capital onshore and off. The maritime economy is worth 11% of the country's $930 billion economy; fisheries account for nearly three-quarters of that total. The Jakarta government wants to double that contribution over the next decade by dramatically expanding the fishing and tourism sectors, putting even greater pressure on the ecosystem services that support them.

ANCHOR RESEARCH As that development starts to encroach on Cenderawasih, scientists hope that by building a data set on the health of the region's wild whale sharks, they can create a benchmark that will allow conservationists and the government to better understand the impact of human activities on the ecosystem. 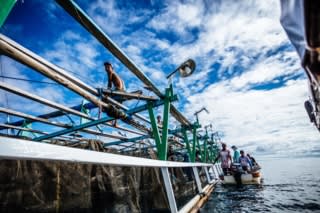 Fishermen watch as the expedition pulls up by a fishing platform. (Photo by Peter Guest)

Even armed with that information, they could be swimming against a strong tide. Cende

rawasih is a microcosm of the political, social and economic challenges facing maritime ecosystems in Southeast Asia, and particularly Indonesia.

The bagans themselves are imported from South Sulawesi, taking advantage of gaps in Indonesia's laws created by the complex devolution of some powers from Jakarta to the provinces. Fishing licenses have been handed to the owners of the bagan fleets by the regional government in Nabire, while the national park that covers the entire bay is administered by a body from Jakarta. The former, apparently, trumps the latter.

"In reality, it's a national park, and they really shouldn't be issuing fishing licenses," Erdmann said. "But that's the chaos that is Indonesian decentralization."

To further complicate the situation, local communities claim customary rights over the reefs and fish in the bay. Many Melanesian communities, such as those in Papua, see marine resources as their traditional inheritance, putting them into conflict with national legal systems that do not officially recognize their claims. West Papua is culturally and ethnically distinct from most of Indonesia, and highly sensitive to anything that could be interpreted as a threat to or dilution of traditional rights and culture. 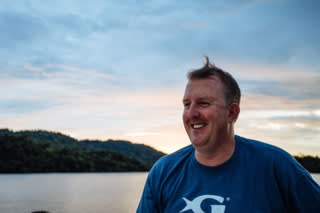 Local communities have taken matters into their own hands and extract rent from bagan owners moored in the bay.

The presence of the fishing platforms, while useful in the short term for research, is concerning in the long run. Stripping out the baitfish at the bottom of the food web would directly impact the sharks that feed on them, and could ultimately lead to the hollowing out of the entire ecosystem.

"It's unreported and unregulated," said Abraham Sianipar, a shark and ray expert at Conservation International.

Sianipar estimates that the fishermen are pulling a couple of tons of baitfish out of the water each day. "There's no one actually monitoring that, there's no one regulating that. That's scary to me, seeing the future," he said.

TOURISM LURE These days, the fishermen have a side business. Tourism is growing, albeit slowly. A few "live-aboard" dive boats moor in the bay each month, offering intrepid vacationers the opportunity to swim with the whale sharks at the bagans. Onshore, a single resort offers a couple of moldy shacks for rent.

Three days before the expedition boat, the Putiraja, set sail out of the bay, three motorboats of tourists arrived at a bagan being used for the study. While the research team worked inside the net, a dozen people were in the water, crowding around a pair of free-swimming animals, brandishing GoPro cameras as a drone whined overhead. The fishermen -- who can earn 4 million rupiah ($302) per day hosting tourists -- flung buckets of baitfish into the churning water.

While the fishing industry is a threat to the sharks' food supply, tourism -- if well-managed -- could be a way to tie the economic future of the area to its charismatic megafauna and, by extension, to the preservation of its wider ecosystem. Conservation tends to be most effective when it is driven from the bottom up, and where local communities have a meaningful stake in it.

In Kwatisore, a village of 200 people that is the largest settlement in the inner bay, a few small handicraft stalls sell wooden sharks for a few dollars each.

District leader Sam Andoyi said that traditional beliefs hold that the animals -- known locally as gurano bintang, or "star whales" -- are the ghosts of ancestors, who can drag a sailor from his boat and carry him out to sea. It is a superstition that is easy to understand when a 10-meter animal looms huge and alien out of the deep.

So far, the villagers only have a limited stake in the emerging tourism industry developing around the sharks. Erdmann helped to broker a deal whereby tourists on boats visiting the bay pay a voluntary 300,000 rupiah per person. National park fees go straight into the ministry of finance, but are not earmarked for specific conservation efforts in Cenderawasih.

Georgia's Dove, who has worked with governments in the Pacific to advise on how to balance their conservation efforts with the development of a tourist industry around the whale sharks, said it is vital to set a high market value for the sharks and their habitat.

Australia's Ningaloo Reef, which is also a prime region for whale shark spotting, has managed to find an equilibrium, he said. "It's set up as a premium experience, a once-in-a-lifetime, bucket list thing, and you pay accordingly."?The fear is that the diving business in Cenderawasih Bay will become a race to the bottom, like some of the resorts in Mexico and the Indian Ocean, where sustainability has taken a backseat to short-term market forces.

"I would hate to come back in 10 years' time to see dozens of 'live-aboards,' people crashing into the water," Dove said.

Dove and his colleagues hope that the data that they collected during their study, which included taking blood samples from 20 individual animals, will allow them to build a baseline understanding of how healthy whale sharks behave in the wild. From that, they will be able to measure how human activity impacts the species both in the bay and as they travel around the region.

With good data, they can advise local communities, governments and supranational bodies on how to limit the impact on the sharks and their surrounding ecosystems.

"If you can get people to care enough about whale sharks to do something about their plight, then a lot of other species get proxy protection because they're part of the whale sharks' world," Dove said.

"It's the ideal species to represent its ecosystem. It's large, it's harmless, it's peaceful and beautiful, it's covered in polka dots. What's not to love? It's a beautiful, beautiful species."