The complex culture and history behind 'K-beauty' The quest for slim jaws and wide eyes is common in South Korea -- and, with open attitudes to cosmetic surgery, it's easily accomplished. The enormous beauty industry is fuelled by celebrity imitation and informed by western ideals.

Walk into one of South Korea's ubiquitous cosmetic pharmacies and you'll find a wide selection of double-eyelid tape and glue products to create creases for the perfect almond-shaped eyes. Kim Lena, a 37-year-old analyst for an online-games company in Seoul, was a religious user of these products in her teenage years, like thousands of other young South Koreans. Later, during university, she and two friends -- again, like many other South Koreans -- made the double-eyelid look permanent via cosmetic surgery. "I didn't think much of it," she says. "Except that I didn't have to get messy with glue anymore."

Seoul-based plastic surgeon Dr Jung Hyunwook notes that many patients regard double-eyelid surgery as merely an extension of the tape and glue fixes. He practices in Gangnam, a Seoul district with such a high density of cosmetic clinics that people refer to "the Gangnam look", marked by a prominent forehead, slender nose and sharp "V-line" jaws. Given this relaxed attitude to surgery, it's unsurprising that South Korea has the world's highest number of plastic-surgery procedures per capita: 13.5 per 1,000 people. The country is also a major producer and exporter of fillers and botox and a hotspot for medical tourism, mostly for Chinese visitors. In 2017 plastic surgery ranked second after dermatology for nationwide specialist doctor recruitments, while South Korean men spent more money on grooming than men from any other country. All of this reflects a national psyche that places a premium on physical perfection -- a mindset that can be traced back to Korea's colonial past and that accords with modern-day South Koreans' desire to fit in.

The South Korean infatuation with beauty is inextricably linked with the national fascination with celebrity (it is much more extreme here than in Japan or in Europe, for example). South Koreans want to look like their favourite stars. For many fashion brands, such as Seoul eyewear label Gentle Monster, success comes only after their products are seen on famous people. South Koreans seek to emulate their idols' flawless faces via cosmetic products (or surgery) and attractive celebrities are referred to as wanpan stars -- which roughly translates to "sellouts" -- due to their ability to single-handedly drive brand sales (for example, actress Gianna Jun's look in the 2014 TV soap My Love From Another Star was apparently responsible for Saint Laurent's lip tints selling out across South Korea and China). "K-beauty," as the industry is dubbed, is valued at 12.4bn euros ($15.2bn) and owes much of its scale to K-pop and Korean Hallyu Wave, a term for Korean pop culture. 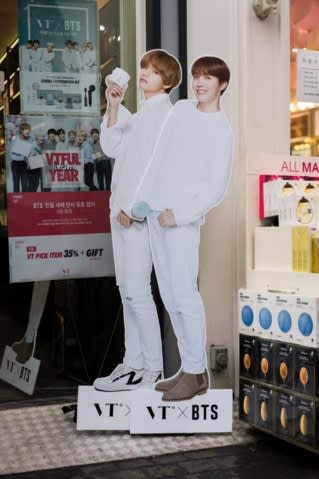 "K-beauty is all about creating the illusion of a flawless complexion," says Kim Chung Kyung, who is regarded as Korea's first make-up artist and has been creating looks for celebrities for more than 30 years.

"Porcelain-white skin is considered a necessary virtue for beauty in South Korea. This can be traced back to the fact that fair complexion has traditionally been a status symbol. South Korea used to be an agricultural society, where privileged classes did not toil under the sun and, as a result, had whiter skin."

Kim recently launched 1stC, her own line of vitamin C serum, which is already a hit as it has been widely publicised as an effective skin-whitener.

Yet the South Korean pursuit of beauty is about more than mimicking celebrities. Na Jinkyung, a professor of psychology who specialises in comparing eastern and western cultures, points to South Koreans' inherent collectivism as an underlying factor. "There is a widely accepted social standard in terms of beauty," says Na. "South Koreans will choose to alter themselves -- such as through surgery, which we call secondary control -- in order to fit with their environment. South Koreans derive self-worth from the acceptance of others, in contrast to the western focus on [creating one's own] self-esteem."

Na cites the nation's agricultural past, particularly its rice-farming heritage, as a reason for the collectivist attitude. "It is not possible to farm rice, a seasonal and labour-intensive type of harvest, without help from others," he says. "So South Koreans have had to depend heavily on others. Wheat farming, however, which is prevalent in the West, is something that can be done alone. The development of trade and commerce in the West has encouraged individualistic tendencies, as competitiveness is based on distinction from others." Other commentators suggest that the desire to fit in can be traced back to the nation's chequered past. "Korean society is marked by a strong trend-seeking behaviour, which is quite typical of colonised peoples," says Sang Min Whang, a psychologist whose research is focused on the identity of Korean people. In less than a century South Korea has experienced Japanese colonialism, from 1910 to 1945, and US military occupation following the Second World War. As the country underwent rapid modernisation and industrialisation, it looked towards western values. This was followed by big political shifts, going from military rule to democracy in the 1980s and 1990s.

"[Prior to these changes] South Koreans had espoused Confucian values that dictated that it would be a sin to even cut one's hair," says Dr Park Sang-Hoon, a plastic surgeon in Gangnam. "Just a century later people are willingly altering their physical features through surgery." Whang provides an explanation: "Koreans react strongly to power, privilege and status because of a certain survival mentality. This helps explain why they are eager to emulate celebrities."

Today this culture of "lookism" is widespread and institutional. Retouching passport photos is commonplace and, until 2015, most companies required that job seekers attach their photos to applications. The pursuit of beauty can be found across socio-economic classes. "I admire the range of affordable products and procedures available to people of all financial backgrounds in South Korea," says Nadeera Dawlagala, a general surgery resident from New York. "In the US only higher-income individuals tend to turn towards plastic surgery or have access to the best skin products or procedures."

There are signs, however, that attitudes are shifting. A recent study found that an increasing number of Asian facial surgeries are not aimed at westernisation but rather the optimisation of intrinsic Asian features. Meanwhile Sarah Kim, founder and ceo of talent agency Core Artist Management, discourages the models and actors she represents from undergoing invasive procedures. "Agencies used to finance aesthetic operations and many still do," she says. "But I think it's all about distinguishable rather than cookie-cutter looks."

For the time being Lena is in the minority. Looking distinctive might work for certain models but the wider collective are still searching for uniform, picture-perfect looks.

Lee Hyo-won is a Seoul-based arts journalist covering everything from feminism in films to Korean folk dance. Former Korea bureau chief of Blouin Artinfo, she has written for The Hollywood Reporter, Women's Wear Daily and CNN.com.