The intriguing sum of a Japanese painter's 'abstract parts' "Sarukanigassen" ("The Battle between the Monkey and the Crab"), painted in 1948, depicts a well-known Japanese folktale with a twist. (Courtesy of Tokushima Modern Art Museum)
TATSUYA HOSHIBA, Nikkei staff writerDecember 3, 2015 12:00 JST | Japan
CopyCopied

TOKYO Avant-garde artist Yuki Katsura straddled cultures and eras. Born in Tokyo in 1913, she lived until 1991, spanning Japan's prewar and postwar periods. Her work shows both Japanese and Western influences. Her themes include the deep changes in society from premodern to modern times. And she was active when the art world itself was going through a momentous transition.

Katsura is known for her allegorical works and lively depictions of animals. Though her paintings are anything but realistic, art critic Shigeo Chiba noted that they are not purely abstract, either. "They remain somehow representational," he said. "To put it another way, she assembles abstract parts to create representational images." 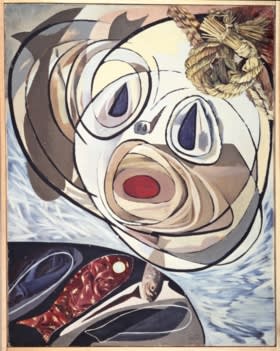 "Hito to Sakana" ("Man and Fish"), painted in 1954, blends a realistic rope with a comical face and fish shapes. (Courtesy of Aichi Prefectural Museum of Art)

Often, there is much more to Katsura's paintings than initially meets the eye. Consider "Sarukanigassen" ("The Battle between the Monkey and the Crab"). The painting is based on a famous Japanese folktale: A cunning monkey convinces a crab to trade a rice ball for a persimmon seed. Later, after the persimmon tree has grown, the monkey throws fruit at the crab, killing it. The crab's offspring, however, get their revenge in cooperation with a chestnut, a wasp and an usu -- a heavy wooden mortar used for pounding rice.

Yet Katsura did not merely rehash the tale. She appears to have been inspired by a novella by Ryunosuke Akutagawa, one of the giants of modern Japanese literature. In Akutagawa's story, also titled "Sarukanigassen" and written as a sequel to the folktale, the crabs and their comrades are arrested for killing the monkey. The main culprit, a crab, is executed, while the accomplices are sentenced to indefinite imprisonment. The premodern value of revenge is supplanted by the modern principle of the rule of law.

Look closely at Katsura's painting and you will find that the monkey is wearing a kasuri kimono -- a garment worn by villagers before the modern era. The picture seems to suggest that the old ways are being crushed. The mood and meaning of "Teiko" ("Resistance"), painted in 1952, changes when the canvas is turned 90 degrees clockwise. (Courtesy of Museum of Contemporary Art Tokyo)

SOCIAL COMMENTARY   "Teiko" ("Resistance") is another example of Katsura's fondness for hidden messages. The painting is generally considered to be a commentary on the subversive activities prevention law, enacted in Japan following the Bloody May Day riots of 1952. At first glance, this is not apparent.

The person on the lower right of the painting clings to a bird's leg with both hands. The expression on the face seems to be one of shock. On the left, a crab looks toward us with a vacant eye under its claw.

Turn the picture clockwise 90 degrees, however, and it looks dramatically different. The person appears to be screaming as the crab pulls his or her long hair. Katsura was likely making a statement on how state power suppresses society.

Katsura lived in the U.S. from 1958 to 1961, steeping herself in an American art scene that was undergoing a dramatic shift. Jackson Pollock's drip paintings had disrupted old conventions. Jasper Johns was turning everyday items into sculptures. For Robert Rauschenberg, trash was often the medium of choice.

Katsura saw how these artists surprised and perplexed people. She later said their outlandish methods had greatly pleased her. "Sembon-ashi" ("Millipede"), painted in 1962, stops short of pure abstraction because of the legs along the side of the green object. (Courtesy of Shimonoseki City Art Museum)

Still, Katsura did not simply imitate them. After returning to Japan, she painted "Sembon-ashi" ("Millipede"). A green object occupies almost all of the canvas, but the piece stops just short of the abstract threshold. This is due to the numerous legs along the edges of the green body.

The legs change what would have been an abstraction into a picture of a living thing. The viewer may start to wonder: Just what kind of creature is this? How does it walk? The uneven texture begins to look like some kind of skin, tempting one to reach out and touch it. Katsura paid a great deal of attention to tactility. Another example is "Oimo" ("Sweet Potatoes"). The 17 yams in the picture prove she could paint realistically when she wanted to. Below them is a green creature with two yellow eyes, a hint of a smile and arms raised.

The contrast between the photographic quality of the sweet potatoes and the collagelike texture of the creature is striking. "Here is an objection to our overdependence on the sense of sight," explained Naoko Seki, a curator at the Museum of Contemporary Art Tokyo. "Emphasizing 'what is visible' is a modern value. Of the human senses, sight has always taken precedence over others. However, Katsura thought the sense of touch was also necessary to understand the world." "Jigazo (Musumejidai)" ("Self-Portrait [of my young age]"), produced in 1985, is a collage made out of red silk, cotton and a board. (Courtesy of Chiba City Museum of Art)

MATERIALS AS ART   In her later years, Katsura produced three-dimensional pieces using red silk. She made objects in the shape of everyday items, such as kitchen utensils and footwear, and covered them completely with the fabric. As a result, the objects ceased to appear useful and became mere shapes. "Jigazo (Musumejidai)" ("Self-Portrait [of my young age]") is an effigy of the artist, blurring the boundary between living things and objects.

In addition to red silk, Katsura was particularly fond of cork and cotton. And as she grew older, she became concerned about the condition of her works, according to art restorer Kyoko Koyano.

"Since the materials of her artworks are, as it were, artworks themselves, I understood her feelings well," Koyano said, adding that Katsura asked her to repair some pieces.

Materials were not mere parts to Katsura. She seems to have been driven by the notion that a "thing" becomes a "living thing" when a spirit enters it. One gets the impression she sought to create art in which a spirit might dwell. In this respect, too, you could say her work straddled worlds -- those of the animate and inanimate.